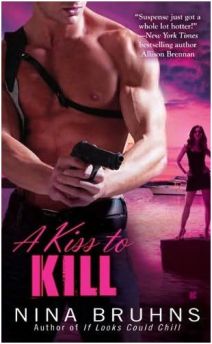 I am finally done with the Passion for Danger series by Nina Bruhns and I have to say that that was one heady and wicked ride that she takes the reader on.  I fell in love with all her characters that she managed to create so vividly that I felt like I was part of them when the series ended. I really do not know for sure whether the series has ended though it definitely does feel like it when the 3rd book in the series concluded.

Though this is the story of the irresistibly sexy, dark and dangerous Gregg Van Halen and Dr. Gina Cappozi, this is also where my much coveted for story of how Christopher Alexander Zane (Alex) and his long time best friend and FBI Special Agent Rebel Haywood also find their happily ever after with one another though the road to happiness is not an easy one for either of the couples.

For those who have read books 1 and 2 in the series they would already know that Gregg and Dr. Gina had become lovers in book 1 when Gina’s best friend Rainie had been taken by the Zero Unit of CIA to which Gregg also belonged to. Gregg’s mission had been to stop Gina from asking unnecessary questions by using whatever means necessary. What he hadn’t counted on was the fact that Gina would reach out and call to something deep inside of him no other woman had ever been able to touch and that she would become the center around which his world revolved.Coming from a broken family, Gregg had been forced to watch his father beat his mother when he had been young. Intervention had landed him in hospital. When his mother had died when he had been 5 years old and his father had started the vicious cycle with other women, Gregg had finally left home when he had just been 10 years old and survived long enough to land in the army and later at the Zero Unit of CIA.

Gregg had just been following orders when he had brought Gina to the Zero Unit’s headquarters. Gregg’s orders had been to leave to Kurdistan on a 3 week mission immediately afterwards and he had only learnt of Gina’s capture by Al Sayika upon completion of his mission when the trail had gone long cold. Knowing that all the clues pointed towards  him as the traitor and the mole within CIA hadn’t deterred him from his self-appointed mission of rescuing his woman and keeping her safe.

Gina however is a woman who has other plans for her ex-lover. Betrayal from the man she had fallen so helplessly and completely in love with during such a short period of time had cut deep into her. Her plan is to exact revenge on Gregg, kill him with her own bare hands. To meet this end, Gina had agreed to act as bait to draw and lure Gregg in so that the STORM agents who were protecting her would finally be able to capture the traitor who had played such a vital role in making all their lives miserable. What Gina doesn’t fully comprehend is the fact that Gregg had been with her all the way, even when she had been recuperating from her injuries at Haven Oaks, a STORM-owned sanatorium in central New York. And when push comes to shove, it is Gregg who rescues her from imminent execution, a plan put into motion by a desperate man trying to tie up all the loose ends.

Meanwhile, Alex who had been left at the altar by his fiance Helena has also been recruited as a STORM agent and because of his lingering issues after his capture and torture at the Al Sayika’s hands for 16 months, Alex had been assigned to guard Gina’s home; a duty from which he is relieved in order to investigate some newly received intel which puts him directly at the path of Rebel, the one woman he has vowed he would stay away from because Alex is sure that he would never be able to give Rebel what she definitely deserves. But Alex can’t help himself when Rebel is nearly blown to pieces, another present from Al Sayika, and with no fiance to hold his loyalty, Alex lets his baser emotions take control with the woman he loves and wants to stay away from.

Rebel needless to say is ecstatic when Alex finally takes her in his arms and shows her in reality what she has been craving for ever since she had laid eyes on him. And when Alex drops the bombshell that nothing more could come out of their encounter Rebel is heartbroken to say the least and even a bit enraged to find why Alex had actually contrived to marry her friend Helena and presumes to know what Rebel actually wants in life.

As STORM and Gregg closes in on the traitor, the story of Gina’s ex-fiance Wade Montana and Metro Police Detective Sara McPhee also starts to unfold though its more of a side story. Before the traitor is caught, suspicions fall on both Gregg and Wade who both in their ways had contributed unknowingly towards the imminent capture of Gina by Al Sayika. The final showdown between the good and the bad guys definitely delivered what I wanted with a shocking revelation for a villain in the end.

As right from the very beginning, I totally heart Gregg and love the way he protects his woman though he believes he is not capable of giving or receiving love because of his dark past. The man he has shaped into makes for a deliciously edgy and dark hero enough to spice up the dreams of even a rusted old woman. Alex though at times I felt like hitting him on the head a time or  two beautifully made up for it in the end. Though Gregg and Gina is my favorite couple from the series (might have something to do with the fact that I am irresistibly drawn to Gregg) Alex and Rebel do come as my second favorite couple with Bobby Lee and Darcy from the previous story in the third.

This is a great series worth your time if you are a fan of romantic suspense who can handle equal amounts of terror and sensual delights all packed into one.

In the mirrored film noir frames of the moving window, he (Gregg) searched her face for any sign of recognition. Or of alarm. And found none. Her eyes passed quickly over him.
But within himself, crouching right next to the anger that simmered and roiled in his chest, he felt a bone-deep physical recognition of her. And had a sudden, overwhelming need to put his hands on her. A need so potent and visceral it nearly sucked the breath from him.
He knew this woman, intimately. Knew her flesh and her fears. He had plunged deep inside her and felt her quake with the pleasure his presence there had brought her. And had felt her tremble with the fear of his absolute power over her.
He wanted to feel her quake and tremble again.
But she would never allow it. Never accept him again as she once had.
Because he had betrayed her.