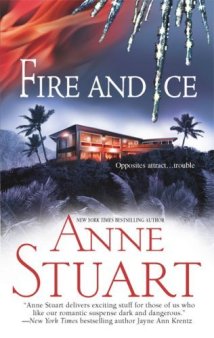 As all good things in life do come to an end, so I have reached the end of this highly entertaining romantic suspense series by Anne Stuart. Though I still definitely yearn for more of Ms. Stuart’s heroes, I would have to dig through some of her other books to find the fix that I am craving for even now. I hear that her House of Rohan series is really good and I am definitely going to try them out, as soon as I catch my breathe from the latest roller-coaster ride that I just disembarked from.

The Hero: 27 year old Hiromasa Shinoda or Reno is hardly one’s typical romance book hero. Reno is cousins with Takashi O’Brien, hero of the 3rd book in the Ice series which I reviewed earlier. Readers who have read or are reading the series in order would have come across Reno in Takashi’s story, and even then I found myself intrigued with the complexity of his character. Half-American and half-Japanese as well, Reno is the grandson of the head of the infamous Yakuza family, a family steeped in organized crime in Japan. Reno’s complexity doesn’t come from his mixed heritage, but rather the mass of contradictions that he actually is. Whilst Hiromasa Shinoda looks respectable and is a man with a high IQ with a degree in Engineering, the darker and edgier side of him known as Reno can most well be described as a punk Yakuza gangster. With long spiky hair that falls well below his waist colored in crimson red, and two teardrop tattoos on his high cheekbones and hard-ass attitude, Reno is the ultimate bad boy with a deep rooted animosity towards American women as his own American mother had abandoned him once she had grown tired of playing Yakuza royalty. Serving as the Committee’s newest recruit, Reno hardly fits in with the typical Committee material but shows his true potential when things turned quite rough in Ice Storm, the 4th book of the series.

The Heroine: Jillian Lovitz or Jilly as she is called by everyone close to her is 20 years old and a genius who has never had the chance to experience the stuff that normal childhoods are made up of. With a high IQ that had refused to sit idle whilst she experienced life, Jilly had graduated from high school when she had been fifteen, college when she was eighteen had never had the chance to develop normal relationships. With big brown eyes, a wide mouth and short blond hair and well around 6 feet tall, Jilly had always felt more like a giant around her five foot something, petite mother who had acted more like a spoiled child herself than an adult all her life. Jilly’s one solace in life had been Summer her half-sister who had always looked out for her and mothered her whom she misses terribly since she married Takashi and moved to Japan.

Storyline: It is Jilly’s yearning to experience life and the need to divest herself of her status as a virgin that ends in a disastrous one night stand which propels her to fly to Japan to drown her sorrows in the arms of Summer. However, unbeknown to Jilly, Takashi and Summer had gone into hiding to escape a bunch of mercenary killers who were gunning for their lives. And it is Reno who rides to her rescue on a mean looking Harley and whisks her away to safety whilst Jilly’s heart acknowledges the fact that in reality she had come to Japan wanting to seek Reno out, the man who had fueled all her adolescent dreams for the past two years. This time rather than international terrorists out to take the world, the danger that surrounds them rises too close to home for comfort and it will take every ounce of Reno’s willpower to keep his hands of Jilly whilst they run for their lives dodging killers and bullets as they race through Japan trying to figure out who and why they have been targeted.

The First Encounter: Jilly and Reno’s first encounter takes place at the end of Ice Blue, the story of Summer Hawthorne and Takashi O’Brien. Even with his deep rooted animosity towards American women, Reno is helplessly ensnared right from the first moment he lays his reluctant eyes on Jilly.

Time period: This story has a contemporary setting and takes place in the UK, Japan and later in the US.

Narrative Form: This story is told in the 3rd person form in both Reno and Jilly’s point of view for the main part of the story.

Awareness between the hero and heroine: What drew me to this story in the first place was the attraction that flares between Reno and Jilly at the end of Ice Blue. Even back then, Takashi and Summer had realized what was happening and had taken steps to avert someone like Reno from taking advantage of an innocent like Jilly. However that had not stopped either of them from dreaming about the other or wanting the other. Though Reno’s yearnings had been more sexual in nature whilst Jilly’s had been more dreamlike in nature, it is the white hot and undeniable attraction between the two that Reno certainly doesn’t want any part of that makes this book so damn attractive. Whilst Jilly spins dreams of the possibility of a happily ever after with the ultimate bad boy Reno, Reno is determined to keep his hands off from Jilly because he knows that she is more trouble than it is worth. But when push comes to shove and Reno has to keep Jilly safe, the close proximity proves to be Reno’s undoing where Jilly is concerned which makes this read truly worthwhile.

The turning point: Reno is someone who likes older women for the fact that they are more experienced and bring less unwanted emotion into the picture. But when he is unable to let go of the memory of the one encounter that brought him close to Jilly for the next two years, Reno knows that he is in more trouble than he had ever anticipated. With an all grown up Jilly getting up close and personal with him, it takes Reno everything he has to keep his hands off, until need obliterates everything else. For Jilly who has spun all her adolescent dreams on Reno it is just a matter of time before she hits the point of no return where Reno is concerned.

Again, what’s with these abrupt endings? I just don’t get it! The story flows so smoothly, you ache for the hero and heroine to get their happily ever after, and wham bam thank you maam, the ending just comes out of nowhere and slaps you on the face something fierce. I so dearly wish this weren’t so. I mean it would be nice just to leave us readers with a healthy dose of an epilogue (even a page or two would suffice) to tide us over and take with us images of the ending we had envisioned right through the story. *glum sigh*

She jumped when he put his hands on her, but she didn’t move away, and he placed one hand on her shoulder as he began to unzip the corset. He could feel her tremble beneath his touch, but she didn’t protest, didn’t move.
Another man might have had trouble with the complicated corset, but it came apart easily in his hands, and he tossed it to one side so that she was sitting with her back to him, in a mound of fluffy skirts and fishnet stockings and nothing on top. And he couldn’t help himself – he leaned forward and put his mouth against the nape of her neck.

Snap out of it, Reno!  he told himself. You’ve just managed to rid her of any romantic notions. Don’t blow it by thinking with your dick again.
The funny thing was, it wasn’t his dick that was giving him trouble. Yeah, for some crazy reason he still wanted to screw her when he should be concentrating on other things. But even more, he wanted her lying on the narrow cot with him, her body crammed up against his, her arms around him, her face against his shoulder, her heart beating against his.