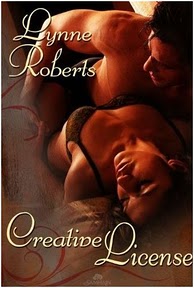 I came across this title when Cari Quinn did an author interview on her blog on its release day. Even as swamped as I was with books to read, the blurb of the book caught my interest and I was keeping it in mind to squeeze this read in somewhere to sample my first Lynne Roberts as Cari seems to have pretty much loved the story and of course the hero, Caleb. So it was a delightful surprise to wakeup yesterday to find that Ms. Lynne wanted me to review her latest release which turns out to be the book which I was hankering after as well! So onto the review without further ado.

Caleb Anderson is an artist hoping to make it big, barely making ends meet as he lives in San Fransisco following his dreams. The son of a father who was a teacher and a mother who had owned a day care, Caleb is as middle class as they come. With dimples in his cheeks, a body that can rival that of a Greek God’s and wicked green eyes and long dark blond hair, Caleb is every girl’s romance hero personified coupled with his fierce tenderness towards the woman he got married to, one drunken night in Vegas, 3 years back.

Lily McPherson is the blue blood daughter of an investment banker and a socialite who has had her life mapped out in front of her since she had turned 16 years old. Lily has a ten year plan which features law school, internship, marriage, children and then a home office, all in that order. In a relationship with Stewart, the son of her boss with both their families expecting their engagement soon, Lily though she feels as there is something missing in her life doesn’t let melancholy feelings get the best of her as she hides the passionate woman she is behind a facade that fools everyone around her.

Lily’s one indiscretion in her otherwise perfect and spotless life had come in the form of a hasty Vegas marriage to the wickedly sinful Caleb. The 12 hours and 22 minutes that they had been married had been the most fun and carefree moments of her life, but panic reined its ugly head as she had woken up in bed with her brand new husband and a big fake diamond ring on her finger. 3 years later, Caleb calls out of the blue bearing news that turns her world upside down – their annulment had not gone through due to a careless clerk who had not filed the proper papers. And it is Caleb’s request that she travel to San Fransisco to help him out in a matter which requires her presence that finds Lily travelling on a 6 hour flight to her one & only glorious mistake.

With 4 days of togetherness looming in front of them, even from the first moment Lily eyes her husband looking as delicious as ever, sparks fly and desire denied for so long burst forth refusing to be brushed aside any longer. And along with their explosive passion, so does rise feelings that both have refused to acknowledge till now. But once their precious time together comes to an end, it is up to Lily to decide whether she would turn her back on a life full of happiness and laughter with the man who sets her senses afire and heart aflutter by her side or head back to the bleak colorless life that awaits her in Boston, the “perfect” arrangement for someone like her.

Things that made this book rock my world:

Things that could have made this book better?

I think Creative License is just perfect the way it is! Loved my first Lynne Roberts to bits which I managed to read in just under 2 hours, because yes, it is that good!

“So, what does he look like?” (Sharon, Lily’s elder sister asks)
“Tall, a little over six foot, the greenest eyes you’ve ever seen and long dark blond hair.”
“Long hair? You married the cover of a romance novel?”

Lily paused behind a wall of people watching for the machine to eject their luggage. Something like gravity prickled her spine, and she turned to look behind her. Lily’s breath caught in her throat. Caleb walked toward her. She’d never forget that sexy stride. His blond hair was pulled back, emphasizing high cheekbones and bronzed skin. The shadow of stubble along his jaw only improved his rugged good looks. Her hand itched to stroke his face, to feel the rough texture against her skin. Lily’s stomach did a quick flip and she had to remind herself to breath. Splashes of color decorated the jeans encasing Caleb’s long legs. A white T-shirt stretched over his muscled chest but a long-sleeved flannel shirt hid his arms from view.

Recommended highly for those who love their erotica with a lot of emotion wrenching goodness in the mix. A story that is just not well done erotica, but so much more.