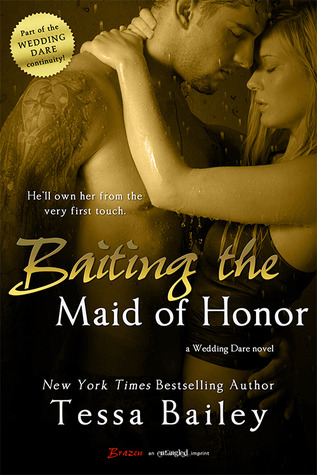 Julie Piper is the type of person who defines people pleasing behavior, not in a bad way mind you. Julie is the kind that is enthusiastic over wedding planning, making people feel better, perhaps because there is a loneliness inside of her that people, those that are even closest to her don’t realize. When Julie encounters the big, bad and brazen Reed Lawson, the antithesis of everything that she looks for in a man, it is not just her hackles that are raised but her desire levels to be taken, possessed and taken yet again.

A SWAT commander by profession, Reed knows what its like to be looked down on as  bug that crawled from under a rock. It had never bothered him prior to this, thick skinned from growing up on the wrong side of the town. But when Julie looks at him that way, something inside of him wants to roar, the beast inside of him wanting to claim her as his and only his. The thought itself frightens him, the concept of being vulnerable to anyone, but even that doesn’t stop him from seeking Julie out, and the more he does, the more he falls for everything about her, not to mention the mind blowing variety of sex that they both have which keeps him coming back for more.

Four stories happen simultaneously in the Wedding Dare series. Julie’s story is one that is entwined with the other stories as well. I would love to pick up the novel written by Samanthe Beck, Best Man with Benefits. Perhaps one of these days I will. While Baiting the Maid of Honor worked for me on so many levels, I did wish that the backstories of the characters were a bit lengthier. I would have loved to see Julie deal with her family issues – those sounded deep and like ones that would tend to leave emotional scars of the kind that cannot be just shrugged off. However, maybe, the length of the novel didn’t actually give the time to indulge in those issues which definitely was a lacking factor for me.

The rest of the aspects of the story worked, and boy did they work well. A SWAT commander with tattoos over his over the top delicious bod was enough to make this reader go crazy! Reed’s take charge attitude was a definite turn on, not to mention the dirty talking he does, and oh so well. Julie, being the direct opposite to his roughness, feels like the tall and cool glass of water that soothes your parched throat on an especially humid day. She is that to Reed in more ways than one and I loved her for all of it. If there was anything that I would wish to change about the sex scenes, its the way Reed tends to call Julie “baby”. I think almost all of Tessa Bailey’s heroes have a tendency of doing that, and perhaps its just me, but it is kind of off putting.

Recommended for everyone who loves the good variety of smut with the emotional wallop!

Final Verdict: Hot enough to singe your sheets off. Tessa Bailey delivers dirty of one of a kind!

“Help with what?” The sound of wind whispering through the trees nearly swallowed her husky question. “My hair?”
Damn. It hadn’t been his imagination. If she hadn’t turned tail and traipsed her way back inside by now, this instant attraction didn’t end with him. Was it possible a hot-to-trot sex kitten existed under that silk-and-pearls ensemble? Only one way to find out. Settling his hands on either side of her, he brought his body within inches of hers. “I don’t do hair, pixie,” he rasped against her ear. “Unless you’d like it pulled.”

“Aren’t you going to at least kiss me first?” No answer. “I’m not playing coy or anything, mind you…I just reckon, well, that it’s the decent, honest thing to do is all. Under the circumstances.”
He sighed loudly and she felt him rise to his feet. His larger frame crowded her against the door, fitting them together in a way that was blatantly indecent. She felt his arousal, thick at her belly. Her breasts flattened against his chest in a way that felt sinful and divine simultaneously. Warm breath puffed out against the top of her head.
“Kissed where?” His voice was a rough, almost inaudible whisper that bathed her in blistering heat. “Your mouth? Or the slick little pussy you’re hiding from me?”

“Both.” She swallowed hard, unable to keep the image of Reed at bay this time. His mouth. His tongue. She wanted them so bad it pained her. “Kiss me in both places.”
She felt a ripple of shock go through him, and her body answered it. With a loud groan, his mouth came down on hers, hard and punishing. He kissed her almost angrily, forcing her lips apart and sweeping his tongue inside in a way meant to provoke her. Incite her. Julie couldn’t get enough of his hard mouth moving like a brand over hers. She dug her fingers into the collar of his shirt and tugged him down as she pushed higher on her toes to meet him. They kissed furiously until breath ran scarce, pausing to draw air and bite at each other’s lips.

She squeezed his hips between her legs and rode out her orgasm, his hands digging into the flesh of her bottom to help her get as close as humanly possible while her hips bucked.
His hard mouth worked over hers, swallowing her strangled cries, growling and thrusting his tongue deep with each of her frantic movements. When she came down from her climax, breath racing in and out past her lips, she heard his muffled whisper at her ear. “Oh baby, I could have come, just like this. With your fuck-me thighs opened up wide for me on the door. Now?” He laughed darkly. “Nothing will satisfy me unless I taste all that heat first.”

“Would you like me to take off my pants now so you can really be impressed?”
His gruff question jolted Julie out of man-candy fantasyland and she dragged her gaze up from the large swell behind his fly, trying desperately to ignore the needy tightening in her belly. It enraged her that she could still feel desire for him after the stunt he’d pulled. “By all means, take the pants off. It’ll make it much easier when I castrate you.”
Julie ignored the fluttering in her chest when his full lips tilted at the ends, his amusement vanishing just as quickly. “Now that would be one hell of a shame.” He took a measured step in her direction. She refused to give up any ground when he stopped a breath away and dragged his teeth over his bottom lip, eyes tracking over her heaving breasts. “You were enjoying it so much a minute ago. When you rode it like you owned it.”

“Reed. I’m…I’m going to fall.”
“No. You will not fall. You will stay right there until I’m finished.” His thumb found the sensitive area again and smoothed over it, once, twice, as if coaxing it to life. Then he began to stroke it rapidly with the pad of his thumb. Julie couldn’t form a single thought as the orgasm came hurtling through her system, blasting her with such blissful heat she became unaware of anything but the place Reed made contact with her body. Her head fell forward as she rambled unintelligently, eyes blind as the area between her legs contracted and released over and over again. She felt his teeth sink into the flesh of her ass, then his tongue lick over the spot to soothe the sting.

With one powerful drive, Reed finally entered her. The pressure was so great, so delicious, that Julie bit her lip and screamed, hands scrambling for purchase on the wood bureau top. Through partially blind eyes, she looked up at Reed’s reflection to find an expression of undiluted pleasure on his face. But it quickly transformed into a need for more, as he wrapped her hair around his fist and jerked it back.
“You will never dance like that again. You will never hike your skirt up again. Never.” He pulled out slightly, then thrust back into her hard. “Not unless it’s for me. Is that understood?”
Julie cried out. “Yes.”

“Hiked your skirt up for me, is that right? Did you think you’d get away with that?”
“No.” Her chest shuddered. “I don’t know.”
“You don’t know?”
Julie leaned down and tried to kiss him, but he jerked back, wanting an explanation. She finally answered on a breath. “I didn’t want to get away with it.”
He groaned his pleasure. “That’s what I thought. Mine from the beginning.” Jerking the robe off her shoulders, Reed grasped her buttocks and sat her down on his erection, filling her to the hilt.