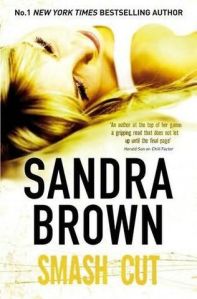 Sandra Brown has always been a favorite author of mine. With her first book ‘Relentless Desire’ which was published in 1983, she started off her career as a romance book author as most of my favorite authors. Later with the book ‘Slow Heat in Heaven’, she started on the genre of romantic suspense, some of which have been pretty great stories. Smash Cut, her latest such thriller is no exception to this rule. With two great characters and a complex plot with enough twists to keep us going, Smash Cut delivers on all fronts.

Derek Mitchell is a criminal defense lawyer with a reputation well-earned for preventing society’s scum from ever having to see the walls of a prison. Julie Rutledge, the mistress of millionaire Paul Wheeler, is the owner of an art gallery who witnesses the murder of her lover right in front of her.

Entering the story that unfolds of course is the slightly off-balance family that every rich guy leaves behind. Paul’s brother Doug and his wife Sherry with their son Creighton Wheeler who is very rich in his own right without having shed a drop of sweat to show for it and spoiled rotten to the core has a passion for movies unlike anyone has ever heard of.

From the start, Julie accuses Creighton of plotting and executing the well-laid out plan of murdering Paul, as Creighton was the sole beneficiary of Paul’s will, though the motive seems to be a weak one in the face of all the millions that Creighton has already inherited from another set of his grandparents.

Derek is hired by Creighton’s father, in case the need for a defense lawyer arises, though Creighton has a rock solid alibi for the day of the murder. Julie, wanting to prevent Creighton from walking free of this heinous act, tries to prevent Derek from being Creighton’s lawyer, which somehow in the end backfires on her.

Creighton’s evil streak is slowly revealed, while Julie and Derek join forces to out run the brilliance of a plan well laid out by a master of evil planning, to free Julie from the knot that slowly seems to tighten around Julie, pointing all fingers at her for the murder of Paul.

Ultimately in the end, Creighton is caught in the act of ‘tying up one of the loose ends’, and with a huge surprise in the end, which I am not going to spoil for everyone here, ties things up.

Although this book is of the genre ‘Romantic Suspense’, there is actually very little romance involved, but rather a great story of how pure evil can thrive in the minds of people society never thought capable of.