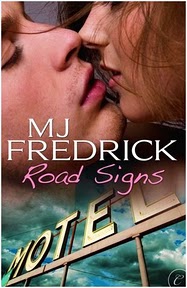 I found M. J. Fredrick’s latest book Road Signs which is to be released on the 14th of this month up for grabs at Netgalley to my ever loving delightful surprise. I was glad for a chance to receive an ARC because after my first encounter with M. J. Fredrick’s writing style when I read and reviewed her romantic suspense novel Breaking Daylight, she has landed on my list of authors to look out for. Road Signs being a book of my favorite friends-to-lovers trope was just the icing on the cake for me when I picked up this read.

27 year old Cameron Trask has being in love with his best friend Willow Hawkins since high school. Willow, an only child whose mother had worked two jobs to keep a roof over their heads, had basked in the warmth that had been offered up by Cameron’s family who had welcomed Willow with open arms. Willow’s beautiful mother’s tendency to stray towards the wrong kind of man for all the wrong reasons has left its emotional scars on Willow who shies away from commitment and works hard towards building a life for herself just so that she can stand on her own two feet and would never have to rely on a man for security.

But a moment of lapse in judgement has Willow regretting her impulsive decision to visit her latest boyfriend’s parents for Thanksgiving and before she knows it she calls up the one person whom she trusts more than anyone else in her life to come and get her. Cameron drops everything that he has lined up, adjusts his plans on travelling to Seattle for a job interview and drives down to collect the one woman who matters more to him in life than anyone else. Though Cameron has never had the guts to come outright and confess how he feels to Willow, it doesn’t make his plans of severing ties with her and moving away so that he can finally, hopefully get on with his life any easier.

When Willow finds out how she might have screwed up Cameron’s chance of getting a job that would finally mean something to him, Willow convinces Cameron to set out on a road trip that would take them to Cameron’s destination. From the moment they set out, one thing after another goes wrong, bringing out opportunities for Willow to see how her best friend whom she has seen very little of for the past couple of weeks has changed so much, looks more appealing and has her thinking wild thoughts of them entwined together doing the very thing that she has sworn she wouldn’t subject their friendship to.

Cameron knows that this road trip would be the last chance he would ever have of making a move and coming out with how he feels about Willow. For someone like Cameron who has the term cautious engraved onto his forehead, this is easier said than done. However, the close proximity that the trip places them together with feelings that they have both long kept under the rug sweep onto the surface gaining momentum until they both ultimately surrender to each other. Even then, Willow’s insecurities when it comes to love and commitment rises to the surface which she has to deal with before these two finally find their happily ever after.

I liked the premise of the story, a road trip embarked upon by best friends, both of whom who want what’s best for the other. Willow turned out to be a heroine I would have liked to hit on the head a couple of times because of her obstinate nature that kept her from what turns out to be the best thing in her life. Cameron is such a sweet hero, who won my heart simply because his love for Willow shines through each and every action of his from the way he rides to her rescue to the way he just simply wants her to be happy with life. Cameron makes for such an endearing hero with an abundant reserve of patience which he really has to call on when dealing with someone as skittish as Willow when it comes to love, commitment and happily ever afters.

Though at times there was a disjointed feel to the story, in the end it proved to be an enjoyable contemporary romance that takes the reader on a journey of discovery of how the feelings between Willow and Cameron finally meet on the same level giving them both a taste of a well deserved happily ever after. Recommended for fans of contemporary romances that would make for a light quick read with a hero you would immediately fall in love with, fans of M. J. Fredrick and for fans of romances of the friends-to-lovers trope.