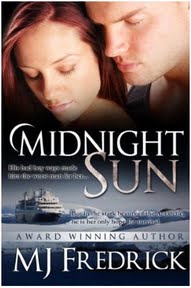 Midnight Sun is the latest contemporary romantic suspense release by M. J. Fredrick. Midnight Sun starts in a deceptively simple manner and lulls the reader into a false sense of security before the adventure aspect of the novel kick starts with a bang and refuses to let up until towards the very end. The story starts off with Brylie Winston leaving the hotel room in Hobart, Australia where she spends the night with a man for the first time in a year and half, always paying heed to the caution that rules her life until she meets the charming Marcus who manages to practically knock her proverbial socks off with his sheer charm and sexuality.

Come morning, Brylie more than regrets succumbing to Marcus’s well-played seduction which had sent her senses spiraling as she finds out that Marcus is none other than her boss and the youngest son of the Delvins who owns and operates the ice breaker turned cruise liner on which Brylie acts as head chef. For Marcus, the cruise trip to Antarctica is his way of saving face after his latest scandal and when he finds out that the red head who rocked his world the night before works for him, things start looking up for Marcus until he finds out that Brylie has no intention of indulging in a repeat performance.

However, Marcus is not one to give up and before long, Brylie finds her defenses crumbling in the face of Marcus’s true personality that comes to light as they spend time together. But before their purely sexual acquaintance can go any further, the cruise liner comes under attack by pirates who are willing to do anything to see that their demands are met. Its by pure luck that Marcus and Brylie manage to hide and outwit their captors until Marcus is forced to give himself up, sacrificing himself for the rest of the passengers on board for whom he feels responsible. Its the sheer bravery and quick thinking on both Brylie and Marcus’s part that eventually saves the day and not a minute too late at that.

Midnight Sun is a well rounded addition to M. J. Fredrick’s already impressive collection of romantic suspense novels. This one offers a hero who is not well versed in the art of defense and guns and the whole lot but still manages to think on his feet and tackle the problems they face, even though his family thinks of Marcus as someone who will never take responsibility seriously. Marcus suffers from “itchy-feet-syndrome” and it is only when it comes to Brylie and the hair raising couple of days that they go through that Marcus finds his anchor in life. It is the situation that both Brylie and Marcus finds themselves in that eventually creates the unbreakable bonds of intimacy which otherwise may not have happened.

Brylie is a trademark M. J. Fredrick heroine. Smart, capable, independent and yet vulnerable because of her past, Brylie is a heroine worth admiring as she on many occasions proves herself beyond capable in handling a chaotic situation with both feet planted firmly on the ground. Though Brylie tries hard not to fall for Marcus, she is no match for his arousing kisses and touches that at the same time serves as the healing balm to soothe her wounded heart and pride. And Marcus in turn finds in Brylie a reason to strive to be more and give love and commitment a shot in his otherwise sporadic existence.

Filled with adrenaline pumping moments and those sensually stirring scenes of passion that never fails to evoke all the right kind of emotions, Midnight Sun is recommended for those who love romantic suspense in unusual settings. And believe me, Antarctica is as unusual as it gets!