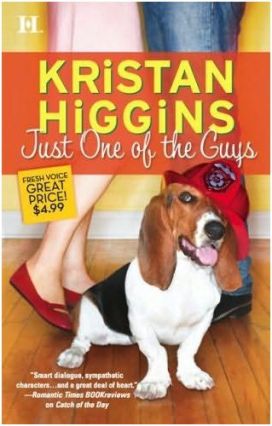 Just One of the Guys by Kristan Higgins is a book that always ends up in one recommendation list or the other. And the hero Trevor James Meade seems to be a real hit amongst the ladies so much so that I decided to give this book a try because when it comes to Kristan Higgins you are always in for a laugh-fest no matter what.

Chastity Virginia O’Neill is the youngest child and the only daughter in the O’Neill family. She is a plus-sized heroine if there ever was one and a jock to boot, a mark left over as a result of growing up and competing with 4 brothers in the household. After moving back to her hometown of Eaton Falls, Chastity is determined that she would find someone to fall in love with, someone to settle down with and have 2.5 kids with, even if the man who holds the key to her heart remains completely oblivious the ferocity of her feelings towards him.

Trevor James Meade can almost pass off as Chastity’s fifth brother because Trevor is almost like a son to her parents, biology be damned. Chastity falls in love with Trevor during the darkest period of Trevor’s life and she holds her feelings towards Trevor close to her heart, the one time that she and Trevor slept together a memory that she treasures and remembers all too often for her peace of mind.

However Trevor acts as if the thought of her settling down with someone else means nothing to him and goes as far as to encourage her to date and find someone who would provide her with everything her heart desires. And when the sexy new doctor in town notices Chastity and they both start dating, Chastity couldn’t be happier, or so she tells herself until everything starts falling apart around her, forcing Chastity to face the reality of her feelings and move on.

I had a hard time classifying Just One of the Guys as a romance. Chastity and Trevor spends the majority of the book apart from each other even though they live in the same town and run into each other almost every day. There were no romantic interactions between the two except for one very invigorating “nipple” scene that brought to light Trevor’s obvious attraction towards Chastity. I was disappointed because for the whole duration of the novel, Chastity and Trevor both date other people, sleep with other people and Chastity gets ready to even say her I-do’s before she comes to her senses and stops herself from settling for the second best.

Trevor was delicious, as delicious as everyone raves him to be. And I loved him. I truly did. Kristan managed to do a mighty fine job of bringing him to life through Chastity’s eyes, and I loved how his character turned out to be. But I did want to slap him a time or two because he seemed to stubbornly hold on to his belief that if he and Chastity were ever to get together, he might lose her and that is one moment in time that he doesn’t ever want to face.

The reason why I hesitate to read books written in first person is the fact that the reader misses out a lot on the point of view of the other characters involved in the story. I especially missed having Trevor’s take on things, his feelings or non-feelings towards Chastity and what makes him so hesitant to stake his claim on a woman he seems to look out for in all the little ways that matter.

As always, Kristan gives the reader a healthy amount of laughter, the antics that Chastity gets involved in being moments that still bring a smile to my face. Just One of the Guys is the story of how Chastity as a character grows and becomes more, how she learns to face the truth in the light of the day, regardless of whether she might or might not like what she sees. And I loved the story of how Chastity’s mother moves on, against all odds and against all the stonewalling she receives from both her ex-husband and her children for whom their mother moving on is something of an alien concept.

There were so many emotional moments in the story, some of them rendering me to tears and other times I seriously had a lump the size of an island in my throat. Those were the moments that defined the story for me and I had a hell of an enjoyable time reading Just One of the Guys.

Just One of the Guys is a book that can make you laugh, bawl your eyes out and smile through your tears because Kristan is an author who demands no less, and if you are a fan, I cannot recommend it to you highly enough!

Then before he could break the moment, before he could turn away, I kissed him, and he didn’t stop me. Instead, he pushed my hair out of my face, and he kissed me back, gently, sweetly, his hand slipping behind my head, his lips moving just right against mine, smooth and warm. I gripped his shirt and sighed against his mouth, and knew that as long as I lived, this would be the one perfect kiss that I’d remember forever.

“So you can’t marry Harry, Mom! Not if you still love Daddy!” I sound like a ten-year-old, but I can’t help it. Buttercup comes over to me and puts her head on my lap.
“Love gets used up, Chastity,” Mom says gently, reaching up to smooth my hair. “If it’s not returned, it gets used up.”