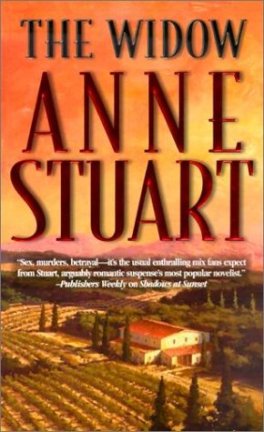 Sigh. Count on Anne Stuart to always deliver a story worth sinking one’s teeth into. Though most people on Goodreads who have read and rated this book doesn’t seem to like it much, I found the story hard to put down and enchanting at best and thought provoking as well. Needless to say I enjoyed the heck out of reading this one.

30 year old Charlotte Thomas (Charlie) receives the news of the death of her ex-husband Aristide Pompasse 5 years after she leaves him and has started a successful life of her own. Knowing that as the widow and beneficiary of his will she would have to face her past and the demons that she keeps at bay at any cost, Charlie makes her way to Tuscany, Italy to once and for all deal with everything she had left behind.

It is in Tuscany and at Pompasse’s residence that Charlie runs into the 35 year old Connor Maguire who poses as an insurance consultant to get what he wants out of the supposed tragedy behind the death of a man who had surrounded himself with a harem of young women, a man who had been considered as one of the greatest artists of his time.

Charlie would rather cut off an arm than admit to herself or anyone else for that matter that Connor ruffles her feathers and gets under her skin in a way that no man before him ever has. His confronting nature coupled with his rough around the edges appeal makes Charlie want the unthinkable and crave for something she has never had before.

Connor is willing to do whatever it takes to profit from the story behind the death of the legendary artist, whose uptight and closed up widow makes him think of things better left unsaid. Connor is not going to leave any stone unturned in his attempt to get what he wants, be it even if seducing Charlie is what it’s going to take. However, things hardly go according to his plan as his fascination with Charlie and what she represents continues to grow together with his hunger to have her in every manner possible for a man to have a woman.

The Widow by Anne Stuart makes for an awesome read, the details of Charlie’s past makes for a shocking and titillating read. The past that Charlie tries so hard to escape from inevitably catches up with her and in the end lands her life in danger as it becomes clear that someone is out for her blood and that death is the only inevitable conclusion behind the craziness that ensues.

I will never know how Anne Stuart does it; and she does it every single time; she manages to come up with heroes of the calibre that most writers are afraid of creating and gives them an appeal that is hard to escape from. True to that fact, Connor makes for a very appealing hero, whose ruthless nature makes it hard for a fan of such heroes not to fall head over heels in love and lust with him.

Charlie is the character that makes you think, a woman who had married an old man whom she had looked up to as a father figure and protector who had ended up killing her on the inside and stealing her very soul in the process. Her escape from him hadn’t come without a price though people who know of her would hardly understand that by looking at her. Needless to say, Charlie’s character was one that called to me and made me empathise as well as fall in love with her as the story continued on its path.

Highly enjoyable, The Widow is recommended for fans of contemporary romantic suspense novels by Anne Stuart and for those who like myself love a little bit of ruthlessness in their heroes which means seeing them fall in love is just that much more fun!

Charlie wouldn’t have thought a kiss would be earth-shattering. But then, she would never have let anyone like Maguire kiss her if she had had half a chance to avoid it.
But she didn’t. He wrapped one arm around her waist, pulling her up against his dusty, sweaty body, put a hand behind her head to hold her still and simply kissed her, openmouthed, using his tongue.
And she closed her eyes and kissed him, and he opened his mouth for her, and this time it wasn’t firm and dry, it was hot and wet, and she felt a jolt all the way down her body. For half a moment she tried to pull away, and then simply sank against him, pulling her hands from beneath his T-shirt and sliding them around his neck, pulling him closer. She felt his hands skim her face, as if he was afraid to touch her, and then he did, cupping her face lightly, as he met her unpracticed kiss with such profound gentleness that she wanted to weep with longing.

She didn’t even know how it happened. She turned and leaned her back against the door, looking up at him through the thick shadows. And then the shadows were blotted out, as he placed his body up against hers, hip to hip, chest to breast, mouth to mouth.
She was hungry for it. Hungry for him, when she had thought it was something she’d never feel. He tasted like rain and repentance, of sweet sin and the night air, and she closed her eyes and kissed him back, shivering in response.

He was moving a little faster now, and he heard that breathless catch in her voice. She was climbing again, and this time she knew where it would lead. And she wasn’t sure if she was ready to go there again.
But he was. He wanted her with him. He wanted her convulsing around him as he spilled inside her, and he wasn’t going to come without her.
“No,” she said. The first time she had said no all night.
“Hell, yes.” He reached between their bodies and touched her, hard.
She was absolutely silent this time as the climax hit her, clenching around him, as wave after wave of release drained her body.
And he followed her, letting go, holding nothing back.