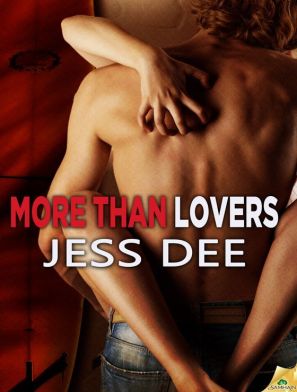 More than Lovers by Jess Dee is the second book in her delectable erotica short story series More Than. Consisting of three books, it was only when I started on the second one that I realized that these three novellas are loosely connected to each other through one of the protagonists in each story.

More than Lovers follows the neighbors with benefits trope or rather where you have a neighbor hottie that you can’t help but salivate over. Charlie Hudson and Sara Deacon have been involved in an arrangement where they have sex with no strings attached for more than eighteen months. While Sarah is the smart and brainy heroine who has a job to match her education, Charlie leads a seemingly relaxed lifestyle by making a living through surfing and teaching people how to surf.

More than Lovers kicks off when Charlie tries to set up Sarah with three dates which might lead to the kind of relationship that she wants with a man, a long lasting and fulfilling one. But each date just throws the light on just how well suited both Charlie and Sarah are for each other, if only Charlie would be willing to let go of the prejudices holding him back when it comes to contemplating a future between him and Sarah.

More than Lovers turned out to be more well rounded than the first book in the series. And though Sebastian is still my favorite, Charlie does come close with that effortless sex appeal that courses through the story with just his mere presence alone. If these two books are anything to judge this explosive short series by, I would say Jess Dee has definitely struck where she wanted to hit with these delectable stories. Definitely recommended for fans of the genre!

Final Verdict: Smut of the variety you can never get enough of!

“Fuck,” he rasped. “You tie me up in knots.”
Needing to connect with him somehow, to feel him on something more than a physical level, she looked up at his face and faltered at the emotion she saw in his eyes.
He stared down at her with such reverence, such adoration, her heart tripped and then soared.
There. That. It was all she needed. All she wanted. His expression filled the part of her soul that had hollowed in his absence.

And that was the last thing she did to him. The second he was sheathed, Charlie lost it. He had her on her back on the floor in seconds. Her sexy surfer dude paused just long enough to shove her skirt over her hips and bend her knees to her waist, and then he was inside, pounding into her, perspiration dotting his forehead.