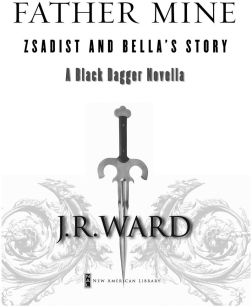 Father Mine, a novella set in the Black Dagger Brotherhood series is a story that I somehow seem to have missed out on when I first started reading the series in a frenzy. Anyone who has read my reviews on the books in the series would know that Zsadist is by far, my most favorite hero, and it is with excellent reason.

In Father Mine, the focus is on the continued struggle Zsadist has in terms of his past. A past that is as horrific as they come, where he had been taken as a blood slave, kidnapped at a tender age, and all sorts of atrocities subjected to him by the female that had kept him captive.

Zsadist comes with a wealth of pain in his heart, a soul that had numbed down in order to protect himself, an anger that had been destructive in its force and zeal that had simmered down upon mating with Bella. Even that had not been the easy journey that most romance stories would have made out of it. No. Zsadist had to work for every inch of peace he carved for himself, and the pregnancy along the way had just been another curveball that life had thrown his way.

It is in Father Mine that Zsadist’s past once again rears its ugly head in the form of nightmares that are all too realistic for him. Even though Bella knows that Zsadist’s inability to connect with their precious daughter Nalla comes from elements of his past, she has no idea of the depth of the horror that still has the ability to lock him down and get the best of him.

I believe that Father Mine and its conclusion was a much needed one in terms of Zsadist and Bella’s relationship. JR Ward’s love for Zsadist’s character shines through whenever she writes about him. Not that she doesn’t give it her all when it comes to other characters. But there is something special about the way she takes care of Zsadist, which is perhaps one of the reasons why a large percentage of readers fall, and fall hard for Zsadist and remain Zsadist loyalists throughout the series.

Bella’s insecurities as a woman who has given birth, whose physical and mental health had been subjected to a whole lot of ordeal in the process is also taken into context. The way Zsadist erased every single one of her doubts was just the icing on the cake when it came to this novella.

Loved, loved, loved this novella. An excellent installment in terms of Bella and Zsadist’s story to give their story the ultimate conclusion. Because just like real life doesn’t serve you with a happily ever after on silver platter, this made their love, pain, and struggles all the more believable and their happily ever after that much more worth it.

Recommended for fans of Zsadist!

Final Verdict: Sheer perfection is Father Mine in every single sense. Nothing more, nothing less.

He moved her hand up and down on his shaft. “I’m desperate to touch you again. All over.” She came closer to him, moving through the sheets. “You are?”
“How could I not be? You’re the most perfect female I’ve ever seen.”
“Even after—”
He shot forward and pressed his lips to hers. “Especially after.” He pulled back so she could read his eyes. “You are just as beautiful as the first time I saw you in the gym all those nights and days ago. You stopped my heart then—just froze it in my chest. And you stop it now.”

“Feel me,” he groaned, arching into her. “Feel me and know—Oh, God.”
She felt him, all right. Wrapped both her hands around him and stroked him up and down, riding his hard length.
“Is this good for you?” she whispered.
All he could do was nod and moan. With her gripping him like that, surrounding him with her palms, working him, his brain had pretty much shorted out. “Bella . . .” He reached for her with his bandaged hands, then stopped. “Damn gauze—”
“I’ll take it off for you.” She pressed her lips to his. “And then you can put your hands wherever you like—”
“Fuck.”
He came. Right then and there. But instead of feeling let down, Bella just laughed in the deep, throaty way of a female who knows she’s about to get sex from her male.

“You sure you’re going to be okay with this?”
If it meant she could be with him as his shellan?
“Nalla will be fine. She’s just next door if she needs me, and she’s started to sleep through big hunks of the day so . . . yes, I feel all right about it.”
“You’re . . . sure?” Bella looked up at him.
“Yes. Absolutely sure—” Z threw down his shirt, dematerialized right at her, and took her down on the bed, all but tackling her. His bonding scent went crazy as his mouth ground into hers and his hard, heavy weight pushed her down into the mattress. His hands were rough with her nightgown, ripping it as he wrenched the two sides apart. As her breasts were bared, he growled deep and low.

“Shut up and get inside of me,” she barked, grabbing the back of his neck and pulling him down to her lips.
He roared and punched into her core, the penetration a bomb that went off in her body, sparks shooting through her, igniting her blood. She gripped his ass hard as his hips jackhammered until he followed where she was, coming in a massive, full-torso contraction.
The instant it passed he threw his head back, bared his fangs, and hissed like a great cat. Arching back into the pillow, she put her face to the side, giving him her throat so that he—
As Zsadist struck hard and deep, she orgasmed again, and while he drew on her vein the sex pounded on. He was even better than she’d remembered, his muscles and bones churning on top of her, his skin so smooth, his bonding scent blanketing her in that special dark spice.

When he moved down to her stomach she started to get hot and restless again, and he smiled up at her. “Have you missed my kisses, darling mate? The ones I like to give you between your thighs?”
“Yes,” she choked out while anticipation shivered through her. Given the erotic little grin on his face and the evil cast to his yellow stare, he was once again a male with plans and a wide-open schedule.
He rose up on his knees. “Open your legs for me. I like to watch you—Oh . . . shit . . . yeah.” He rubbed at his mouth like he was warming the thing up. “That’s what I’m talking about.”

“Nalla?” he whispered as he bent down.
His daughter pursed her little lips and held on even stronger.
“I can’t believe that grip of hers.” He let his forefinger brush lightly on his daughter’s wrist. “Soft . . . oh, my God, she’s so soft—”
Nalla’s eyes flipped open. And as he looked into a stare the exact golden color of his own, his heart stopped. “Hi . . .”
Nalla blinked and waved his finger and transformed him: Everything stopped as she moved not just his hand, but his heart.
“You’re like your mahmen,” he whispered. “You make the world go away for me. . . .”

She was on her way into the nursery when Z came through the door. She couldn’t help beaming at him.
“Your cast is off.”
“Mmm-hmmm . . . come here, female.” He walked over to her, wrapped his arms around her, and bent her backward so she had to grab onto his arms to stay upright. He kissed her long and slow, rubbing his lower body and his huge erection into the juncture of her thighs.
“I missed you,” he purred against her throat.
“You just had me only two hour—”
His tongue in her mouth silenced her, as did his hands, which ended up on her butt. He carried her over to one of the windowsills, propped her up on the molding, unzipped himself, and—
“Oh . . . God,” she groaned with a smile.