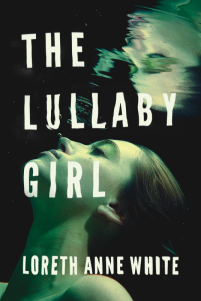 The Lullaby Girl by Loreth Anne White is the second book in the Angie Pallorino series, books centered around the lead female detective, aka Angela Pallorino (Angie). These are not standalone books, so if you want to immerse yourself in the ‘dark’ escape that this series provides, you will have to read the books in order. I say dark escape because Loreth’s books delve into the darker side of suspense with just enough romance going for it to suit readers like myself.

The Lullaby Girl begins two weeks or so after The Drowned Girls end, rather eventfully I must add. With Angie taking down a serial rapist turned killer (Spencer Adams) working her now life partner (of sorts), Sergeant James Maddocks, Angie’s life had considerably turned upside down since the hunt for Spencer had started. Angie, who had then being working sex crimes, had been partnered with James, the man she had tied to a motel bed and drowned herself in him on her way to oblivion – Angie’s method of escape from the voices that hound her.

Since then, Angie and Maddocks had managed to bust wide open a case that has all the elements that makes society gasp in indignation and fear. A rapist & killer who mutilated his victims, who had found easy pickings aboard a ‘pleasure vessel’ known as Amanda Rose, which had also exposed dirty politicians that had benefited from the operations.

While Angie had been placed on leave until the investigation into the culmination of the Spencer Adams angle in the case had ended, Maddocks meanwhile had continued the probe into the human trafficking of young girls and how far the tentacles of the case reaches.

Angie had in the meantime, started inquiries into her childhood, the lies which had pretty much defined her existence having come out into the open during the strenuous hours spent on the case. It is as Angie digs her heels into finding out more, that two detectives seek her out on a cold case of a DNA match with Angie’s, bringing home the possibility that Angie must have family somewhere that could possibly have been looking for her all these years.

With her position as a detective in the department at peril and placed in the social media division, Angie has no choice but to go along for the ride, if only for the ‘benefits’ being on the job would bring in the line of her own investigations. But resent the punishment, she definitely does.

So finds Angie going along with the investigations into her past, while Maddocks pursues the leads on his case, which takes on Russian organized crime amidst international human trafficking angle which brings takes the case to a whole new level. But it is when these two separate and distinct investigations collide that things take a turn which brings the whole house of cards tumbling down.

The Lullaby Girls proved to be just as engrossing a read as it’s predecessor. Angie’s character was just as thorny, perhaps more so owing to the different upheavals that her life has been subjected to along the way. Angie doesn’t see the destructive path she is on, though it is hard not to empathize with what she’s going through as well. She has had her whole world turned upside down, and to come to know that she had had a life that was vastly different from what she remembers to be her childhood, enables her to understand her affinity with crime solving and sex crimes in particular.

The inability to see the “difficult” side of her character prevents Angie from seeing the punishment she is given at the department for what it is; that it had been owing to her actions and behavior along with her strained relationships with her partners, and her lack of ability to follow orders while keeping a level head about it.

This of course makes Angie lash out, and lash out she does, which makes things pretty difficult for Maddocks. Because for Angie, there is nothing more vulnerable than letting someone into her life to a point where he would have the ability to destroy her whole world, if it ever comes to that. Angie likes control, well let’s be honest, who doesn’t. But then again, Angie’s need for control makes it almost impossible for her to see the damage she is doing to her own life, the relationships she forges with everyone around her, and her inability to connect with people long enough to forge meaningful relationships with them.

And then there is Maddocks. Whose own life has clearly not been a walk in the park. The case which forces him to return to his old haunts brings back the memories of a failed marriage, his idealistic views on what his life should have been like, his frayed relationship with his daughter, and most of all, his tendency to be attracted to the broken that needs fixing, which explains Angie and his need for her in his life.

Like I said in my review of the first book, if it were any other man but Maddocks, he would have washed his hands off of Angie and walked away a long while back. But there are reasons which makes Maddocks stay, reasons which I as the reader see for myself when I keep wading through the complexity that is Angie. There is that damaged side to her character which is hard not to empathize with, and there is that wonderful person she could be if there wasn’t so much darkness clouding her life, a person that peeks through from within the layers every once in a while that makes Maddocks’ patience worth it.

Angie coming full circle with her past and uncovering the roots of her beginnings was something to behold. I enjoyed every single minute of it, rooted for Angie with every fiber of my being, and held my breathe every single time things started heading south. But life holds little meaning, if it ain’t for the struggles which you triumph through.

Recommended for fans of thrillers and suspense novels that keeps you at the edge, because a book that doesn’t make you sweat for the characters you root for, ain’t a book worth reading.

Final Verdict: The Lullaby Girl delves deeper into the psyche of Angie and brings to the forefront the horrors of sex-trafficking, taking on the world of transnational organized crime, delivering a story as informative & unsettling as they come.

People don’t understand the toll that job can take on a police officer or his family. They don’t know how we all have to tiptoe around the ugly side of the job, the mood swings, the depression, the drinking.

He caressed the line of her jaw with his thumb. And something fierce and angry erupted inside her—a desperation to burn down her own insecurities, to kill the pain, to blind herself to the fear of what her own memories might reveal, the realities that she might have to face about what had happened to her in childhood. She grabbed his tie and yanked him closer. Drawing his head down, she reached herself up and pressed her mouth hungrily to his. His lips were cold from outside. He hesitated a nanosecond before suddenly cupping her buttocks and jerking her hips tightly up against his pelvis. His mouth bore down on hers, forcing her lips open. He slid his tongue inside, met hers. Lust blinded Angie as she felt his erection stiffening against her belly.

His eyes, intense, held hers as he allowed her to pin his wrists above his head against the floor. Angie straddled his hips and slid the crotch of her skimpy panties aside. Widening her knees, parting her thighs, she sank down onto the hot, hard length of him. With a bliss-filled sigh she spread her thighs farther, making him go deep, deeper. And she began to rock her hips, creating friction deep inside the core of her body. Her breaths came fast, faster. She rocked harder. She became slick around his erection. Her body began to tingle. A hot, raw anger exploded, ripping through her gut, driving her wilder. She closed her eyes, put her head back, mouth open wide, panting, her skin going damp. And she rode him hard and fast and half-clothed, forcing her mind back, mentally reliving that very first night she’d spent with him at the Foxy Motel. She gasped suddenly, froze, then cried out as muscle contractions slammed through her in rolling waves, taking control of her body.