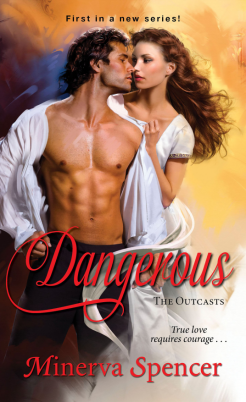 Dangerous by Minerva Spencer is her debut novel, the first book in The Outcasts series. I read the second book Barbarous first, right after which, I just HAD to get myself a copy of Dangerous to indulge in. And indulge I did, in one of the finest historical romances that I have read this year!

The Duke of Carlisle is desperate in his bid to get his daughter Euphemia Marlington (Mia) married off to avoid further scandal to their family. Mia’s return home had not been the joyous affair most would think would happen when one’s daughter, who was captured by corsairs, and then later taken into the harem of the Sultan for a long time, for whom she had borne a son has returned home after so many years. Now 33 years old, Mia has only one goal in mind. The sooner she is married, the sooner she can return to her son Jibril, something she keeps secret from even her father and own brother.

It is the Duke’s desperation that drives him to extend an invitation to Adam de Courtney, the Marquess of Exley, to a dinner and ball at the Duke’s residence, for the sole purpose of finding Mia a suitable husband. Adam’s two past marriages leaving him a widower had earned him the nickname The Murdering Marquess, and Adam’s reclusive nature from society is what sets the gossip mill stirring, what makes society want to avoid him in return. However, Adam’s interest in details surrounding the return of Mia is piqued enough to turn up, and to his surprise finds himself beguiled by a woman who he did not think would possess such a charm.

Against his better judgement, Adam proposes marriage, and Mia accepts, at first because she believes Adam would be the person who would unknowingly help her further her goals in getting back to her son. Adam’s condition is that she give him an heir, something he had failed at when it came to his past two marriages.

So begins the charming and sensual tale of two people who are drawn to each other in spite of themselves. Mia with her secrets that she hugs close to her, and Adam keeping the scars left behind from his first marriage that had practically ruined him for anyone else. But Mia seduces more than his body, she takes everything he has to give, and Adam finds that he cannot quite get enough of his newly wedded wife

As their relationship progresses, Mia too finds herself drawn towards the enigmatic man she married. A man who tries to put up a cold front, but shows how fiery and deep his passions run when it comes to her. If it had been just Mia alone, she would have been content to stay with Adam and forget the very reason upon which she had based her decision to take Adam as her husband. But when her past comes calling and gives her a very brutal wake up call, Mia must do everything in her power to leave the man she loves behind in order to bring her son back to safety.

I must say that I enjoyed Dangerous far more than I did Barbarous. I loved the intensity of emotions between Mia and Adam. Mia is someone who is passionate by nature, society’s worst nightmare perhaps, because she is someone who speaks her mind. Her captivity at the Sultan’s palace had also meant that she is far more experienced in the arts of sexual pleasure, something that Adam does not begrudge her for and enjoys. Mia is a refreshing character in many ways. I loved her because she is feisty, independent, and is not afraid to speak her mind. All of that and more endeared her to me in ways I cannot explain. Her love for Adam is one that runs deep, a love that is pure on many levels, because he is the first man to move her enough  to give her heart to.

To fall in love with Adam is so easy. He might show the uncaring facade, put up his daughters at his country estate and plan never to bring them into society, and after all, his past two wives ending up dead does earn him the sort of notoriety that is hard to shake off. But deep inside Adam is a man of immense passion, integrity, and honesty, a man who wants to do right by those whom he love and is responsible for. His skills with swords is one that was hot – I cannot explain why, you would just have to read the story to find out.

I loved the ending. It gave glimpses into the lives of Mia and Adam and their happiy ever after that I could have gone on reading more about. But I am hoping that Jibril is going to end up getting his own story somewhere down the line, and that readers like myself who fell in love with Adam and Mia would get to see the couple in action then as well. I would be remiss if I were not to mention how much I enjoyed Adam and Martin’s relationship that developed towards the latter part of the story. I think I read somewhere that it is going to be Martin’s story up next. Can’t wait!

Recommended, because Minerva writes with a style and wit that draws you in, and does scenes of passion so beautifully well that you cannot help but feel the heat.

Final Verdict: Captivating from start to finish, Minerva’s scrumptious debut novel demands the reader to pick up the next in the series right after! Highly recommended.

He went only as deep as his aching head before stopping. A bead of sweat broke from his temple and trickled down his jaw as he stared down into her slitted green eyes. His control strained at its tether like a rabid dog on a leash. Once he began moving, there would be no finesse.
She smiled lazily, tilted her hips, and took him inside her.
“Ah, God.” The words burst from him like a plea for mercy.
Any vestige of control disappeared, and his best intentions with it. He used her with a savagery he knew would shame him later but he was beyond caring.

His vision went black and his body exploded. He crushed her hips in a punishing grip and held her still as he filled her and claimed her.
Mine.
He exhaled raggedly and rolled over, not wanting to crush her. Her legs tangled with his and she turned with him, a girlish giggle breaking from her when they tumbled onto their sides, still connected at the hips, their faces inches from each other.
Adam looked into her flushed, joyous face and his heart beat a deafening tattoo in his ears.

He came into her slowly and both of them made low sounds of satisfaction as he filled her. “My God, you feel good,” he whispered, his cheek pressed against hers, his breath hot on her ear. “I need to take you.”
She answered by tilting her hips to take him even deeper and then squeezing the length of him until he moaned.
“That was very naughty,” he gasped, drawing almost all the way out of her and then stroking into her hard and fast. The power of his thrust drove her up the bed and he rode her so hard she barely had the breath to cry out when the first climax overtook her.

As her flush deepened one small hand crept between her thighs and found the place that gave her so much pleasure. Adam didn’t think he’d ever been harder in his entire life as he watched her work herself while riding him.
Her other hand moved to her breast and stroked her erect nipples. Her back arched and her eyes closed and that was enough. He grabbed her hips and drove himself home.
She fixed him with an unfocused gaze as he pounded into her. “Come with me, Adam.”
Her words were the last straw and he convulsed against her with the sheer force of his orgasm, yelling out God-knows-what as he spent himself.

“You’ve reached the end of the road,” he said, backing her up against the ornately carved wood. She bent close, rather than trying to get away, flicking her tongue over one of his nipples.
“Witch,” he hissed, his eyes closing.
Her skilled tongue worked his nipples, alternating painful little nips with soothing sucking while his erection pulsed between them.
“You are so beautiful,” she murmured, her sharp teeth catching him and pulling, the pain exquisite. “Ever since the day you kissed me at my father’s house, I become wet whenever I think of making love to you.”

She laid her hands against his chest, looking up at him in a way that did disconcerting things to his stomach. “Will you bathe with me, my lord?”
He released into his gaze all the hunger and lust he had been controlling since their truncated lovemaking earlier in the day. Her face flushed and her lids lowered as he pushed against her, forcing her to take a step back, and then another as he relentlessly advanced on her, not stopping until he’d pinned her against the hard stone wall of the bathing chamber.
“Unbutton me,” he told her, his voice harsh with need. Her deft hands worked fast to free him.
He pulled up the skirt of her traveling costume, his hand moving to what he knew would be waiting for him. She wore no drawers. He shook with desire as he delved into her curls and found the part of her that transformed her into something that was his alone.

While she was still shuddering with pleasure he grasped her bottom, lifted her against the wall, and slid into her, holding very still once he was seated. He braced himself, his feet spread shoulder-width apart, gaining control of himself. She moved restlessly above him, her hips grinding, wanting more.
He pulled back to look at her. Her eyes were hooded, her mouth slack and willful.
“So greedy.” He snuggled her tighter to his body as he worked himself deeper. “You’ve hardly finished one orgasm and you already want another. You’ll not come again until you’ve earned it,” he whispered, punctuating his words with a quick thrust of his hips.

“Turn around and put your hands on the wall.”
She complied without speaking. He trapped her hands with his and pulled her arms taut, roughly shoving apart her legs before stepping between her thighs. He entered her with a thrust so violent he lifted her off her feet. She moaned and pushed back against him and the last vestiges of his sanity burned away.
“You will never leave me again,” he gritted the words into the back of her fiery head as he filled her. “Do you hear me?” He slammed into her. “You are mine,” he said from between jaws clenched so hard it hurt. She arched against him in answer.

“Unbutton me, Mia.” His voice was husky against her taut bud.
She opened his breeches and grabbed him. Colorful blasts exploded behind his eyelids and rendered him speechless as she took him into her body in one long, hard slide.
He held her hips loosely as she rode him, looking down to where their bodies were joined. She knew what he wanted and pulled all the way off him before lowering herself, allowing him the breathtaking view of his shaft disappearing into her body. He thrust with all his might and she cried out, her hands gripping his shoulders while she convulsed around him.
His orgasm left him blind and he shuddered and pulled her against his heaving chest, stilling her body while his heart pounded so hard he thought it might explode.