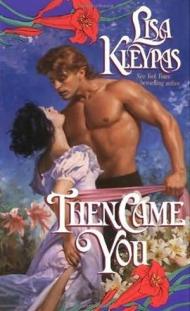 My first book from Lisa Kleypas was the second and last book in the Gamblers Series where I fell in love with Lisa Kleypas’ style of writing and her vivid characters that are quite different from most of the characters portrayed in historical romances. Even when I was reading book 2 of the series i.e. Dreaming of You (let me take a breather here to remember Derek Craven *sighs*), I was curious to read the story of Alex and Lily who play minor secondary roles in the story. So here I go!!

Lily Lawson, portrayed as a woman who can live up to anything in a man’s world (she hunts as good as any lord/marquess or whatever & gambles  better than most men) and basically gets away with being notorious because she is such a daredevil. But behind this facade lies endless heartache and pain. Betrayed by the man she was betrothed to at the altar, fleeing to Italy with her eccentric aunt to Italy, finding a man who Lily thinks is the one and surrendering to one night’s passion which is not so passionate for her in the end leaving her pregnant. No one back in England except Derek Craving who secretly yearns for Lily but wants better things for her than he could ever be and shares as close relationship with a woman as he ever would, knows that Lily had Nicole out of wedlock and that her child at the age of 2 years was kidnapped by her father who fled to London with Nicole upon facing various criminal charges. Lily who is left off with a comfortable inheritance by her aunt, spends most of it trying to get her daughter back from her father by paying him off in huge lump sums until finally she is left destitute.

Enter Alex, Lord Raiford’s world. Grieving for his American fiance who had died in a tragic hunting accident and betrothed to Penelope Lawson, Lily’s younger sister for all the wrong reasons  that she would never make him vulnerable enough to hurt him like the death of his previous fiance did portrays Alex as a deeply private man who is immensely wealthy.

The story that unfolds is at times hilarious and heart wrenching too. Penelope who is in love with Zachary, who has a lesser title to present than Alex, desperately seeks the help of Lily to prevent Alex and Penelope from getting married. Lily intervenes, turns Alex’s world upside down, and eventually detains Alex long enough at her home by tying him down to her bed to allow Zachary and Penelope to elope together. Alex who had been keeping the feelings that Lily evokes in him in check, lets them loose and hunts Lily down, wagers 5000 pounds for one night with her and wins Lily over.

Taming Lily who has never wanted to bow to a man and let him lead her life ever before finds herself enchanted when instead of offering her to be Alex’s mistress as she thought he would, finds herself married to him. Lily afraid that the news of illegitimate daughter would drive Alex and his love away keeps it a secret from him until he finds his wife and her daughter’s notorious father in a supposedly compromising position which finally propels Lily to spill the beans.

Though I didn’t love this story as much as I did Derek’s story, this one still had its moments of passion, laughter and love all packed into one.