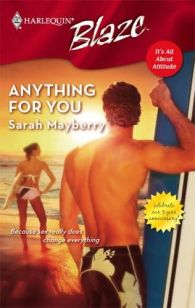 This is my all time favorite book from Ms. Mayberry and this is my first read as well as the book that got me hooked onto Ms. Mayberry’s style. After reading through all sorts of books by Ms. Mayberry this past week, I just couldn’t help myself but revisit the story of Sam and Delaney which the author has done a really splendid job of creating. Of course it helped a lot since Sam and Delaney are both best of friends who have known each other since childhood. And that history combined with the explosive, combustive chemistry between the two makes this story a memorable one long after you have finished reading the book.

Like I said, Sam and Delaney are best of friends. They grew up together and have their own business together, publishing an extreme sports magazine for the past 8 years. And for 16 years of her life Delaney has been in love with her best friend. But Delaney gets her wake up call that her life is wasting by whilst she moons over Sam and her unrequited love, when she goes off for vacation and spends time with her sister Claire and her kids. Delaney wants it all, a husband and 2.5 kids to come home to at the end of the day. Knowing that while she is part of Sam’s life, no man would even come close to being special enough for her to get married to, Delaney makes plans to effectively remove herself from Sam’s life.

Sam feels like his whole world has turned upside down when Delaney tells him that she wants out of the business. And to top it all, Delaney has had a makeover which is making Sam notice all sorts of sexy things about Delaney which makes him feel ashamed of the fact. Explosive passion that bursts between the two leaves Sam feeling more out of sorts even though he can’t help but want Delaney more than he had ever wanted any woman in his life.

Delaney knows that Sam doesn’t do commitment. Having had to deal with a set of parents who used their kid to wrangle all sorts of bitter arguments when Sam was growing up, Sam doesn’t believe that any relationship could work or was worth working for. His only steady relationship in his life had always been Delaney and that fact alone makes him want to bury his head in the sand rather than face the fact that he was finding Delaney irresistible.

Its a passion filled ride for these two willful characters that Ms. Mayberry has created and I for one loved each and every bit of their story. Most probably would end up re-reading this book again somewhere down the line. For now the satisfaction of the happy ending in this book is enough of a glow for me to last this night through!