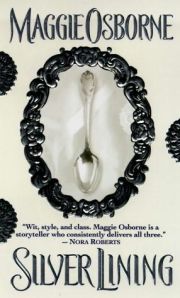 I have to say its been a while since I read a romance that truly touched my heart. This book is that and so much more. I have always loved romances where the characters slowly find themselves falling in love with another by identifying qualities within one another deserving of their love and devotion to the other. This novel by Maggie Osborne offers all that and more in the story of how Louise Downe nicknamed Low Down for the luck she had had in life finds herself hitched to the blue eyed Max McCord who is in love with his fiance back home.

Max becomes honor bound to marry Louise when she nurses him and all the other men who were in Piney Creek to hunt for gold from smallpox taking all their lives. The men promise amongst themselves that Low Down would have anything that her heart desires for not turning her back on them in their hour of need. To their discomfiture and surprise, Low Down announces that her heart’s desire is to have a baby of her own to love and cherish. For someone who has never had a family of her own it has always been Low Down’s dream to one day have a loving a family of her own.

Its not surprising that none of the men present are too keen on the idea of bedding the bedraggled creature standing in front of them. Although Low Down has on her mind to just get the act over and done with which would plant the baby inside her, the priest present convinces the man who draws the marble with the scratched cross on it to marry Low Down. Though Low Down has got plenty to say against being united in marriage to a man, her protests go unheeded as the men are determined to do right by her.

Max McCord has never shied from responsibility in his life and he isn’t about to start now. Though his angelic bride-to-be Philadelphia is waiting for him back home and their marriage is to  take place within two weeks time, Max doesn’t want to be labeled as the guy who turned his back on repaying a debt he owed. And he can’t believe his bad luck when he is the one who ends up getting hitched to Low Down, when the mere thought of bedding her sends shivers up and down his spine.

Though neither Low Down nor Max wants to be married to one another they have no choice but to go on ahead with the marriage as Max takes his responsibilities to head and Low Down really wants that baby badly. Coming to an arrangement that they would stay married till Low Down became pregnant with a child, these two set off to make a temporary life for themselves in Max’s hometown where Max has to face the music of facing his jilted fiance and her all powerful father.

Max cannot believe his ears when Philadelphia professes to be pregnant with his child, and Wally Max’s brother has to step up and marry Philadelphia to save both families from being ruined by scandal. The story that ensues is one that would stay with me for a long time to come. How Low Down is slowly transformed into Louise Downe, a woman who doesn’t fully understand her self worth, a woman who hopelessly falls in love with her husband against her will and who slowly steals the hearts of all those that surround her.

Very highly recommended as a book that cannot be put down easily once started.