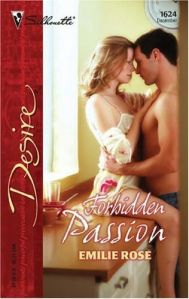 Ever since I read the book Condition of Marriage by Emilie Rose and went through the list of published books by the author I have wanted to get my hands on this book as the synopsis seemed to hint at an intriguing story. And of course the raving reviews this book has received on numerous bookseller websites didn’t help. I have been scouting all over the Internet to find whether an e-version of the book had been released for quite sometime now. And to my delightful surprise last night I found that the book has been released on Kindle in April this year. (Woohoo!)

Lynn has been married to Sawyer’s adopted brother Brett for the past four years. A time during which Lynn has learnt that love is not what it seems to be and that a person could really whittle away and breakdown from the constant emotional roller coaster her marriage to Brett was. Lynn and Sawyer end up having mind blowing sex mere hours after Brett’s funeral, an act that puts Lynn in a bit of a predicament as she and Brett had tried to make their marriage work for one final time and started trying for a family just before Brett was killed.

Sawyer and Lynn has a shared history together, and Sawyer has no idea what kind of a monster Brett really was. Believing Brett to be the younger brother Sawyer had always worked his butt off to provide for and never understanding the reason why Lynn never waited for him and got married to Brett instead, Sawyer proposes marrying Lynn when he finds out that she is pregnant even though Lynn has no idea who the father could be.

Lynn never thought that a man could be understanding, loving, kind and attentive towards her needs and wants. Marriage to Sawyer opens up all the possibilities that were closed off to her before and it is not long before Lynn falls for Sawyer all over once again all the while thinking that all Sawyer wants is the temporary arrangement they agreed to before they got married.

Skillfully seductive, this book is a good read for a quick bout of romance with characters that you can relate to. Wish the story could have been longer!