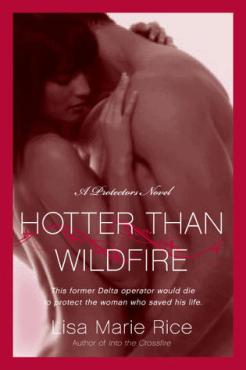 Book 2 in the Protector series didn’t wow me as much as its predecessor did. But nevertheless Lisa Marie Rice still managed to hold my undivided attention as I delved into the story of Harry Bolt, someone who has a very painful past from which he still has recurring nightmares.

34 year old Harry is one of the 3 “blood” brothers that own RBK Security. Having served in the army and with enough scars to last for a lifetime, Harry’s savior comes in the form of the sweet and sultry voice of the mystery singer only known as Eve. By a twist of fate it is Ellen Palmer i.e. Eve herself  who makes her way to seek the services of RBK Security who specializes in helping out beaten and battered up women fleeing for their lives with nowhere else to turn to.

For someone who believes that nothing in this world could surprise him anymore, that is exactly what Harry feels when he discovers that the scared red haired beauty in front of him who has awoken his dormant libido after two years is none other than the goddess whose voice it had been that had led him out of the shit hole his life had been in back then.

Once Harry claims Eve as his, there is no turning back for either of them as heady passion stronger than anything describable takes hold of them delivering sensuous scenes of love that is trademark Lisa Marie Rice.

As with most of her stories, the bad guys are vicious in their intent and actions and nothing short of Eve’s death would stop them. As the bad guys pull all the stops to find out where Eve is in hiding, Eve finds herself in a cocoon of love, warmth and friendship which she fears would shatter if she stays around too long. Its touch and go during the last showdown with the bad guys and once again Mike, Sam and Harry work together to save the one woman who lights up Harry in more ways than one.

As I said earlier, though I didn’t love this one as much as I did Sam and Nicole’s story, nevertheless I still loved Harry as a hero. Strong and uber protective, Harry is enough to melt any woman on the inside because of his caring nature. And I loved seeing glimpses of Sam and Nicole in this one and of course the two very beautiful epilogues at the end of the second one which takes place a year later hopefully signals the beginning of Mike’s story.

As some readers have pointed out, I too have problems with how Ms. Rice tends to go a tad overboard with her descriptions making it a bit tiresome to tread through the repetitive material to find the actual story beneath it. But, being a huge fan of Ms. Rice, I’m willing to look beyond that into the story and would rate this as a great read worth your time if you love Lisa Marie Rice or if you love romantic suspense with an all-out alpha who would literally make you swoon as you get to know him. And I have to warn you, this one’s got a pretty powerful prologue to it that may just require you keep a wad of tissues handy.