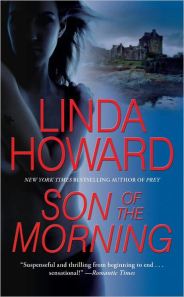 This is one of the books that I skipped when I went through my initial Linda Howard reading phase around 2 to 3 years back. This story is a mix of contemporary romance, mystery and suspense together with the aspect of time traveling thrown into the mix.

Grace St. John is a scholar specializing in ancient manuscripts. Grace is happily married to her husband Ford an archaeologist and living together with her brother Bryant who himself shares the same profession as her husband. The most recent stack of documents that land in Grace’s hands has her running for her life before the night is through. Witnessing the murder of her husband and brother within seconds of the other, Grace knows that her boss Parrish would stop at nothing to get his hands on her and the papers.

Overnight the scholarly Grace has to learn to keep her wits about her and transform herself into a person she barely recognizes. Grace doesn’t want to give into the gut wrenching pain that is barely kept at bay and it is the vow of vengeance and revenge on Parrish that keeps her going. Grace knows that the answer to everything lies in the bundle of papers that she had blessedly enough had the mind to take away with her and so starts her quest for answers whilst being a part of the underground community.

Before long, she is dreaming of the larger than life Scot warrior described in the papers known as the Black Niall of Scotland entrusted with guarding the lost Celtic treasure which is fabled to  hold unlimited power. Her shared dreams with Niall border on the verge of reality and Grace fears that she is being unfaithful to her dead husband Ford as the nights shared with Niall is the only time she feels alive.

Back in 13th century, Niall has his own share of problems always fighting and slaying those who dare to encroach on his territory. And the vague sense of a woman watching him from time to time and his unbearable hunger to claim her is keeping Niall on edge, more so than usual.

Once Grace discovers why Parrish and his Foundation of Evil wants their hands on the papers which holds the location of the elusive treasure, Grace knows that she alone cannot fight Parrish and finish off the foundation. To do what she must, Grace follows steps noted down in the papers on how to travel through time and finds herself in the midst of a battle and within seconds she is captured along with Niall.

Thus begins a journey of discovery of love that knows not the bounds of time, a man who would die protecting what is his and a woman who would travel to the beginning of time itself to belong to her warrior whose searing touch is unlike any she has known.

I kind of had mixed feelings about the novel whilst reading. A large chunk of the book passes by without Niall and Grace setting eyes on each other. Their only form of communication though both of them have no clue is through their vivid dreams of one another. Niall is a man to contend with whose presence makes the story come alive. Mind you, Grace is no whimpering heroine herself. What she accomplishes within a short period of time after the death of those whom she loves, I was in awe of her and was rooting for her all the way through.

Fans of Linda Howard ought to try this one out. Cos this surely is quite different from her usual stories.