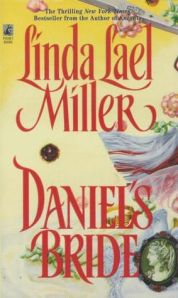 I have been following and reading up stories on the theme where heroes were previously married or dote on someone else apart from the heroine with whom the hero has to enter into a marriage mostly for conveniences sake. Daniel’s Bride is one such novel, one when I started reading I had the inkling that I had previously read it and halfway through I knew with certainty it was so.

Jolie is about to be hanged for a crime which she didn’t commit when Daniel saves her from her fate by agreeing to marry her then and there. Jolie realizes that she would rather get married to a total stranger than die and pay for a crime she never even knew was happening until it was a trifle bit too late. Daniel marries her and whisks her off to his farm where Jolie discovers that her brand new husband is a man who has vowed never to love again.

Daniel has been grieving for his dead wife and two children, one who had died without even being born into the world. Daniel knows that he needs children to continue the family line and it was with this practicality in mind that he saved beautiful Jolie, who unnervingly had the power to skim right through his thoughts no matter how hard he tries.

Its a hard life for men and women back in the 1800’s and when you read through the book, you find yourself in awe of those who have lived under such hardships in the past. The preparation of a simple meal back then took hours and though the description makes one think Jolie embraces the hard life effortlessly, I felt twinges in my back from just reading about the backbreaking work she does on a daily basis.

Right from the start Jolie is drawn to the quiet enigmatic man that Daniel is. A man of few words, Daniel introduces her to the wonders of sensuality and before long she is in love with Daniel. Daniel doesn’t like the fact that he continues to be enchanted with his wife and decides to send her along to San Fransisco so that she may start a new life as a divorcee once the harvesting period is over.

But the best laid plans have a way of getting over one’s head as two children who have no where else to turn to end up living with Daniel and Jolie. Little by little, the rigid structure Daniel has built around his heart starts to crumble, but it is a battle that is hard won for Jolie. And to make matters worse, the outlaws who actually committed the crime for which Jolie was prosecuted for starts turning up around the farm when Daniel is not around, keeping Jolie at a loss as to how to get rid of them before they destroy the family that she has found for herself and holds so dear.

This story is one that moves slowly, like a cup of hot tea warms your insides on a cold day. Sometimes I got frustrated with Daniel because he rarely shows how he feels towards Jolie and the ending of the book too seemed a bit empty to me because maybe I was wishing that Daniel would profess his undying love to the woman who would walk to the ends of the earth for him. But anyhow, its a good story which makes me more appreciative of all those gadgets that eases the hardships that we too might have had to face if it weren’t for their invention.