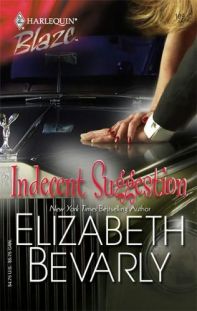 Indecent Suggestion is a book that I have been eying ever since I discovered my love for the theme where best of friends turn into lovers. So finally when the e-format was published I managed to get myself a copy and sink into the story that I had been waiting for so long.

Turner and Becca have been friends since childhood and they had managed to stay together and go so far as to work for the same company and work as a team to land advertising projects for their company. One vice of theirs ever since they became teenagers had been their desire for smoking. The opening chapter of the book had me wondering whether the hero and heroine were already going at it even at the start of the book, but I later realized that the chapter was all about their mutual craving for a cigarette.

Thus, it is this mutual craving that they cannot seem to let go of that lands Becca and Turner at a hypnotherapists place upon Turner losing a bet that he could go without lighting a cigarette for 24 hours; a bet Turner loses at the last minute because he doesn’t want to give into the intense craving he has had for his best friend ever since they were teenagers, a fact that he had become adapt at hiding from Becca all too well.

The hypnotherapist, thinking that Becca and Turner are the married couple who have been having problems consummating their marriage puts them under and suggests to them a codeword when heard would drive the couple into a frenzy to have uninhibited sex with one another.

Though Becca and Turner had at moments in time succumbed to light petting sessions back in college and one night after an office Christmas party, Becca had always halted things before they got out of hand, out of the fear that sex would drastically alter their friendship and inevitably destroy what they had between one another.

So it takes Becca completely by surprise when she suddenly starts having cravings to get horizontal with Turner at the oddest moments. Though Turner cannot believe his good fortune when Becca comes onto him at the most inconvenient times imaginable, Turner resists giving into what his body has been clamoring for all his life.

But with like a fire set ablaze, this one burns out of control and its not long before Becca and Turner are having the time of their lives burning up the sheets. And throughout the weeks that follow, Becca comes to realize that it had been foolish of her to have kept Turner at bay for so long and she comes to realize that she might actually be in love with Turner and may have been in love with Turner all this time.

But things turn a bit confusing for Becca and Turner when they realize what the hypnotherapy session has really accomplished and it is up to Becca to convince Turner that what she feels for him is as real as the sun that rises from the East every day and that her love for him would continue to thrive for as long as they live.

I found it tedious at times to read through the numerous detailed sex scenes in the story cos I felt that the character development did not really take place along with the intense love scenes described very well by the author. If the character development had been done a bit more, I would have loved this story and it most probably would have ended up in my re-read pile.