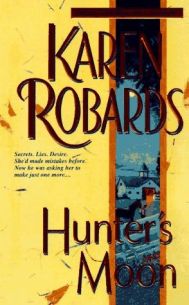 Hunter’s Moon was the first book ever that I read from Karen Robards which made me ultimately fall in love with her stories and writing style. Though certain titles from Ms. Robards leaves a lot to be desired, most of her stories continue to enchant me and leave me wishing that there were more authors like Ms. Robards out there.

Hunter’s Moon starts off during the year 1982, when 12 year old Libby Coleman disappears on the night of 15th November never to be seen again. The story then continues 13 years later with Will Lyman from the FBI from Chicago who had worked on big time cases is assigned to chase the pettiest criminals he had the misfortune to come across in his career over in Kentucky. City born and bred, Will felt suffocated with the fresh air that he had to breathe in. Will knew that he landed with the assignment because his boss Dave Hallum was pissed off at him him for the fact that the criminals that he had been chasing on a case had blown up his cabin cruiser. For that alone, he had landed in Kentucky with John Murphy as his partner, who is as laid back as they come. Will who was naturally a quick talking, quick thinking and quick acting kind of guy found himself gritting his teeth with Murphy’s attitude. Will who was 39 years old, has an 18 year old son Kevin, and had been married to Kevin’s mother Debbie who had been killed in car accident two days after their son had turned 3 years old.

Will had been assigned to find out what was happening in the horse racetracks in Kentucky where Senator Paxton who bets on race horses suspected that something fishy was going on when his usual bets had turned up losses recently. Senator Paxton had asked his friend and Hallum’s boss to investigate and in turn the assignment had landed in Will’s hands. Will had found out that in fact, Senator Paxton’s suspicions were true and was laying down a trap to lure in Dan Simpson, the horse trainer of the Wayland farm, one of those suspected in substituting the actual racehorse with others and betting on them to draw in huge amounts of money. A burlap feed bag with 5000 dollars in cash had been placed inside the barn and Will and Murphy were monitoring what was going on when a woman whom neither Will nor Murphy has any clue who she is, finds the bag of cash and leaves with it.

Molly Ballard had quit her job at the Wayland Farm four days ago in a fit of fiery temper when Thorton Wayland, the obnoxious grandson of the stable owner had grabbed her butt. Molly knew that her family could not afford the loss of her job and she was determined that Dan Simpson, her boss would pay her the two week’s pay that he owed her. Knowing Dan and his ego, Molly knew that he might refuse to pay what he owed her. Thus Molly had come in earlier than usual before Dan came in so that she would have no chance of missing him. It is inside the barn that Molly finds the bag of cash and without thinking takes it and goes home.

When Molly realized what she had done, the recriminations of her actions had slowly started to sink in. If she were to go to jail or if someone were to kill her for the money, Molly knows that there would be no one else to look out for her 4 younger siblings. Molly had been a baby when her father had walked out on them. Her mother being a manic depressive had born 4 more kids, each for a different man. Ashely who was 17, Mike 14 and Sam and Susan who were twins were 12 years old. With an unreliable mother, Molly and her siblings had all spent their early childhood in various foster homes until Molly had turned 18. Together with her mother, Molly had brought her siblings home and things had been good for a while until her mother had committed suicide in her newest boyfriend’s apartment. It was Molly who had found her with her slashed wrists and blood everywhere. Molly had never notified the authorities of the fact that her siblings were living with her and thus looked after the 4 of them and she wouldn’t have it any other way even though money was always tight and they barely got by.

When Will shows up on her doorstep, Molly fears that everything in her life is about to come crashing down. Mortified more than anything that she had indeed stolen the money and with Will having videotaped evidence of the fact, she is more than relieved when Will believes her version of what happened. But when the informant that Will and Murphy had been relying upon commits suicide, Will needs to work out another plan to make his case work. Thus Will approaches Molly again, this time offering her the 5000 dollars if she would help him nab those he was after. With Will holding all the cards, Molly knows that she has no choice but to do as Will has asked and she agrees to pose as Will’s girlfriend for the duration of the assignment.

Unwittingly, Will who has always maintained perfect control on his emotions and had never mixed his professional life with his personal one suddenly finds himself yearning to do just that with the delectable Molly. At first, Will had felt sorry for the hand life had dealt Molly and her family, but then the stirrings of attraction and awareness begins unlike any he has ever felt before. Will knows he is too old for a 24 year old woman who looks like a teenager at the best of times. Molly who has never had a lack of male companions and had always had the upper hand with the men she dated finds herself out of her depth with the intense emotions she feels for Will. Molly knows that if she is not careful, she would end up falling for a man who would leave them all when the case was over. Nevertheless, the careful control Will yields on his emotions breaks apart and both Molly and Will decide to give in to what they feel for each other.

When Molly falls in love with Will though she tries so hard to deny it and walk away from it, in the end it is Will who walks away when unknowingly Molly stumbles upon the evidence that supports Will’s case. After a final showdown in which both Will and Molly say things that they regret to each other, Will goes back to Chicago and life continues though the pain Molly feels is unlike anything she has ever known. And then 3 weeks later, on the 15th of November, tragedy strikes when a bunch of violent horse mutilations on various nights throughout October culminate in Susan being kidnapped whilst in bed asleep and it is this turn of events that brings Will running back to Molly. Will has to face the fact that what he feels for Molly and her package deal is the forever kind of emotions before its too late for all of them as the maniac killer who had laid dormant for the past 13 years is back with a vengeance and in a frenzy to kill.

Will is an intense hero who makes me melt all over and Molly and her family bring a heartwarming glow to this wonderful romantic suspense novel. The witty banter between Will and Molly always brought a smile to my face and the intense attraction that simmers between the two is always something to be savored. My favorite scene from the book is when Will loses his legendary control with Molly because he is so infuriated with her and they have sex on top of his car, right before he walks out of Molly’s life. That scene was HOT!