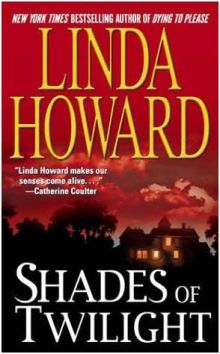 As Catherine Coulter says on the cover of the book, Linda Howard is definitely an author who makes all our senses come alive with her cleverly spun romances. All my senses were on red alert from the start till I read the very last line of the book. No author does alpha heroes better than Linda Howard and that my fellow readers, is a fact.

Shades of Twilight is a story that is focused on  the Southern, rich and generations old Davenports family. The story kicks off when Roanna Davenport is just a mere 7 years old, Jessamine (Jessie) 13 years old and Webb Tallant 7 years older than Roanna who are all 1st or 2nd cousins. Roanna’s parents along with Aunt Janet who had been Jessie’s mother are killed in a car crash rendering their grandmother, the strong head of the household Lucinda mourning the loss of two of her children in one day. The Davenports resided in a mansion like house called as  the Davencourt, which Lucinda ruled and managed over. Though Webb is not a Davenport, he comes from Lucinda’s side of the family and she loves him and sees the strength in him that would make him the best choice to lead Davencourt in the years to come.

Whilst grandma Lucinda adored the beautiful Jessie where Roanna never did learn how to be graceful and always had a way of finding trouble where ever it may be, Roanna was afraid for the most part that the death of her parents would mean that she would be sent away. But in the end, grandma Lucinda overrides the discussion by stating that both Jessie and Roanna would live at the Davencourt. Even from that very tender age, Roanna hero worships Webb and the ground he walks on. Webb always had time for her, played with her and in general made her feel better than anyone else in the family.

But Roanna knows that as destiny has decided, Webb would take control of the Davencourt and from the way his eyes possessively roamed over Jessie, he would claim her as well. Spoiled to the core and illegitimate, Jessie had always resented Roanna for the fact that Webb always seemed to stand up for her and protect Roanna from Jessie’s bullying. The only place where Roanna feels any comfort is with the horses that the Davenports breed and there she blossoms and blooms like a flower starving for sunlight.

When Roanna turned 15, Webb and Jessie had married leaving Roanna heartbroken. Two years pass by and everyone at Davencourt knows that the marriage is far from a happy one. With Webb thrust into the cutthroat world of business whilst at the same time attaining his masters, he had little time for the tantrums that seemed to be a daily part of Jessie’s life upon her discovery that she is not able to control Webb like she does with other people who surround her life. And when she starts her illicit little affair with her own birth father, Jessie can barely keep her glee to herself. Meeting her father at hours for a time during the day, it is on one such day that Roanna follows Jessie and comes upon Jessie and her mystery lover whilst going at it like a bunch of animals. Angered beyond belief and hurt on behalf of Webb, Roanna makes her way home vowing never to tell Webb what she had witnessed.

That night, things take a turn when Webb who always badgers Roanna about how little food she intakes, offers her comfort in his arms. An innocent embrace slowly spirals out of control when Webb who has never seen Roanna as anything else other than a sister finds himself fiercely aroused, and a kiss initiated by Roanna has both of them nearly out of control when Jessie walks in on them and starts shrieking the house down. Jessie eventually manipulates the turn of evens to make it sound as if Roanna had deliberately tried to set up the scene in the kitchen so that Jessie would walk in on them, and the loathing and anger that Roanna sees in Webb’s eyes breaks her heart to pieces.

The mother of all arguments that Webb and Jessie has that night ends when Webb walks out fed up of Jessie and their marriage. And it is Roanna who walks into their room later to find her murdered, with her head bashed in. The whole family is quick to blame Roanna who the police rule out from the very beginning. In the end, Webb is their number 1 suspect, though his airtight alibi doesn’t allow the police much room for conviction. That night, everything changes in their family. Webb who had always been the darling golden boy of the family comes under accusations and the one time he needs his family, except his mother and another aunt, all his family turn their backs on him. Roanna does try to offer him comfort, only to be rebuffed in front of everyone else, which finally shatters her completely. Finally, with the investigation over with, Webb walks out on the family, never looking back.

Ten years later, Lucinda begs Roanna to bring Webb back home. Lucinda needs to make her peace with Webb, and hand over the reins of the  business to him as cancer is slowly taking her over. The ten years had left its toll on Roanna  as well. Gone was the coltish, exuberant girl brimming with energy and mischief. In her place was a cool, remote young woman who never hurried, never lost her temper, seldom smiled and much less laughed out loud. n her mind, she had been worthless and unlovable as she had been when Webb had rejected her apology and the comfort she had offered at Jessie’s funeral. So she had destroyed herself and built a new person who doesn’t feel much, and goes through the daily routine of life like an automated machine. The act of convincing Webb to come back to Davencourt stirs the only emotion that she had felt in 10 long years and Roanna knows that she would never fall out of love with the man who had captured her heart so completely when she was a mere child.

Webb’s return to Davencourt is hardly met with applause from the rest of the family who sometime or the other have slowly moved into Davencourt and were leeching off Lucinda. It is upon his return that Webb learns just how close Roanna had come to losing her life and the thought that he would not have known about it leaves him weak with fear. A love that had unfurled as that of a love of a brother towards sister had changed into something else on that fateful night when all their lives had taken an unimaginable turn. And Webb was determined that he would make Roanna his, and prove to her that she belonged with him, as he surely belonged to her.

Amidst his return, the killer who had laid dormant all those years return with a vengeance, to finish off what was started that fateful night 10 years back. A novel that portrays the secrets and lies that a family holds and takes with them to their deathbeds, a story of intense love and passion that withstands  the test of time and distance, this story just took my breath away, even the second time round.