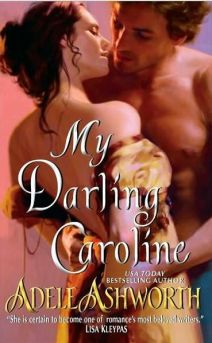 It’s been quite sometime since I enjoyed a historical romance as this one. Adele Ashworth is definitely one author I would keep an eye on from now onwards. This romance is so heartwarming that I just can’t help but smile deep within after finishing the story of Brent and Caroline.

Brent returns from serving for England as a secret service agent and fighting the war against Napoloean Bonaparte to find his cousin to whom he had handed over his estate and finances whilst he was gone had sold his most priced possessions. A man who has a way with breeding horses, Brent finds that its Caroline’s father who had purchased his most priced collection of horses.

Willing to strike a bargain to buy them back into his possession, Brent finds Caroline’s father wants to strike a deal to marry off his 3rd daughter Caroline, whom society has already labeled  to be a spinster with no good prospective offers for her hand in sight, which is fine with Caroline since her life and passion is devoted to being a botanist and breeding different varieties of roses.

Caroline an extra ordinarily gifted woman, wants nothing to do with men but to be left alone to pursue her dreams and her one passion in life. Wanting to go off to America to pursue her study of Botany, but never finding the right way to approach her father regarding the matter, Caroline finds in her marriage a way out, an annulment from a husband who made his intentions of not wanting a wife in the first place quite clear.

However, both Brent and Caroline never factored into their little plans that they would both become irresistibly drawn to one another and eventually fall in love with such spellbinding sweetness that as the reader I couldn’t help but be enchanted.

Brent is the type of hero that you come across rarely. With a bitter childhood, and a lonely past, he is handsome and utterly drool worthy in his pursuits in seducing his rather reluctant wife to stay by his side.

An old enemy from Brent’s past who wants to ruin everything that means something to him, a deaf child Brent fathered and the tidbits from both Brent and Caroline’s pasts are intrinsically woven together together to create a tale that you can’t really put down once you have started. Wonderful love story!