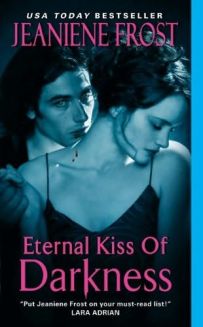 Jeaniene Frost has penned another winner with the second book in the Night Huntress World Books series. Before starting out on reading this book, I did skim through reviews written to get a feel on what to expect in this book. But I should have known even then that when it comes to Jeaniene Frost and her tales, you never know what to expect and each page just keeps you riveted with the surprises that come along your way. Needless to say I completely fell in love with Mencheres, I mean who wouldn’t? So here is my take on this wonderful story, which had me glued to every single word, right from the very beginning.

Mencheres whose the grandsire of Bones from the Night Huntress series, is a very old vampire. So old in fact he was born in 2553 B.C. and was a pharaoh when he became a vampire. Mencheres is one of the most powerful or should I say the most powerful vampire we have yet come across in the Night Huntress series. His power is such that he can move a lot of things simultaneously, fly at speeds that amazed me and could foresee the future before he assisted Bones in killing his wife Patra.

Marriage to Patra and the knowledge that he shared with her about the ways of the dark magic has continued to be one of the biggest regrets of his life. Patra’s thirst for power and worldly riches had ultimately ended in her demise, and Mencheres had been shouldering the blame for all the havoc and disaster that she brought about, nearly destroying everything and everyone that Mencheres had held dear to him.

Radje or Radjedef is an uncle of Mencheres, and a Law Guardian of the vampire race. Being a Law Guardian meant that he was a member of the vampire ruling council, and being the power hungry and corrupt vampire he was, Radje had been after Mencheres for eons, claiming that the power Mencheres’s sire had shared with him upon turning him into a vampire, rightfully belonged to Radje.

With the cease of his visions, Mencheres feels adrift, and knowing that the centuries old feud between him and Radje would just eventually hurt those who belonged to him, and the fact that he kept seeing total darkness whenever he tried to look into the future made Mencheres come to the decision that death was all that awaited him now. Mencheres knows that as the co-ruler of his line, Bones would be able to handle whatever that could come their way, and Mencheres was determined that a personal feud between him and Radje wouldn’t harm those that belonged to him. So it is with this in mind that Mencheres decides not to wait for the sure death and eternal darkness that awaits him, but rather commit the vampire form of suicide and embrace death before its too late.

Kira works as a private investigator and has two half siblings Tina who was terminally ill of whom she was really protective of and Rick, who was a drug addict, always trying to leech off money from Kira on the pretext of turning over a new leaf and getting his act together. Kira is well versed in the art of self defense, having trained to become a cop. Kira’s ex-husband had definitely left his mark on Kira with the physical and emotional abuse that he had heaped on Kira during their marriage. Kira’s salvation had come in the form of an old cop friend of her ex-husband, Mack Davis whose motto in life had been to save one life, an advice that always runs through Kira’s mind.

So when during her walk home from work Kira hears a man in agony, she can’t turn her back on whoever it was that was in so much pain. Mencheres had walked in on the ghouls who were effectively butchering him up in order to put his plan of getting killed/committing suicide into action, when a beautiful human woman walks in, commanding his torturers to give it up. To say the least, someone who had presumed to have seen everything life has to offer is more than surprised when a woman who doesn’t even know him, walks into the danger that surrounded him willing to give up her life. And when the ghouls attack the woman, Mencheres knows that he has to save the woman and stall his plans for now.

Knowing that the one thing that all Law Guardians held in contempt was flaunting the fact that vampires existed to the human race, Mencheres knows that all he has to do is erase Kira’s memory and send her on her way. But her fatal injuries end in Mencheres feeding her his blood, and right from the get go, Mencheres is unable to read Kira’s mind or effectively manipulate her with his green-eyed gaze. Thus Kira becomes a captive, a captive that Mencheres treats well, earning Kira’s respect amidst the other feelings that Mencheres’s deep black eyes and his perfect bronze body evokes in her.

Mencheres yearns for the beautiful courageous woman Kira is. Emotions that he had controlled ruthlessly and tamped down on for more than 900 years suddenly burst into the surface, urging him to let go and succumb to the feelings that Kira roused in him. Mencheres, a vampire who has always been coveted by others for what he could provide for them, whether it be from his wealth or his undeniable powers as a vampire, has never been really wanted for the man he is. And it is this cynical viewpoint that prevents Mencheres from laying a hand on Kira no matter how much he comes to desire her within the week that she resides at his home.

But the time comes for Mencheres to let Kira go, when he knows that he would never be able to manipulate Kira’s mind like he can for most of the human race, and when Kira’s sister Tina is hospitalized, Mencheres knows that the time has come to let her go. Kira thinks that Mencheres would help save her sister’s life only in exchange for her captivity to him for life, and she is more than surprised and a little lost when Mencheres releases her and sets her free. Though she is freed, Kira’s undeniable feelings for Mencheres makes her seek him out and it is then that Radje puts his evil plan into effect to draw out Mencheres to finally get the power that he wants.

In the end, Radje’s harsh sentence ends Kira’s life as she knows it and Mencheres changes her into a vampire, refusing to let the one woman who stirred his senses after centuries die away. Someone reviewed that there wasn’t enough heat between Mencheres and Kira and it was all about control with Mencheres. Maybe that particular reviewer and I didn’t read the same book, cos I definitely felt the heat and seductive lure of the power Mencheres yields so effectively to make Kira his. And I wouldn’t say when you have ceiling banging encounters with the woman you love, you are in control. Definitely not!

With Kira in his life, Mencheres suddenly yearns to live and doesn’t want his vision of eternal darkness to come true. And Mencheres knows that he has to pull all the stops and use every bit of knowledge and power he has to beat Radje at his game and save Kira from his clutches before its too late for either of them.

Mencheres definitely made me sigh all over and Kira is definitely the woman for him. I absolutely fell in love with Mencheres’s sleek good looks, the way he tamps down his power and cares for those around him and who belong to him. Its not that Mencheres is a vampire who hasn’t made mistakes or is one without flaws. But the fact that with absolute power in his hands, Mencheres still manages to be the man he is definitely makes him a vampire to sigh over!

Needless to say, the longest review I have ever written so far is due to the fact that I loved this story so much and wanted to capture its essence in my review. This book is definitely very highly recommended for Frost fans as well as those who have never read anything from Frost before. Try it out. It might just be your cup of tea! And for fans of the Night Huntress series, its always a treat to see our favorite couple Cat and Bones from another hero or heroines’ viewpoint. Always good to revisit them.

My only peeve with the book was its cover art. Definitely doesn’t match the Mencheres that I envision in my mind.