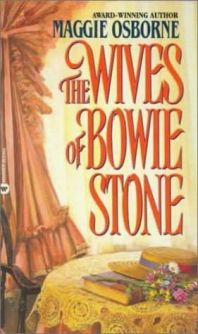 This book has been on my TBR pile for quite sometime now. It landed on my pile after I came across Sliver Lining by Ms. Osborne and fell in love with her writing style. So after finishing up my last book, I was mulling over which book to start with when I read through a thread on Amazon discussing Maggie Osborne and Pamela Morsi. Readers were discussing which of the books by the two authors they liked and I suddenly had the urge to go through the list of books I have by Ms. Osborne and indulge myself in a wonderful story created by one of the most talented writers in romance.

As soon as I started reading this book the first thing that struck me was the odd title. Then I realized that the hero in question must have more than one wife in this book and it was as I expected. Bowie Stone is an ex-cavalry officer, wrongly convicted for murder when he had only killed in self defense. Dishonorably discharged from the cavalry for going against his superior’s orders which had entailed that he lead his officers and shoot down defenseless women and children in an Indian village whilst their men were out hunting, Bowie Stone had resigned himself to the death that awaited him.

In Gulliver County, Kansas, there was an ordinance that stated that men who were sentenced to death would escape their fate if one of the women in the county chooses the convict as her husband. This was due to the scarcity of available men in the county after the war had started. Desperate times called for desperate measures and this is how Bowie Stone escapes his unjust punishment when Rosie Mulvehey picks him up as her husband.

Bowie cannot believe his eyes at first when he lays his eyes on the woman who stands in front of him who looked and acted more like a man than a woman, reeking to the high heavens of whiskey, smoking and cussing all the way. All that Rosie needs from a man is someone to work on her derelict farm to harvest the crop that would serve as the revenge she has been seeking on her stepfather ever since his untimely death.

Rosie doesn’t expect things to change much just because she has taken on a husband. Going into town, getting drunk and raising a ruckus bad enough to land her in jail is a weekly occurrence for Rosie. Rosie lived with John Hawkins an ex-Indian and Lodisha an ex-slave to whom she was loyal to a fault and vice versa. Rosie relied on the steady intake of whiskey at night to keep her nightmares at bay, the nightmares of the sexual and mental abuse that she underwent when her mother died, leaving her stepfather in charge of her affairs. John and Lodisha had tried to help her, but the threat by her stepfather that he would have them killed if they so much as whispered what was going on in his household to the county effectively bought their silence. Thus Rosie hid from the world her femininity and strutted around like a man, wanting nothing more than to yield a profit from the harvest reaped from the harsh landscape that is her stepfather’s home, just so she could best him in the one thing he had failed during his life.

Bowie doesn’t realize that there are complex layers to the woman he has got himself married to. Though Bowie has obligations back home, like a wife and a son, he knows that he owes Rosie and vows to stay on to repay his debt to her for the one harvest season. So it comes more than a surprise to Bowie when he first lays eyes on his wife, minus the dirt and grime that continuously cling to her skin and the unflattering clothes she prefers and feels a tug of desire unlike anything he has experienced before. And when Bowie finds the truth about the abuse she underwent with her stepfather, a clearer picture starts to form of the woman who donates so charitably towards those more needful than her but never gets acknowledged for it, a woman who was fiercely loyal to those whom she considered hers and a woman who craved the bottle so that she would feel less and forget her dark past.

Unwillingly, Bowie falls in love with Rosie, knowing that his duty lay with his wife Susan and son Nate back at home. Bowie had taken Susan as his wife when his brother had died after a freak accident, eliciting the promise from Bowie that he would take care of his pregnant girlfriend. So Bowie had married Susan out of a sense of duty and left her in the care of his father, Senator Stone. Knowing that they would be well cared for, until Bowie can make his way back to them is the only consolation he has whilst he works the harsh fields trying to give Rosie the one thing she desires above anything else.

It was beautiful the way Rosie slowly comes to trust and admire the man she marries and how this vulnerable woman opens up to the possibility of love and fiery passion with a man who seems to understand her every desire. Little by little, Rosie changes her ways, earns the respect of members of her county and finally ceases to be the drunk she is, just so she could be the wife who is worthy of the man she married.

This story moves along side by side with the story of Susan, Bowie’s actual wife and son Nate. Susan is basically thrown out into the streets as per the will of Senator Stone, who blames Susan for all that had befallen his son. Susan who had always relied on a man to make the tough decisions in life, a woman who had never had to lift a finger in all her life suddenly finds herself ladled with the daunting task of faring for herself for the first time in her life.

Her lawyer upon her desolate cry advises her to head west and that is how Susan finds herself answering the ad placed by Gresham Harte from Wyoming for a wife. Appearing with her son in tow, garbed in mourning attire doesn’t win Gresham over, and when he finds out that Susan had never had to work a day in her life, Gresham regretfully turns Susan away, though her beauty captivates the man inside of him.

It was riveting to read of how Susan overcomes the obstacles in her life, with the support and help of the community in Wyoming. Through hard found courage, Susan manages to attain the teacher’s position and from there onwards, life becomes more meaningful for a woman who had had nothing more major to do most days than to pick out the menu for the day. Inch by inch, Susan manages to overcome her fears and in the process fall in love with Gresham who reluctantly feels a responsibility towards her and finally succumbs to falling in love with her as well. However tragedy strikes when Nate is killed in a boating accident on the July fourth activities which devastates Susan more than anything else that had happened in her life.

So it is the promise that Bowie made to Nate that has him walking away from the one woman whom he holds dear to his heart more than anything else in this world and trudging onwards towards a future which looked bleak at best.

The Wives of Bowie Stone is a wonderful story, made more so by the fact that this tale depicts the lives of two equally brave women and the men who irrevocably falls in love with them. I loved the way Bowie slowly erased whatever fears that lurked within Rosie, how he slowly seduces her to fall in love with him and ultimately surrender to be the passionate woman she is meant to be.

Susan’s story too is beautiful in its own way, and made me admire her for the reserves of courage she finds within herself to face the harsh realities of life and overcome them to become a woman much stronger and more desirable for the fact.

Needless to say, I loved this novel and am looking forward to reading more from Ms. Osborne.