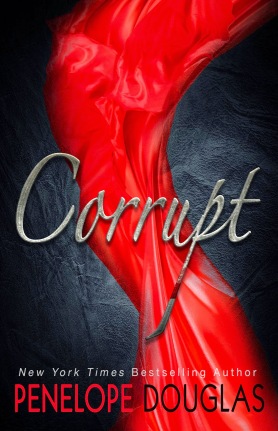 Corrupt by Penelope Douglas is my very first read from the author. My hankering for romances that are dark led me to Penelope’s books, and I decided to jump with both feet in where this book was concerned. Though Young Adult is not my preferred genre to read, some of the books that I have forayed into have made out to be pretty good reads. A word of warning though; Corrupt is definitely not for those that don’t like their comfort zones pushed. It is a read for those that dare venture into areas they are not comfortable with, but when all is said and done, you still feel a sense of rightness and understand that at the end, it was pretty much worth it.

19 year old Erika Fane is about to leave the gilded cage her life had been pretty much up till then. With the death of her father and her mother taking to drowning her sorrows and shrouding herself in the depression that had not let up since then had made Erika spend much of her time at the Crist’s place which is where her history with Michael Crist comes from. Erika had always had a huge crush on Michael, the older and more aloof version of Trevor, his younger brother who seems more malleable and definitely seems to have the hots for Erika. Erika finally manages to break free of the “accepted mold” her life has become, only to find out that she has run smack-dab into Michael and his group of friends who for some reason, want to exact revenge on her.

Michael has not forgiven Erika for what that fateful night a couple of years ago had culminated into. Neither is he willing to accept the fact that Erika matters to him on a level that his heart, body and soul cannot deny. Michael is not the conventional form of hero, who changes overnight at the mere entrance of the heroine into his life. Rather, Michael clings onto what has essentially protected him from Erika all along. The fact that his family has other plans where Erika is concerned means little to him as he makes his move on her, intending to teach her a lesson that she wouldn’t forget in a long, long time.

Corrupt is a story told in first person from both Erika and Michael’s point of view. I was glad it was told from both, because it would have been very difficult to get where Michael was coming from if not. Michael is harsh, and very much so at certain points in the story that one thinks he would never be able to redeem himself. The story is dark, no doubts about that. Elements that makes certain things almost unforgivable exists in the story and like I said before, Corrupt is not for the faint of heart.

Michael’s saving grace comes from the fact that he understood Erika better than anyone else and wasn’t afraid to give it to her exactly as she wants it. Erika’s brand of pain and pleasure is one that entwines one another, and Michael dishes it out in doses that Erika is more than woman enough to handle. Michael’s refusal to coddle Erika and give her the freedom that she craves for and desires is one that made Michael win points with me. He had never liked Erika being coddled left and right and when push comes to shove, though Michael’s possessive nature makes him protective as well, it doesn’t deter him from pushing Erika to stretch her wings and fly.

Erika’s point of view was equally important in determining whether Michael was exactly what she wanted and needed. Of course, her love for Michael had been one that had stemmed from long back, but that fateful night that had brought Michael and Erika together for a brief moment in time had also been the pivotal point whereby Erika had decided that she and Michael would never be. Though she is far from immune to Michael, Erika is determined that she would lead her own life, no matter how much she craves for the brand of pleasure that Michael is so good at dishing out.

When all is said and done, Michael and Erika’s backstory and entwined history gives that sense of right to their coming together. It’s not perfect, but then again, who wants the kind of perfect that barely skims the surface? I guess the point of comfort that was all the darkness in this novel stemmed from the fact that Michael and Erika; they are two halves of one whole and it is evident once the story reaches its ultimate conclusion. It all clicks into place because Michael, even though he plays mind games and fucks around with Erika in a misguided sense of seeking revenge, it is there in the way he can’t help himself but protect her from the worst of it. Because they are the ‘us’ neither can live without and fate had meant it so.

The ending had a surprising twist to it, perhaps one all readers might foresee as the story continues. Lots of possibilities for the emergence of a series exists in this novel and I for one clamor for books for the other guys in the story. Damon for one, is the darkest character in the story, at least from what Penelope has divulged so far. I believe he, more than anyone else deserves his own redemption and happily ever after. Kai is another character that intrigues me. Makes me wonder, what would it be that finally makes him go all in.

I loved the epilogue. It didn’t follow the traditional sense of an epilogue, but rather gives a peek into how Michael had gotten ‘corrupted’. Interesting tidbit to leave us with.

Corrupt is recommended for those that can take the pain with the pleasure. I believe, Penelope is an author to be contended with in the world of romances tinged with darkness.

[Erika] I twisted around, ready to leave, but then I looked up and instantly stopped.
My stomach flipped, and I couldn’t breathe.
Shit.
Michael sat in one of the cushioned chairs all the way at the back of the solarium, his eyes locked on mine, looking eerily calm.
Michael. The one that wasn’t nice. The one that wasn’t good to me.
My throat thickened, and I wanted to swallow, but I couldn’t move. I just stared, paralyzed. Had he been there since I first walked down? The whole time?
He leaned back in his heavy armchair, nearly shrouded by the darkness and the shadows of the trees overhead. One hand rested on a basketball that sat on top of his thigh, and the other hand lay on the armrest, the neck of a beer bottle hanging from his fingers.

[Erika] The closer he got, the taller his six feet four inches looked. Michael was lean but muscular, and he made me feel small. In many ways. He looked like he was walking straight for me, and my heart hammered in my chest as I narrowed my eyes, bracing myself.
But he didn’t stop.
The faint hint of his body wash hit me as he passed by, and I turned my head, my chest aching as he walked out the solarium doors without a word.

[Erika] Oh, God. He was right.
My eyes burned, and I wanted to cry. Goddammit, he was right.
I locked my ankles behind his back and held his shoulders as his hazel eyes stared at me. He wore jeans and a black hoodie, just like in the past.
I stared into his eyes and slowly slid my arms around his neck, the drumming in my chest charging every muscle in my body, making me strong.
“Yes,” I breathed out, bringing my lips close to his mask and taunting him. “Yes, it turns me on.”
And then I dived down, burying my lips in his neck and devouring him.

[Erika] He jerked me into him, going faster and harder, and the feel of him sliding in and out of me, finally taking me, was doing nothing to ease my need. I was hungrier.
I dived into his neck, breathing against his skin as I grazed my lips back and forth, whispering, “They all thought I was a good girl, Michael.” I dragged his lobe through my teeth. “But there’s so many bad things I want to do. Do dirty things to me.”
“Jesus,” he gasped, hooking an arm under my knee and yanking my ass into him, fucking harder as he let his head fall back.

[Michael] I lowered to my knees, standing above her as I pulled off my hoodie and T-shirt. Then, I pulled a condom out of my pocket and ripped it open.
“You may think I fuck with your head,” I said, looking down at her as I unbuckled my belt and unfastened my jeans, “but you don’t know what you’ve done to me all these years.”
I came down on top of her, forcing her legs apart as I pushed her arms back over her head and held her down with one hand.
Rolling the condom on, I dragged my cock up and down her wet slit, finding her hot entrance.
I breathed hard, whispering over her lips. “You don’t know.”

[Michael] She said she didn’t trust me, but I knew it was a lie. I’d be willing to bet I was the one person she trusted the most.
She and I were the same, after all. We fought shame every day, struggling with who we could let see the real us, and we’d finally found each other.
Unfortunately…we were fucked.

[Michael] I shouldn’t be able to look at her. I shouldn’t love to touch her, and I shouldn’t need to feel her wrapped around my cock every second since I’d first had her last night.
She wasn’t mine. She would never be mine.
And I shouldn’t want her.
I stood up and walked over to the bed, leaning down and studying her pretty face.
Fuck you, Rika.
Fuck you. I can’t choose you.

[Michael] “Such a good girl,” I growled in a whisper, flicking her lips with my tongue. “Say it, Rika.”
“I’m a good girl,” she panted, her voice shaky.
“And I’m going to fuck you up,” I finished, taking my hand off her breast and gripping her hip.
Diving down, I covered her lips with mine, eating her up and tasting her, her tongue meeting mine in more heat and fucking lust than I had ever felt for anyone.
My body was on fire, and I was gone.

[Michael] “I’m not tough, Michael,” she whispered. “Not really. I can play, and I can let you fuck me in your brother’s bed or on your father’s desk and use me as an object to get back at them, but in the end—” She paused and then continued, “In the end I’m still here, Michael. I’m still here. It’s still just you and me.”
She breathed hard against my skin, and I dropped my head, caving. I wrapped both of my arms around her and held her warm body tight as I buried my face in her neck. I couldn’t ever let her go.