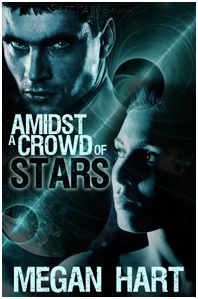 I have always come across rave reviews of books by Megan Hart and I think I did start out with one of her books sometime back which I never got round to reading more than a couple of pages. But after reading this book, I have the mind to hunt down the book I left hanging because Megan Hart writes a poignant story that really touches something deep inside of the reader.

Amidst a Crowd of Stars is a futuristic romance set on a planet called as Lujawed, a planet where the sun always shines relentlessly. The planet is harsh desert all around, the water hidden so deep within it that bringing forth water on such a dry land was a back breaking task in itself. Marrin Levy and her husband Seth with their two young girls make their way to Lujawed with her husband’s idealistic and unrealistic dreams to change their lives for the better. Lujawed had been one of those rare planets which had been settled without war. The native Lujawedians weren’t really forward minded people and didn’t give much thought to changing their lives for the better with irrigation, sanitation, roads, medical care and other such services Earthlings had come to depend on as the necessities in life.

When Seth had contracted a virus and died, leaving her with two girls and one more on the way with a mountain of debt in his wake, Marrin had been devastated to say the least. Many a time she had nearly given up and she would have returned back to Earth if they had had any money left, and nearly after 3 years of struggling in poverty, hunger and backbreaking labor had forced Marrin to send for what the Homesteaders called a “field-husband” with whom she had to enter into a contract which gives the husband conjugal rights in exchange for his labor.

When Keane Delacone steps onto Lujawed and smiles upon Marrin and her three daughters Aliya, Sarai and Hadassah and wins over the affections of the elder two right away, Marrin is taken aback even though she knows that Seveerans who didn’t reproduce where science had replaced childbirth, procreated solely via artificially inseminated and cultivated embryos, do not age like those from Earth. Technology had advanced so much for Seveerans that they had obliterated the aging process and their lifespans were limited only by accident or choice. Even then, Keane who had been 40 Earth years old when he had stepped onto Lujawed had looked younger than Marrin who had been 26 Earth years old then. But even then, Marrin had been taken in by the beauty that shone on the surface as well as deep within him, which she had come to acknowledge and love as one full rotation had passed with them living together, but never coming together as husband and wife.

With Keane by her side, life had prospered all around them. As love had  blossomed between the two, a love that had grown stronger with time, so had come about the realization of Seth’s dreams. The harsh desert landscape now yielded them with flowers and grass all year round, and Ashco their company had been borne, which currently was the largest supplier of fresh udeji melons in the entire county.

On a planet that rotated twice as fast around the sun as Earth does, the years had doubled for Merrin, but not her lifespan though her beloved husband does not look a day older than when he had first stepped onto Lujawed. I don’t think I can adequately describe the emotions that flitted through me whilst I was lost in the magic of the love between Merrin and Keane, a man so gentle and kind, the kind of man who knows what his partner wants and needs even when she doesn’t know how to voice her wants and desires. A man who is so patient as to wait for her to fulfill all that she wants in life and then some, to stand beside her in her victories and share every little thing in life that is important to her. Now, why can’t men like Keane exist in real life I wonder? *Huge sighing session begins*

The ending left me undoubtedly with tears in my eyes, made all the better with the unusual style in which the story is represented. Starting from the present day, Megan Hart takes us back through the years or rotations as they are called, beginning with a Merrin who was in her last days on the verge of death with an unwavering Keane by her side mistaken by the nurses at the hospital as Merrin’s grandson. Megan Hart then takes us on the journey of their life together which spans around 120 plus rotations during which her three children get married, start their own lives, Merrin retires on the request of her husband who has never asked for anything from her till then so they could spend whatever little time Merrin had left together. The ending which was bittersweet couldn’t have been more perfect than what it was and I am so very glad I read this short yet meaningful novel. My only wish as always is that this could have been longer.