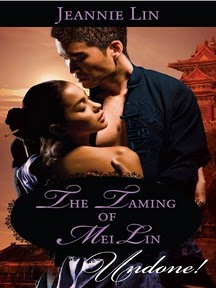 I don’t think this review is going to come off sounding any other way but gushy because I just loved everything about this very short, hot and well done novella.

The Taming of Mei Lin is a story set in the Tang Dynasty in 710 A.D. China. Wu Mei Lin is an impetuous and a very skilled swords woman who has been backed into a corner by Zhou, a lesser magistrate in the district who had proposed marriage to her after catching a glimpse of her at her uncle’s noodle stand where she works day in and day out. Mei Lin is more than disgusted to say  the least when a marriage proposal comes from a weasel like Zhou who already has 2 wives to his name. And thus Mei Lin puts forth the challenge that she would marry no man unless he defeats her in a sword fight.

Mei Lin is more than tired of the goons that Zhou has sent her way with the continuous ridicule from the townsfolk that label her a mad woman. When a handsome stranger comes across and offers to fight her, it is then that for the first time Mei Lin is seduced into surrendering everything she is capable of giving to the man who stands before her.

Shen Leung is captivated by the woman he spies across the noodle stand and though he is more than tempted to take what Mei Lin offers, his honor and his way of life which means he has nothing substantial to offer to a lady like Mei Lin makes him refuse to embrace what Mei Lin offers with both arms wide open. But the attraction that flares between them from the first moment they lay eyes on each other is a fierce one, which battles and wins against all odds going for them, which triumphs in a love that is as fierce that just left me begging for more.

Sigh! What a wonderful, wonderful story this turned out to be. For one thing, the historical time period and the location of the novel is a unique one lending this story a charm that is unbeatable when it comes to historical romances. Even though this is a very short novel; only just 5 chapters to it, Jeannie Lin still managed to captivate me with her beautiful style of bringing to life an attraction between two people who so rightfully deserve each other. I just loved Shen Leung to bits. His character reminds me of Shang from Mulan, but his character is so much more; honor & loyalty hardwired into his DNA which makes him an unbeatable contender in the unforgettable heroes department.

Is it just me or does reading about the fight that takes place between Mei Lin and Sheun just skyrocket the surrounding temperature by a couple of degrees? *fans self in the process of remembering* I just loved the sensuality that the author created in the novel and I just fell that much harder in love with both Mei Lin and just a tad more with Sheun because of the fact.

All in all, a very highly recommended novella for those who love to read historical romances.

I leave you with my favorite quote from the story, something Sheun says to Mei Lin when she has a hard time coming to terms with the strong and silent Sheun who doesn’t want to subject the sort of life he leads on the woman he loves.

“You don’t already know?” He leaned close so that his mouth grazed her earlobe. “Every time I touch you, it’s a promise.” His mouth explored a sensitive spot on her neck, sending a shiver through her that curled her toes. “And I always keep my promises.”