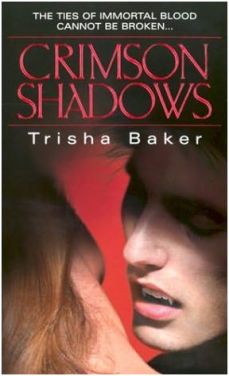 Its with a feeling of bittersweet melancholy coursing through me that I write this review and bid farewell to one of the most enthralling paranormal/horror romances that I have read to date. I bid farewell to my most favorite villainous hero Simon Baldevar with a heavy heart and I don’t think any hero that I come across afterwards would ever be able to completely surpass what he has made me feel throughout the trilogy.

Crimson Night, book 2 of the Crimson trilogy ended on a bittersweet note with Simon and Meghann going  their separate ways, torn apart by the one thing that was supposed to bring them closer to each other. Vampire pregnancies being rare caused much upheaval on Meghann and nearly destroyed her life before she bore Simon twins, Elizabeth their mortal daughter and Mikal their immortal son. Knowing that Simon’s enemies would never give them a moments peace if it were to come to light that an immortal vampire offspring walks the Earth, Simon does the most unselfish thing he has ever done in his life and subjects himself to separation from Meghann, the woman who holds his heart for eternity and their beautiful daughter to bring up their son who from the very beginning show signs of depravity unlike anything encountered before in the story.

Meghann brings up their beautiful daughter together with the help of her immortal friend and confidante Dr. Charles Tarleton and his life partner Dr. Lee Winslow who adopts Elizabeth as his own child and forgoes transformation to look after Elizabeth during daylight hours. 17 years pass by without any sort of connection between Simon and Meghann apart from the letters they exchange with one another. Elizabeth grows up knowing love and affection from 3 people who dote on her by her side whilst her twin brother Mikal with his unholy appetites and psychotic behavior grows up with his father on a remote Scottish island.

After 17 long years, Simon finally comes seeking his beloved daughter and Meghann whom he has missed more than he would ever let on. Their reunion though a happy one ends on a devastating note when Meghann realizes what her son Mikal is truly capable of with the utter force of destruction that he brings down on her loved ones with a cunningness that stuns them all.

Mikal’s need for vengeance and destruction goes beyond anything rational and before the day is through, both Simon and Meghann are forced to call on reserves of strength and summon friends and foes alike to fight a battle with their mutual enemy; their own son to save their most prized possession of all, their daughter Elizabeth from the clutches of a mad man who makes Simon seem puny in size when compared to the evil that seeps out of him.

Crimson Shadows is a fitting end to a love that has weathered many a storm between Meghann and her centuries old vampire husband Simon. Both Meghann and Simon do a lot of growing up to become worthy of each other’s love, the unabated desire between them strong as ever upon their reunion after 17 long years of celibacy and waiting for each other. However there is a vague sense of incompleteness as to how the story ended because I would have loved to see how the surprising love that stems and grows between Elizabeth and Simon’s hated enemy i.e. Meghann’s ex-lover Jimmy Delcroix fared in the end. And there were a couple of pages towards the end that I felt appalled at Simon’s instinctive lashing out towards Meghann because she dared protect Elizabeth and Jimmy from Simon’s wrath upon his discovery of their coming together that made me wonder whether Simon would ever learn to curb his inner demons and become someone who would never hurt the woman he loves. But I guess if that were to happen, Simon wouldn’t be true to his character and such a total turnabout would be in total antithesis to what we have come to expect from Simon.

Simon is a character that would continue to haunt me for a long time I suppose because even the most “evil” gamma heroes I have come across holds nothing when compared to Simon’s character which compels the reader to hate and love him in equal doses, love triumphing towards the end. The way how Simon’s character changes over time is what captivated me the most because this didn’t happen overnight but rather over a span of 70 years starting from 1944, the year Meghann was turned into a vampire beholden to her Master Simon Baldevar.

The last and final book in the series is definitely not for the faint of heart as once again Trisha Baker pulls no punches in delivering exactly what I have come to expect from her novels. Mikal’s character knows no boundaries when it comes to manifesting pure and unadulterated evil which just makes him a very worthy opponent for the invincible Simon. There were moments towards the end where my poor nails bore the brunt of my utter panic as there seemed to be no end to the cruelty that Mikal was capable of dishing out until the very end.

I recommend all 3 books to those who would love a twisted dark hero to seduce them completely and make you fall for him, however reluctant you may be to do so. I loved every single minute of this trilogy and am saddened by the fact that there are no novels published by the author afterwards.

I leave my review with a glimpse of the explosive reunion between Simon and Meghann after a 17 year period of separation that has done naught to bring down the combustive desire between them, a desire that has made both Simon and Meghann a slave to each other all throughout the years.

Simon hadn’t forgotten any of her secrets. Rapidly, he found her center and an orgasm rushed through her. She collapsed against the shiny surface of the car, mewling her pleasure while Simon brought her legs around his waist and drove into her.
Meghann climaxed again when he penetrated her, emitting a short, sharp cry of delight when she felt her body throb around the hard, swollen flesh encased within her.
“My Meghann,” Simon husked and put his mouth back on hers before she could reply, tell him yes, she was always and forever his Meghann, belonging only to him.