So, like the previous two months, I found myself picking two books that made fantastic reads for me, which I undoubtedly highly recommend to each and everyone who loves romances! While I managed to get the Q&A session with these posts ready for Pick #1, getting the answers from the author of Pick #2 didn’t prove to be doable.

Pick #1: The Dragon & The Pearl by Jeannie Lin 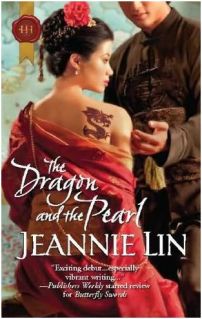 Author Jeannie Lin is one of a kind. I say this because for one thing she writes romances that are based in China during the Tang Dynasty. The prose she sets for her novels is an excellent one, one that the reader is helplessly drawn into, unable to let go until you have read every last morsel of the  story.

The Dragon & the Pearl was released by Harlequin on the 21st of September 2011. I was lucky enough to grab an ARC, having waited on tenterhooks for the release of Li Tao’s story. Li Tao’s character first appears in the novel Butterfly Swords which was released on October of last year. I managed to get Ms. Lin to answer a couple of questions regarding her latest release, which quickly made its way towards my favorite reads for the year 2011 and in turn became one my picks for the month for September 2011!

MBR: I have been hooked onto your books ever since I stumbled upon The Taming of Mei Lin. What made you venture into the unique setting of China to base your romances on? And the Tang Dynasty in particular?

JL: I grew up watching huge epic series based on the novels of Jin Yong (Louis Cha) and they just captured my imagination. These stories were the one thing that we shared across generations in my family: My grandmother, my parents, and me, my brother, my sister and all the cousins knew these tales. I always tried to explain what they were to my non-Asian friends, even trying to show them the episodes while I translated, but it was so hard to share with them what I loved so much. When I started trying to write my first novel, I think at the heart of it I wanted to be able to share this childhood love of the martial arts epics with people who hadn’t seen them yet.

The choice of the Tang Dynasty came from another historical series that revolved around the life and reign of Empress Wu and then the sequel about her daughter, Princess Taiping. I loved everything about that series: the costumes, the high drama, the intrigue. Most of all, it was the many empowered women of the Tang Dynasty that inspired me. As I researched Chinese imperial history, the more I learned about the Tang Dynasty, the more I felt it was the perfect place for adventure and romance.

MBR: At first when I picked up The Dragon & The Pearl, I thought to myself that Li Tao’s dangerousness would be mellowed to suite the requirements of the average romance reader. But, I was pleasantly surprised and later wowed by the fact that Li Tao remained true to his persona whom we come to know of in Butterfly Swords.
How did he emerge as a character into Butterfly Swords at first? Is he based on any real life person you might know of? And what made you decide not to let him be cast as just a villain but paint him in shades of grey so that he could have his own happily ever after in the end?

JL: His character development in Butterfly Swords is an interesting one. I very loosely plot my books and the last part of Butterfly Swords indicated that Ai Li and Ryam would be captured by the villain and there would be a showdown. That was it. So as I wrote the first half of the book, I wondered to myself who was this guy? My heroine had never met him, but she hates him because she’s learned he’s a traitor. I wondered would I make him cowardly? Would he be scheming and self-centered? Would he be old and fat and gross? It’s so easy to make a villain especially nasty so everyone knows he’s supposed to lose. In romance, the villains are often greedy, vengeful and shallow. They may leer and try to force themselves on the heroine. None of that was working for me.

The hero of Butterfly Swords, Ryam, was struggling with issues of worthiness and Ai Li was struggling with issues of duty and honor. In order to give them a worthy opponent, I decided I had to make him in many ways better than they were, though still a villain. Some of my favorite wuxia characters were villains or morally complex characters so following in that tradition, I created Li Tao with actually a deep sense of honor — only it was his own. It’s so easy to see what way the heroine should go when her family is forcing her into marriage with someone’s who is truly nasty, but what if Ai Li’s adversaries were well-meaning parents and a man who was by all rights, a bigger and more magnificent figure than the one she had chosen with her heart? That would truly be a test of love and conviction.

He’s not based on any real person I know, but a lot of his stubbornness and sense of conviction reminds me of my husband. (Shh….he doesn’t know). I think all characters should be gray as that’s more realistic. I didn’t intend for Li Tao to be a hero in a sequel to near the end of the writing of Butterfly Swords. In order to truly create this villain as a compelling character in so short a time, I experimented by plotting the last part of Butterfly like the beginning of a romance–only it was the heroine meeting the villain instead of the hero. If you track the events of the end game, you’ll actually see very familiar elements: Ai Li and Li Tao meet, they fight, the sparks fly. She accuses him of being a traitor, he accuses her of being impetuous and reckless.  If she hadn’t already had her adventures and fallen in love, this could have been the beginning of a hot romance! My sister recognized it immediately and told me that  Li Tao had to be my next hero.

MBR: You have a talent for creating heroines of the most unusual calibre, who nevertheless have that inner courage and fire deep inside that makes them very worthy as heroines.

JL: Ling Suyin actually is the only character that appears in all three of the manuscripts I’d written prior to publication. (Butterfly Swords was #2, BTW). She was inspired by the historical character of Yang Yuhuan who was better known as Yang Guifei (Precious Consort Yang) and one of the Four Beauties of China. I had thought about her character a lot in the other books where she was just a secondary, and though she didn’t get as much time front and center, I had in my head that she was a lot more complex that she appeared. I do a lot of daydreaming to figure out characters before I try to fit them into a story and all the little twist and turns that her life had taken kind of emerged as I tried to form why she was the way she was. All the surprises felt right–like an “Ah, that explains it” moment.

MBR: Looking forward to many more such great reads from you.

Author Jeannie Lin has very graciously agreed to giveaway a copy of The Dragon & The Pearl, whether it be an e-copy or the print version which is up for the winner to decide.

As most of you all already know, I am a HUGE fan of Sandra Brown. I still remember reading my first Sandra Brown back in the 90’s which turned out to be French Silk. From then onwards, I always made it a point to seek out her books whenever I could.

Though her later books have been disappointing in the fact that the story is more focused on the suspense aspect than the development of romance between the hero and heroine, with Lethal, Sandra Brown proves that she hasn’t forgotten nor has strayed far from knowing how to deliver a good dose of romance with the suspense aspect of the novel.

If you are fan of Sandra Brown like myself, this one’s a must-read!

This post’s giveaway includes a copy of Jeannie Lin’s The Dragon & the Pearl and a Kindle copy of Lethal by Sandra Brown.

Thank you all so much for being a part of MBR’s Pick of the Month posts! And don’t forget to enter the giveaway!