This February, my two picks are contemporary romances, my favorite genre of romance. They are titles from great authors, whose books I adore and would never pass an opportunity to indulge. So without further ado, my picks for the month of February 2012 ladies and gentlemen.

Pick #1: More than One Night by Sarah Mayberry 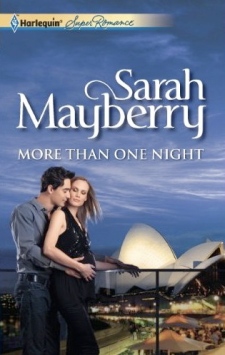 MBR: Undoubtedly, Charlie is one of the most unusual heroines I have ever come across. How did she morph her way into becoming one of the lead characters of your latest novel?

SM: When I thought about this scenario (an accidental pregnancy) one of the things that I thought was vital to the believability of the story was that there be a real reason for either the hero or heroine to walk away from what was undoubtably an awesome night of smokin’ hot sauciness. Obviously, a man bailing the way Charlie did would make him a complete alphahole (to quote Karina Bliss!) but a woman needs some pretty powerful reasons, too. Charlie popped into my head almost fully formed as I considered why someone would sneak away from a one night stand like that. The fact that she’d been in the army, her aloneness, her lack of self esteem – it was all there. I’m not sure why or how that happened, and it certainly doesn’t happen with all my characters, but that’s the way it was with her. Romance tends to be a genre that plays with self-deprecating heroines who undervalue themselves on some level – appearance, achievements, whatever, but I really wanted to explore what a woman would be like who believes herself to be intrinsically unlovable. She’s missed out on her mother’s love because she died giving birth, and her father never expressed his love for her… She needs someone like Rhys so badly. She was actually one of the most personally heartbreaking heroines I’ve ever written.

MBR: As I mentioned in my review, you have taken a plot that is pretty much cliche’ in romanceldia and managed to make it a memorable one. What made you follow this plot line and explore the possibility of a happily ever after with two characters such as Rhys and Charlie?

SM: As you said, this plot is as old as Adam and Eve. Most romance tropes or themes have been written a million times in a million different ways – it’s rare to find an author blazing entirely new territory. I have long believed that it’s the author’s “take” on a theme or a common trope that makes it different from another writer’s efforts, and for some reason the idea of tackling the accidental baby scenario tip-toed across my mind when I was coming up with proposals for future books. And, once I’d started thinking about how you bring about an accidental pregnancy, I imagined Charlie and Rhys and knew that I *had* to write this story because I had to give Charlie her HEA. So, really, I was toying with the trope, exploring it as a story starter, and then I found the characters and got sucked in…

MBR: I have my own reasons for admitting to the fact that Charlie was a character who drove me to tear. In your opinion, what is it about Charlie that makes a reader bleed while reading her story?

SM:  I don’t know if you have seen the New Zealand movie Whale Rider, but I pretty much bawled my eyes out through the whole thing. I found it an incredibly emotional experience, and everyone I know felt the same way (but perhaps with not quite the same amount of eye leakage!). The theme of this movie is parental approval – a little girl striving desperately to earn her grandfather’s approval and attention (he’s her stand-in parent). I think it’s a universal theme, because most of us have experienced at the minimum a moment where we wanted/needed our father or mother’s approval/love and were uncertain about it. You see little children following their parents around all the time,waiting for their gaze to fall on them. And the way kids light up like little beacons when they get a pat on the back or a hug or praise… It’s powerful stuff and even if we get better at denying and rationalising our need as adults, those visceral memories are still there, buried deep. Charlie has missed out on so much a lot of us take for granted, and I think it’s a rare person indeed who hasn’t had moments of self doubt the way she does. Beneath her no-nonsense, get-business-done demeanor, she’s hugely vulnerable and incredibly sensitive. And scared, too. Certainly, I have experienced moments of self doubt the way she has, which is what I channeled when writing this story.

MBR: So what is next from Sarah Mayberry?

SM: My next release is called Within Reach. It’s an August release and is about Angie and Michael and the year they spend in each other’s pockets trying to get through the grief of losing Michael’s wife, Billie, who was Angie’s BFF.  I called it “the grief book” while I was writing it, for obvious reasons. Angie and Michael have absolutely no interest in each other at the start of the book. Billie is their point of connection, but when she dies suddenly and unexpectedly, they begin a whole new phase of their relationship as Angie does her damnedest to help keep Michael and his two kids’ heads above water through difficult times.  As they grow to know each other as friends instead of merely through Billie, they forge a true connection – and discover an unwanted, unwilling mutual attraction. It’s not something either of them even want to acknowledge, and it comes with lots of guilt and denial – but it’s fueled by some pretty hot sexual attraction and eventually Things Happen (cough). There was some tough stuff in this book and I desperately wanted another 10,000 words to play with… but, sadly, they were not on the table. I’m waiting to hear back from my editor on final edits – it’s running a little late! – but I’m looking forward to seeing how this one winds up and what the wonderful Harlequin art department comes up with, cover wise. 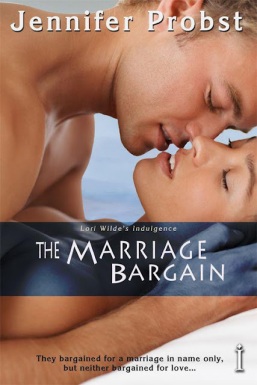 MBR: I would be the first to admit, you completely blew me away with The Marriage Bargain. And the thread of humor in the novel is very nicely done. What made you come up with the Marriage to a Billionaire series?

JP: I’m so glad you loved the humor! First off, I adore marriages of convenience – it’s always been one of my favorite themes, with a wonderful way to force the hero and heroine together and demand they deal with their relationship. I decided to write a book with the common theme but twist it to include other items I love to see in a great romance:  quick wit and sharp conversation between the hero and heroine, tons of sexual tension, and the crazy, everyday chaos that is life. This includes but is not limited to: dogs, toddlers, and big old fashioned families! It started with an idea for a love spell. A girlfriend told me about a spell where you make a list of all the specific qualities in a mate and the universe will send him. This intrigued me, and what a great idea for an opening scene! Of course, being a writer, I wondered what would happen if the universe seemed to send the wrong man, and they were stuck with one another. Fun for me..not as much for them until the end!

MBR: Alexa was such a wonderful heroine. She landed in my list of favorite heroines just because of that. How did you come with her character, give her that wholesome family experience that makes her the well balanced character she is?

JP: I’m so glad you love Alexa! She was such an easy character to live with while I wrote her story. I related to her, and I loved the way she took the bad stuff that happened in her family and transformed it. I’m struck a lot by different family tales, and how no one’s past is ever perfect. Alcoholism, infidelity, neglect, abuse, or just being ignored can cause a person, and a character, to be scarred. Alexa may have had a rocky past, but she was able to work her way through to forgiveness. She never turned her back on her family, and they stuck together. Forgiveness is a powerful tool in Alexa’s arsenal, along with a good cheer and humor that gets her through life. What I love most about Alexa is she’s one us – working on the day to day stuff, getting messy, letting herself feel and experience it all. She’s in the trenches and not up on some pedestal. That is what I wanted to sketch out the most in her character and I hope I succeeded.

MBR:I loved so many things about Nick and I could gush on about him forever. What would you say is your most favorite trait about his character as the one who created him?

JP: Lord, I love Nick. He will always hold a very special place in my heart. Nick is full of love and goodness, but never got a chance to show it or express any of those feelings, nor receive them back. Then all the negativity blocked him from ever truly growing, until he meets Alexa. My favorite trait is his ability to be loyal, and to finally push past his fear to take a chance on love. We all need courage for that. His huge leap at the end of the book puts it all out there – and that terrified the poor man (but I made him do it anyway – hee hee!) Oh, and I just love all that fierce passionate focus when he’s either designing his buildings or seducing Alexa…who wouldn’t love that?

MBR: So what is next from Jennifer Probst?

JP: Yes! I am very excited to say I’m working on Maggie and the Count’s story entitled The Marriage Trap. Maggie was a bit pushy in The Marriage Bargain. After the first draft, I noticed she had tried to take over the book! So, I promised I’d write her story next, then I pried her out of many pages so Alexa could shine. Now it’s finally Maggie’s turn, and she’s just as pushy in her own story! But this one will take my readers to Bergamo and Milan, Italy, where you will meet many new characters, revisit some old, and watch Michael and Maggie embark on a fake marriage to satisfy an old family custom.

Thank you so much for this wonderful opportunity to talk about my books, interact with your readers, and be spotlighted on one of my favorite review sites!