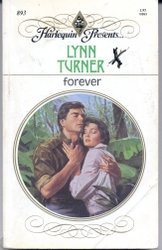 Forever by Lynn Turner is a novel that I stumbled upon in my attempts to find more jungle-trek themed romances. Published in 1986, this is an old-school romance that does a good job of the character development, the setting as well as the romance and passion between the main characters.

44 year old Colonel Sam Forrester is sought out by the prim and proper 24 year old Bernadette Chapman whose a teacher and a librarian to find out whether Sam could help her out in her current predicament. Stranded with 6 school girls and their headmistress who had taken ill with Malaria, the only thing Bernadette wants is for all of them to safely get back home. Though she doesn’t know what to expect when it comes to Sam, there is no hiding from the fact that he is unlike any man Bernadette has ever encountered before, a man who has been hardened by his experiences in life.

A chain of events sees Sam and Bernadette traipsing through the dense African jungle, making their way towards civilization. The prickling awareness that they have of each other is always a constant presence, the desire to explore where the heady feelings each invokes in the other making a situation fraught with danger even more tense. The only thing that saves Bernadette from making a fool of herself and succumbing to the sensual demands of her body when it comes to Sam is the fact that Sam thinks her to be a Nun, a lie that Bernadette makes full use of in order to protect herself from a sensual and emotional assault that she knows would be devastating on her.

With just the right amount of action in between the pages of taut sensuality, Forever is a novel that proved to be both captivating and thrilling at the same time. The first half of the book kept me on tenterhooks, Sam’s surly nature and possessive jealousy when it comes to Bernadette who remains unaware of the fact such a thrill delve into. But when the “lie” about Bernadette came into the picture and seemed to drag on for quite a long while, some of the joy I felt with Bernadette’s character diminished. When it comes to romances, what I want for my hero and heroine is to want each other to the point of no-return, in spite of each and every obstacle that stands in their way. For me, dragging on the lie for just a tad too long didn’t seem to sit that well.

Sam’s character was one I fell instantly in love with. He is gorgeous looking, cynical as they come and has that growling thing down to a fine art which had my insides going on red alert every single time. Though he is a bit older than the usual heroes you encounter in these types of romances, for me his character worked well in the story. With his background and expertise as a soldier, Sam proves to be a hero worthy of the various sighing sessions that I indulged in whilst reading Forever.

Bernadette was an okay heroine for me. There were times I loved her for wanting to comfort Sam even though he seems like the last man on Earth who would want any sort of comfort she might have to offer. And then there were times I wanted to scream in frustration because she continued with the facade of being a Nun when it was obvious that misleading a man who confesses to being tired of women’s manipulations and lies would hardly prove to be the best way to go about winning the said man’s affections. However, in the end, it all seemed to work out. I loved how Sam goes after Bernadette in the end lending this romance a pretty good ending.

The one thing that I absolutely loved was the banter between the characters. I found myself smiling through a lot of their conversations, at one time eliciting the question from my husband why was I smiling so much! I loved how Sam’s teasing side came into play with Bernadette, plain evidence of his obvious affection and growing feelings towards her though the story is told almost 99% of the time from Bernadette’s point of view.

Since I loved Sam’s character so much, and because I loved how everything turned out in the end, I am willing to forgive the lapse in what happened towards the latter part of the story and rate this a great read, recommended for fans of jungle-trek themed romances featuring a tortured & cynical hero who falls like a ton of bricks for the right woman!

She would remember that voice as long as she lived, Bernadette thought. It was low and slightly harsh, as if he was hoarse from yelling at the top of his lungs all day. Yet there was a deep resonance to it, as well. It seemed to come from the soles of his feet, rumbling up through that long, tough-looking body and somehow being muted by the time it reached his throat. No, she revised the whimsical reflection; not muted, but tamed a little, civilised for the benefit of those who might hear it.

Their conversation was limited to monosyllables, few and far between, and either consciously or unconsciously   spoken in French. The language should have sounded clumsy or discordant when spoken in Forrester’s normal growl, but it didn’t. Instead, his terse questions and muttered comments came out sounding like impatient love words, deliciously sexy; as if the engine he was working on was a temperamental woman whose pretence at reluctance might irritate him, but for whom he would play the game because of the reward he knew he’d receive at the end of it.

‘Does this ring any bells?’ he murmured against her lips.
‘I——-‘
Whatever else she’d been about to say was lost as he kissed her again. His gentleness took her by surprise, and without being fully aware that she was doing it she started kissing him back, just as gently.
His hand curved to fit her waist as he murmured something unintelligible, his long fingers sliding with masterful confidence to her ribcage.

‘God, I want you,’ he breathed, and Bernadette’s throat closed, trapping her breath, while every last ounce of strength drained out of her and left her with knees turned suddenly to rubber.
‘I’ve never said that to a nun before,’ he mused wryly. ‘But then I’ve never met a nun like you. I doubt anyone has. What business has a woman Like you got being a nun, for the love of God!’

He released something elemental in her, some primitive force she hadn’t even been aware of until he came along. It was frightening, in a way, but it was also exhilarating and incredibly exciting. And the jungle, steamy and frought with hidden dangers, seemed the perfect setting for their coming together.

He moaned her name against her lips, and then at her temple, and her closed eyes. It seemed to be all he could say, the only word he knew. She remembered how she’d once been incensed by his lazy, mocking use of that butchered form of Bernadette, and decided she had been a pathetic little idiot.