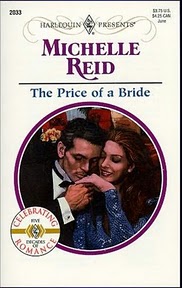 Its being so long since I have been able to put up a review that I am afraid I may have forgotten how to write one. Stuff at work is seriously cutting into my reading time which in turn brings down my reviewing time – which is all a vicious cycle I tell you. Since I have been so very busy, I decided to go with a lighter read, a Harlequin romance that has been in my to-be-read pile for quite sometime now and see whether I would be able to finish it up before the turn of the next century.

Michelle Reid being one of my favorite Harlequin authors, at least of her older books, I had high expectations when I started out with The Price of a Bride. The one thing that older titles of Harlequin have going for them is the fact that the good books tend to deliver a lot on the emotional wrangling content which makes them very memorable reads in the end.

The story starts out when Jack Frazier, 25 year old Mia Frazier’s father forces 34 year old wealthy and ultra rich Greek tycoon Alexander Doumas into agreeing to marry his daughter. For reasons that Mia refuses to reveal, she hides behind the lie that the reason that she is agreeing to the unholy alliance is only because she has a lot to gain on the monetary side from her father.

Though Alex has been after Mia ever since he had laid eyes upon her and though Mia had tried her damnedest to thwart his attempts at wooing her into his bed, it is a very angry and resentful Alex that agrees to the marriage that takes place between them. Since neither is able to deny or walk away from the combustive passion that lights up the pages from the beginning, their relationship begins as a purely sexual one from which Mia is supposed to provide her father with a heir to his vast business empire, which then only would ensure that Mia gets what she wants out of the deal.

The feelings that crop up in Mia’s heart for her husband though unwanted foster into love and wanting before she knows it and is in danger for the first time in her life of being vulnerable towards a man that has a strong hold on her emotions. Mia’s father Jack is a piece of work that deserves nothing better than being fed to the dogs and though certain aspects of the story were predictable from the beginning, I loved the emotional wallop that this one packed which touched all the right places in the end.

I loved the fact that this story was told from only Mia’s point of view which gave me the chance to gauge Alex’s burgeoning feelings towards his wife from his reactions that were described throughout the story. It always tends to get on my nerves in any type of romance when the heroine tends to play hard to get and tends to blame the hero because she becomes dynamite in his arms. It was good to see that Mia was no such heroine and that she embraced her sensual nature when it comes to Alex and plays no coy games to get on the nerves of the reader. The only aspect of the novel that didn’t feel right for me was the ending from which I expected just a tad more though I am hard put to say what it is exactly that I am looking for. All in all, a very enjoyable Harlequin romance that is highly recommended for fans of Harlequin romances, forced marriages of convenience and fans of Michelle Reid.