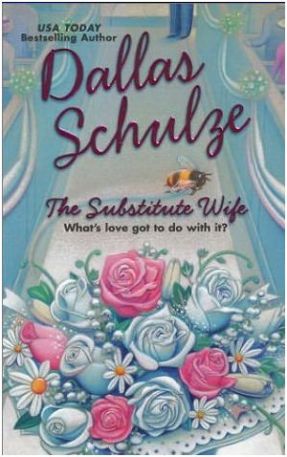 I have been wanting to read The Substitute Wife by Dallas Schulze for a long time. And whilst I enjoyed this book immensely, I had to bring down the rating from 5-stars because I felt that the hero did not really grovel enough to win back the affections of the heroine.

Catherine Willow Rain Skywalker Lang (I know, its a mouthful but it suites her well and good) grows up with a hippie for a mother whose wanderlust nature provided Cat with a very unique sort of childhood. Thus Cat had learnt at a very young age to become an “adult” and a responsible child with her unconventional education that nevertheless grows up to be a beautiful woman inside and out. It had been a gangly 13 year old Cat that had met her beautiful 20 year old sort of step-sister Devon whose father Larry had been the only family that Cat had known through her transformation from a teenager into womanhood.

When Cat finds out that Devon is running away with her first love and breaking off her engagement to Luke Quintain with whom Cat had fallen in love at first sight, Cat’s tender hearted nature refuses to let Luke hear about the broken engagement just mere weeks before the wedding via the post. So it is because Cat wants to deliver the news of the broken engagement in person that she finds herself on the doorstep of the ultra rich real estate tycoon for whom her heart clamors for something fierce.

Somehow Luke finds himself at the receiving end of the news of a broken engagement and Cat somehow leaves with a ring on her finger after proposing that she take Devon’s place instead. Luke agrees because he can’t help his reaction to the tall and red-haired beauty with the green eyes who calls to his baser instincts in a way that has never happened before. Though its a marriage of convenience to which Luke agrees to with a tight prenuptial to neatly tie things up, their marriage from the first moment itself becomes something much more than Luke bargained for.

Though Cat enters a marriage that has its divorce date already decided upon, her heart cannot help but yearn for Luke and his love to be hers till death does them apart. Trouble comes calling when Devon returns and Cat finds herself carrying Luke’s baby, something that wasn’t included in Luke’s agreement with his delectable wife whom he can’t seem to get enough of.

Luke who is definitely scarred on the inside from the trauma of witnessing the roller coaster of a marriage between his parents is a man who knows he is not the right material for a happily ever after. And with the earth shattering news about his imminent fatherhood, Luke does the unforgivable and finally manages to drive Cat and her love out of his life, taking him back to the bleak existence his life was before Cat lit it up with her love and her giving nature.

I loved so many things about this book right from the very first page itself. There is so much humor packed into this story that I swear that I couldn’t help but laugh out loud several times. Luke’s grouchy grandfather Nick who forces Luke’s hand in getting married is an interesting character who lends the story a charm of its own kind. Cat is such a wonderful, wonderful heroine that I absolutely fell head over heels in love with. I know, weird right? But you would have to read this one to understand what I am talking about. Cat has so many endearing qualities that you can’t help but be drawn towards her character. She is so comfortable with who she is that she continues to astound Luke, Nick and everyone who doesn’t know her that well and continually surprised me with her quirky comebacks and teasing nature. She is so very vulnerable when it comes to Luke who hurts her in the worst way possible, but still she manages to stand up for herself and work things out. And let me not forget Cat’s best friend Jack whose relationship with Luke’s best friend was an interesting facet of the novel as well.

And alas, I come to the part where my rating for this novel had to be brought down from a solid 5-stars to the 4-star rating it received. Mainly because I don’t think Luke really did enough towards the end to make up for what he did to Cat. I wanted him to grovel a bit more, and with more sincerity than that he showed. And Cat being the wonderful woman she is and because she loves Luke to distraction, she takes him back upon his one attempt at groveling and apologizing to her for what he did. Totally didn’t sit well with me. But, nevertheless Luke still makes for a sexy hero whose reluctant reactions towards Cat was one that I savored to the max.

Recommended for fans of contemporary romances with the marriage of convenience setting.

“So, give it to me straight.” Luke turned to look at her, long fingers cradling the snifter. “I take it Devon’s absence is permanent?”
Cat nodded reluctantly. He didn’t look like a man whose heart was breaking. He looked irritated and maybe a little relieved. Or was that just wishful thinking on her part?
“She’s decided to become a nun? Having a sex change operation? Run off to join the circus?”
“A dairy farm,” Cat said, and Luke’s brows rose.
“She’s joined a diary farm? I didn’t know you could do that.”
“Not joined one so much as …well, actually she’s sort of marrying one.”
“Marrying a diary farm?” One corner of his mouth curved up. “She’s going to need a pretty big church, isn’t she?” (Totally had me cracking up!)

This was no gentle, exploratory first kiss. He took her mouth like a conquering warrior, not asking for a response but demanding it. Cat’s hands tightened on his arms, as if to push him away, and then she was melting into him, her mouth opening to his, her body curving against his. Luke felt a surge of triumph race through him, and he slid one arm around her waist, pulling her closer, deepening the kiss, his tongue slicking over hers.
The kiss was hungry and carnal, a kiss meant for lovers. She whimpered, a low sound in the back of her throat. It wasn’t a protest. It was a plea. She rose on her tiptoe, her fingers curling into his dark hair as her mouth opened to his, inviting him to take more, to take her.

Cat tilted her head back, looking up at him. The rest lamp leeched the color from everything it touched, painting her in shades of dark and light. Dark hair, pale skin, her eyes deep mysterious pools, the almost-bruised darkness of her mouth. She didn’t say anything, didn’t pull back as he lifted his free hand and slid his fingers into the soft knot of her hair, searching out the pins that held it and pulling them loose, letting them scatter on the pavement. Her hair tumbled around her shoulders, and Luke curled his hand into it, letting it slide through his fingers. He felt a nearly painful surge of need. Hunger. Anger that he wanted her so much, that he had so little control where she was concerned.