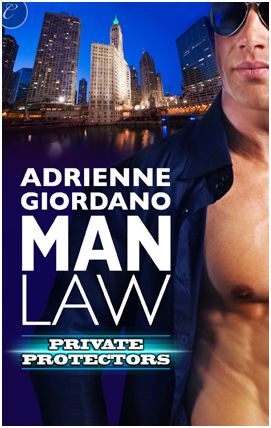 Man Law by Adrienne Giordano is the debut novel of the Private Protectors series set to be released on the 4th of July by Carina Press. Lately Carina Press has published some very great books which in turn has introduced voracious readers such as myself to a number of fabulous and really talented authors for which I am forever grateful to Carina Press.

Man Law tells the story of the sexy Vic Andrews with his distracting goatee and his unwanted attraction towards his best friend Mike’s younger sister Gina Delgado, a single mother with three kids, who has been a widow for the past four years. Vic is a man who lives by and follows only his Man laws and he screws that up royally when he has mind numbing sexual encounters with Gina in the basement of her house, at the beach and the next time in her kitchen. Though Vic and Gina both brush those off as brain farts, they both know that the underlying attraction that always ignites whenever they are together won’t be brushed aside just that easily.

When one of Vics’s assignments come back to haunt him and the target this time is Gina and her kids, Vic knows that he won’t let anything happen to them as long as he is able to draw breathe from his body. To say that Vic has commitment issues and emotional garbage is to put things mildly. But Gina is determined that Vic decide once and for all whether what they have between them is worth exploring or walking away from. What Gina wouldn’t back down from is that she won’t say yes to a relationship with a man who puts his life constantly in danger, having once already gone through hell after the untimely death of her husband.

What made Man Law such an interesting story was because of the way the author brings in all the characters and let them do their thing. Lily, Gina’s youngest is so adorable that you can’t help but grin at her conversations with Vic who might think he is clueless when it comes to kids but does so very well in that department as well. Gina fights for what she wants and when it is Vic that she sets her sights on, she doesn’t let him that easily off the hook when the last thing he wants to do is talk about how he feels.

The twenty four hour surveillance that Taylor Security pulls off on Gina’s family certainly brings Vic that much closer for the first time in his life to saying yes to commitment, but for Vic that might not be what fate has in store for him when he leaves Gina to hunt down his enemy, knowing that without that final act of vengeance on his part, he would never  be able to look himself in the mirror ever again.

I just flat-out loved Vic’s sense of humor and the way his thoughts filter out to bring a smile to the reader’s face even during the most charged moments in the story. The thing that drew me in the most was that every part of the story felt real from the humor to the teenage crabby issues to the passion and love that flares between Gina and Vic. And if I hadn’t already been half in love with Vic by the end of the story, the last chapter would have convinced me to go all the way as I just simply adored the ending.

Filled to the brim with humor, sizzling sexual tension, romance with a love that grows on you, Man Law is a summer read not to be missed out on!

Recommended for those who love romantic suspense, adventure and romance in one setting.

Definitely looking forward to the rest of the novels in the series.