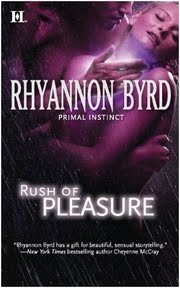 The eighth and final book in the Primal Instincts series was a definite hit with me. Combining the fantastic paranormal world that is so easy to get to know with mind numbing and page scorching passion to light up the entire country for eons to come, Noah and Willow definitely earned their rightful place as one of my favorite couples from the series.

Noah David Winston is part Casus, thanks to his mother’s line of family. Noah remains vulnerable to the fact that a stray Casus shade who has made its way into this world can make use of his body to roam the Earth. With the added threat of the Casus leader actively seeking Noah as the most probable candidate for his inhabitation and because Noah had nearly managed to kill off Anthony Calder during the last bloody battle that was waged between the Watchmen and the Casus, Noah knows that the fate of all species of the world rests in the decoding the spell that is bound to kill anything with pure unadulterated evil lurking within its very soul.

Decoding the spell means revisiting his hometown Sacred in Louisiana, where he hasn’t set foot since that fateful night twelve years back. His desire for Willow Broussard even at the tender age of nineteen had surpassed anything Noah has ever felt since then. When Noah seeks out Jessie, Willow’s aunt whose powerful spells is the stuff legends are made of, Noah doesn’t expect a run in with the woman who makes all his senses go on red alert just with her mere presence.

Willow would rather gnaw off her arm than admit that seeing the gorgeous Noah Winston in her own backyard once again sets all her senses afire with the need to possess and be possessed by the man who haunts her dreams even twelve years on. Now a private investigator for the ancient clans who still walk the Earth, Willow is strong, sexy and capable in her own right, a fact that drives Noah completely out of his mind when the desire he feels for Willow threatens to obliterate the very seriousness of the mission he has embarked upon.

Forced to work together by circumstance, the barriers that each had built in the other’s absence starts to crumble with each searing glance and mind numbing kiss exchanged. As the truth about what is actually required to perform the spell comes to light, Noah knows that he is about to embark upon a battle that could mean the end of life as he knows it, a life he would gladly give up if it means keeping Willow safe. As the dead body count continues to grow, Willow joins hands with the man to whom her heart will belong to now and forever, to fight the battle that might cost her the love of her life even before she can confess the little fact to him.

Rush of Pleasure is a fitting end to a series that has saw me through highly enjoyable paranormal reads with the tinge of red hot passion to make things that much more interesting. Noah Weston is a dangerous man to let into your heart because he demands no less than complete and utter surrender of every emotion that you’ve got to give. His strength and vulnerability coupled with his blatant need for the woman he loves is a lethal combination that had me hyperventilating one minute and swooning into a puddle of goo the next.

Willow is the perfect heroine for Noah with her strong persona that makes her the ultimate candidate to love and cherish Noah and even stand firm in what she believes in when its for the good of their relationship. Noah might not overly much like the fact that his Willow is kick-ass heroine material that puts her on the path of danger every now and then, but that’s what at the end of the day makes these two such a well matched couple in bed and out of it.

The scenes of combustive passion definitely delivered on the sexual tension that practically leaps out of the pages and I loved every single second of it! Explosive in all the ways that counts, Rush of Pleasure is a novel not to be missed for fans of the series as well as fans of paranormal romances.

The one thing that I can say is, you don’t need to have read the previous books to enjoy this one as Rhyannon makes it so darn easy for you to find your rhythm in her world of ancient clans. But, I would still urge you to read the other books; just to enjoy the wild and wicked ride that only Rhyannon can take you on in her Primal Instinct series.

I feet a bit sad knowing that this is the end of a series that I have enjoyed immensely throughout the last 2 years or so. But knowing that the sexy and deadly Ashe Granger from the series gets his story in a standalone novel this coming April has got me pacified somewhat, and I await eagerly for its release. And I would so love to read Damon MacCaven the demon’s story! Just saying.

She didn’t fight him, but her mouth had been shocked into stillness beneath his—passive, simply taking, accepting—and he wanted her hunger. Wanted the bite of her nails and her mind-blowing passion.
He wanted her wild for him.
“Goddamn it, kiss me back,” he snarled, holding the side of her face in his hand. She moaned, tilting her head, fitting her mouth more closely to his. “Please,” he gasped against her silky lips, his voice cracking as he begged her…pleading.
“Kiss me back, Will.”
And then he felt the soft, sweet stroke of her tongue, and his body shuddered violently in response to that delicate, seeking touch. Within seconds, the kiss became something explicitly carnal, devastating in its power.