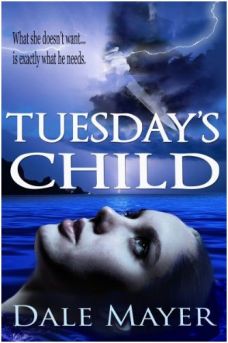 Tuesday’s Child by Dale Mayer is the first book in the Psychic Visions series. 28 year old Samantha Blair (Sam) is a psychic who has a hard time accepting her ‘gift’ as it has brought nothing but pain, humiliation and loneliness into her bleak existence. Growing up in different foster homes that she had found no solace from, Sam now lives alone, practically in isolation where she feels at ease. Working part time at a vet brings her the peace that is her lifeline when her visions practically force her to experience every excruciating detail of what the victims of extreme violence go through until their death comes calling.

35 year old Detective Brandt Sutherland is tracking down a vicious serial killer who hunts and kills beautiful women in committed relationships. Having tracked him to Portland from where he hasn’t surfaced for the past year, Brandt is determined that he would find and stop the killer once and for all, a killer who has managed to fool law enforcement authorities by constantly changing his MO in each kill.

Brandt’s lucky break in his quest comes when his world collides with that of Sam whose visions have practically rendered her into a thin, haunted looking waif who turns up at the police headquarters, determined that she would do her best to inform the authorities of what she knows, even though skepticism may be all that she would receive. However in Brandt Sam finds for the first time someone willing to believe what she has to say and makes her feel safe at the same time.

Being someone who has enlisted the help of psychics in previous investigations, Brandt gives Sam the benefit of the doubt and even then he is not prepared to witness firsthand just how devastating an effect Sam’s abilities have on her. As they spend more and more time together, so grows the protective instincts that flared to life right from the very moment Brandt saw the haunted look in Sam’s eyes and brings forth so many complex emotions right along with it.

But things are far from conducive to the makings of a normal relationship as Sam is brought into the focus of a killer who is cunning and wily enough to do everything in his power to wipe out the only one who has even the remotest ability of stopping him on his mission to wreak destruction.

Tuesday’s child is a novel that has so many interesting facets to it that I couldn’t help but be drawn towards the web of suspense and romance that Dale Mayer so intrisically weaves together. One of the things that held my utmost interest was the unique psychic ability explored in the story. It was horrifying and at the same time fascinating to read about an ability that has such a ravaging effect on Sam and her life. If it were me, I would most definitely have been committed to an asylum with the appearance of my first vision so to speak.

As I read along, I found myself to be in total awe at the strength and courage that emanates from Sam, and her ability to still face the next day regardless of the torture her mind and body undergoes as a result of her psychic visions. She has been alone and lost for so long that she finds it hard to believe that anyone could accept her the way she is. I loved her for all that and so much more as the story progressed and of course the way she opens up to Brandt like a shy flower blooming and basking in the warmth of the sun was something to be savored.

I loved the hero Brandt because he has the capacity to think and accept beyond the norm and has the guts to stay true to himself and what he believes in all throughout. A mama’s boy inside out, Brandt has a charm that slowly creeps in and catches you by surprise, I guess a feeling Sam herself goes through as she succumbs to the warmth, love and security that she finds in Brandt’s arms. A sexy, charming and warm hearted hero who caressed all those tender emotions deep inside of me, I would love me some Brandt any day!

And last but not the least, the way Dale Mayer handles the romantic aspect of the relationship that fosters and grows between Sam and Brandt certainly deserves a mention. I loved the fact that that rather than making it a lust at first sight relationship that explodes in the reader’s face, Brandt and Sam’s feelings are explored at a more believable pace right in line with the reclusive existence Sam has led until now. Though the scenes of passion between Brandt and Sam weren’t overly detailed and explicit, it still managed to tug at my heartstrings in a way I won’t be forgetting anytime soon.

The sneak peek at the end of the novel into the next book in the series has certainly piqued my interest and I would definitely be looking for its release which will hopefully be sometime soon. Recommended for fans of romantic suspense with a dash of paranormal to make things more interesting.

Final Verdict: Tuesday’s Child by Dale Mayer is a finely woven romantic suspense with paranormal elements in the mix that makes for a keeps-you-up-the-whole-night kind of read.

He willingly offered her every part of himself for her pleasure. Sam took full advantage. Pushing up on his shoulders, he rolled over onto his back, swinging her on top of him. Sam laughed joyously and accepted the invitation. Using her fingers, her lips and her tongue, she traced, teased, and tormented Brandt until he could stand it no more.
Without warning, Sam found herself flipped over, tucked under him, her legs hooked over his hips. Brandt waited until Sam gazed into his eyes. Then dropping his forehead to hers, he plunged deep.

Closing her eyes, she let her body answer for her. Her lips parted slightly. Her tongue slipped out to caress his thumb. Sliding first to one side then to the other. Brandt bent his head, his eyes absorbed with her every tiny movement.
From under heavy lids, Sam watched his eyes deepen, darken. Sliding her tongue further out, she slowly seductively curled it around the top of his thumb. Instinctively, she’d invited him inside. He couldn’t resist. His thumb stroked the inside of her lips, gently caressing her teeth and the inside of her lips. Sam gently clamped her teeth down on his thumb and tugged it inside. She sucked it very lightly, her eyes wider, watching him watch her.

Author Dale Mayer has very generously offered to give away 3 e-copies of Tuesday’s Child. In order to qualify for the giveaway, leave a comment behind with your name, a valid e-mail address and just drop in a line telling me why you want to win a copy. Easy peasy right? Don’t forget to leave a comment behind and help spread the word. Giveaway ends on the 19th of August 2011, 00:00 hours Maldivian time.