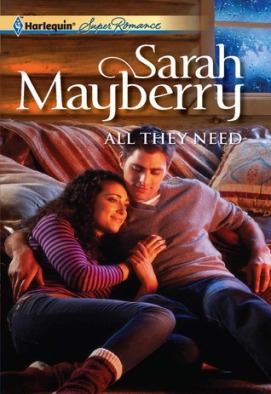 All They Need is the much awaited latest release by my favorite Harlequin author Sarah Mayberry. This story is somewhat a bit different from the last two releases by Sarah Mayberry in the sense that this is less intense, a bit more mellow and slow moving, but nevertheless makes for a great read, the remarkable ease with which Sarah manages to draw in the reader once again evident in this one as well.

34 year old Flynn Randall comes from one of the richest families in Australia. A single child, Flynn is the type of hero that makes you want to curl into a comfy little ball and sigh over. I say this because Flynn has “honor” tattooed on his forehead for everyone to see. Filthy rich, handsome and charming he might be, but he is no arrogant hero who expects each and every female within his vicinity to swoon over him. Rather, he is the type who feels things deep inside, the kind of man who steps up when his family needs him to do so, the kind of man who does the right thing even if it hurts him deep inside to do so.

31 year old Melanie Porter is newly divorced and still recovering from the number her abusive marriage has done on her. Not your average heroine Mel might be with her build that makes her tower over the average female. But to Flynn, Mel has always held an appeal even when she had been off limits, though he had never acted on his attraction towards her then.

Making a vow to herself to never make herself that vulnerable towards another person again, Mel is more than surprised and a bit apprehensive to say the least when she discovers that she might not be immune to the charms of Flynn who makes her want to throw caution to the wind and indulge. The ease with which they fall into an easy friendship with the hint of just something more was certainly one of the best things about this story.

But six years of constant verbal abuse has left its mark on Mel and her feelings towards Flynn though strong continues to be tamped down with the memories of what it was like when she was married before. But Flynn knows a good thing when he sees it, and when for the first time in his life he falls in love; the kind of love that he has wanted to feel always, being a witness to the deep abiding love between his parents; Flynn knows he would never let Mel go, even if it meant giving up his dreams of marriage and children in the process.

Although this novel too delves into a topic that touches one deeply, i.e. Alzheimer’s disease, it wasn’t the depressing sort of read but rather those bits makes you thankful for the memories good and bad that linger on in your life. Sarah Mayberry always has that uncanny ability to delve into the heart of the matter and that’s what she does even with this novel, delivering those bits and pieces that makes you want to cry and then smile all at the same time.

The enduring love between Flynn’s parents makes one yearn for a love like theirs, a love that would no doubt withstand the devastating reality of Alzheimer’s disease on a marriage that has withstood 40 years of togetherness. How Flynn and Mel find their way towards each other is a slow moving one, one that I felt was indeed appropriate for a woman like Mel who had undergone so much pain, self-doubt, abuse and heartbreak before. But once the relationship makes the turn it has been waiting for ever since Flynn and Mel lay eyes on each other, I was pleasantly surprised by the red hot bite of sensuality that Sarah weaves into their relationship so cleverly, leaving me with a hot flash or two in the process.

Like I have said before, and at the cost of repeating myself, Sarah writes stories about “real” people, whose feelings and emotions you can certainly relate to, whose sorrows you feel deeply and whose victories and happily ever after you see through with happy tears in your eyes.

Recommended for fans of Harlequin Super Romances, fans of Sarah Mayberry and fans of slow moving and yet satisfying romances.

She should have looked ridiculous, standing there wet and bedraggled in her silly underwear, but she looked magnificent. Like some kind of mythical goddess rising from the mists of time.
Statuesque, utterly feminine. Breathtaking.

She acted completely on instinct, closing the distance between them and wrapping her arms around him. He was unresponsive for a long beat, as though she’d taken him by surprise, then his arms went around her in turn.
Her breasts were pressed to his chest and every breath she took was filled with the smell of his aftershave but there was nothing sexual about their embrace. She was offering him a little comfort, and he was accepting it. It was as small and simple as that.

He was strong and warm and male and his mouth moved gently against hers, his kiss provocative and soothing at the same time. Her hands found his shoulders, her fingers gripping muscle and bone. She felt the brush of his tongue against her lips, then he was inside her, hot and wet and demanding, and a part of herself she’d pushed down deep inside came roaring to life.