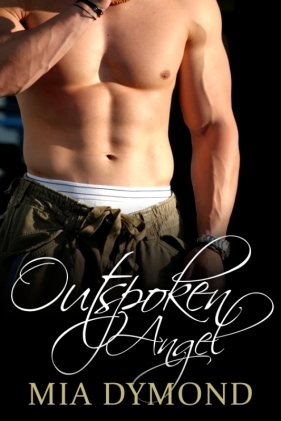 Outspoken Angel, book 2 in the SEALs Inc. series turned out to be as awesome as I had envisioned it to be; as fabulous as the drool-worthy cover this one carries. You cannot read Leather, Lace and Rock-n-Roll, the 1st book in the series without absolutely dying to read Cameron and Max’s story, which is the reason why I ended up gobbling up their story right afterwards.

42 year old Maximilian Sterling is a retired SEAL and the owner of the top-notch security company SEALs Inc. Having spent years in the military had honed him into a well-oiled machine, someone who likes order in all aspects of his life and someone who is leery of emotions. When Max butts heads with the too sexy for her own good Cameron Michelle Tremaine who is his opposite in each and every single way, Max has a feeling that life as he had known it is about to come crashing down at his feet.

Cameron has led the sort of childhood where the importance of keeping up the family name and appearances has been drummed into her from early on. Now an interior designer and an independent working woman, it is no wonder that Cameron rebels at the very thought of another man controlling her life and her actions and that is why she continues to deny her sizzling hot attraction when it comes to Max who sets her senses afire just by that hard toned body of his alone.

Though Max tries his damnedest to steer clear of Cameron and the bulldozing effect she has on his life and emotions, all bets are off when Cameron starts receiving threats and gets stalked within an inch of her life. Max swears upon his life that he would protect her to his very last breathe and moves in with Cameron just so he can provide her with the 24/7 protection that she needs.

Any true fan of romance can guess what would happen next when the gruff and tough Max faces off with the quirky and slightly out of control Cameron in her own turf and that is exactly what happens as bit by bit and chunk by chunk Max finds his resolve & control chipped away until all he can think about and dream about is Cameron under him and over him and in anyway that involves both of them sated, sweaty and too tired to think of anything else!

Maximilian Sterling is such a deliciously tough hero on the outside and a softie on the inside. He is the type of hero you can rely on to keep you safe from the demons that rage on the outside as well as the inside and he just totally won me over with his sweet and tender nature that comes out to play when Cameron needs it the most.

Cameron is the sort of heroine that makes one smile when reading about her. She is smart, sassy and has a mouth that would tempt a man to kiss it close for all the innuendos that she so finely dishes out. When it comes to Max, though Cameron has her misgivings about him, she still cannot deny the fact that she is more turned on by Max than with anyone else in her life. When Max is around, all Cameron can focus on is how fine he looks from his bald head to all those well defined abs and how it would feel to just give into the desire that has reared its head between them right from the very start.

As the danger escalates, so does the desire between Max and Cameron which reaches its fevered pitch on which Mia delivers so fabulously on. I loved the moments of passion between Max and Cameron; again Max hitting all those buttons that begs to be pushed spot on. And I find it refreshing that Mia doesn’t waste any time when it comes to professing the feelings between the two lead characters, no playing coy waiting for the other to come out and say it; which is what happens in Outspoken Angel as well.

Romantic suspense with elements of humor, sassy banter and a tough and tender hero that just about took my breathe away; Outspoken Angel is highly recommended for fans of the genre!

He pulled her to him and walked her backwards to the bed. Gently, he laid her back, and came down over her to unclasp the catch of her bra with one flick of a finger.
“Cameron baby,” he whispered, “the angels are about to sing.”

Max smoothed Cameron’s curls from her forehead and placed a feather light kiss there before he rolled beside her. While his heart beat a jungle rhythm, his soul remained rooted firmly inside hers.