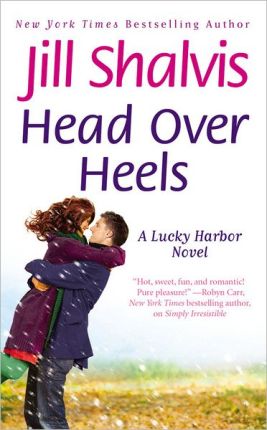 Jill Shalvis has done it yet again. With a cast of heartwarming and sometimes quirky characters, she has done a splendid job in bringing to life the story of my two favorite protagonists from the Lucky Harbor series. Jax Cullen and his toolbelt (yep, still talking about that one every chance I get), just might have to move over and make room for the big, brawny and hotter-than-sin-in-uniform, bad-boy turned Sheriff of Lucky Harbor Sawyer Thompson.

If the reaction of fellow readers of the Lucky Harbor series is anything to go by, the story of Chloe Traeger aka the wild one and the youngest of the siblings and the stoic Sawyer is the one story that has been anticipated by fans ever since the publication of the first book in the series. There is nothing like the sparks that fly between two direct opposites, who somehow eventually find that amongst the differences lie similarities between them which bind them together, especially with the hotter than fire sexual tension that ALWAYS seems a constant whenever they are together.

Sawyer is a man with a tainted past; a fact for which he has been trying to atone for, for a long time. Curbing the wild side which had gotten him into more trouble than he would rather remember, it is no wonder that Chloe with her free spirited nature clash more than once, with enough sparks flying between the two of them to singe a passerby. Sawyer might not like to admit the fact that when it comes to Chloe, his legendary cool is a distant memory, and for Chloe whose gypsy-style upbringing makes it hard for her to curb the wild streak which forever seems to land her in trouble with the sexy Sheriff, saying no is not even an option.

With her sisters Tara and Maddie, for the very first time ever, Chloe feels the stirrings of belonging and makes her long for the stability that comes with being rooted to one place. But her wild adventures makes her have to work hard to turn the image around, to win the trust of her sisters and in the process falls hard and fast for Sawyer who just makes her panties melt with one well placed scorching glance.

I loved every single thing about the 3rd book in the Lucky Harbor series. It was so much fun to see how Tara and Maddie are faring, especially Maddie who always seems to be caught in one clandestine position or the other with her fiance Jax. The most heartwarming factor of these novels of course is the relationship that seems to develop and foster right in front of your eyes when it comes to the three sisters who would never have come together if it wasn’t for their mother’s will.

Next comes my absolute favorite part of the novel to talk about. And you get 3 lucky guesses, which I am betting with everything I have that it wouldn’t be hard for anyone to guess. The uber sexy Sawyer of course who just manages to melt me on the spot with his gruff and tough nature beneath which lies a heart of gold that just made me fall head over heels in love with him right from the very beginning. And Jill has certainly achieved her goal of giving Gena the big, tough and stoic hero whom she asked for; because I for one loved every big, tough and stoic inch of him to pieces. I am telling you, there were moments in the novel that I thought if Sawyer were to get any more sexier, spontaneous human combustion wouldn’t remain a myth much longer!

Chloe is not one to be missed out on either. She is the type of hero who would just melt your heart because she is this endearing mix of wildness together with a deep yearning in her heart to belong, to be needed and to feel. With Sawyer she finds that she feels much, much more than she has ever felt with anyone, that explosive orgasm in the shower one of the best parts of the novel. How Sawyer and Chloe take care of each other with those little things that mean so darn much; needless to say Jill completely won me over with their story.

Heartwarming, toe-curlingly sexy, endearing and a whole lot of fun in between, Head Over Heels is a must read for any fan of contemporary romances and of course for the fans of Lucky Harbor series.

“If at first you don’t succeed, destroy all evidence that you tried.”  – Chloe Traeger

He was in uniform, gun at his hip, expression dialed to Dirty Harry, and just looking at him had something pinging low in Chloe’s belly.

She didn’t understand it, but everything about him reminded her that she was a woman.

“Why was man created before woman? Because you always need a rough draft before the final copy.” – Chloe Traeger

Heat skittered through her belly, then directly south. “Sawyer.”
In answer, he brought his head up and kissed her. Deep, hungry, tasting her in a purposely slow, thorough manner before pulling back to once again look into her eyes.
Oh, God. “Sawyer, what are we doing?” she whispered.
He shook his head. “No f#cking clue.”

She nodded, her gaze locked on his mouth. He could tell she wanted it on hers, and for once, they were perfectly in sync. Having no idea what he was doing, he kissed her again, another no-holds-barred, tongues tangling, rock-his-fucking-world kiss that left him staggered and her apparently unable to speak as they tore apart for air and waited for the world to right itself.
Didn’t happen.

“I’ve always wanted to be somebody. I should have been more specific.” – Chloe Traeger

“I don’t want to scare the guests with a big old guard dog,” Tara protested.
“Safety is far more important than worrying about what anyone else thinks,” Sawyer told her.
“You’re right, of course.” Tara looked at her sisters. “We’ll think about both an alarm and a dog.”
“We can borrow Izzy from Jax,” Maddie said.
“Sure,” Tara said. “And she can lick the next bad guy to death.”

Odd how one man could evoke so many emotions within her. Lust? Oh yeah, much of the time. The urge to smack him upside the back of his head? Yep, that was often there, too. Affection? She’d have said no. He didn’t need her affection, everyone admired and loved Sawyer, who was just about the most composed, self-assured, capable man she’d ever met.
But there was something suspiciously close to affection filling her now, which had her shaking her head at herself.

“The severity of the itch is inversely proportional to the ability to reach it.” – Chloe Traeger