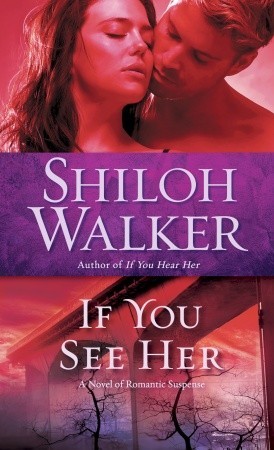 If You See Her by Shiloh Walker is book 2 in her Ash Trilogy, book 1 of which entitled If You Hear Her crept the bejesus out of me and introduced a whole lot of characters that certainly piqued my interest on more levels than one.

The small town of Ash, Kentucky with a population of 8,312 is rocked by the series of vicious murders happening in their own backyard. The whole town is shocked to say the least and the last round of violence in which Hope Carson is suspected to have beaten up her best friend Law Reilly and then nearly gone on to kill herself which shocks the District Attorney Remington Jennings  (Remy) more than he lets on.

From the moment Remy had laid eyes on Hope and her beautiful eyes filled with a fear and pain that pains him and makes every protective instinct within him want to embrace her and keep her safe, Remy knows that he wouldn’t have an easy time out of prosecuting the one woman who rouses the very primal instincts deep inside of him.

Hope is a woman who has been on the run for the past 2 years from her ex-husband. Scared and jittery as she might be, the one thing Hope vows is to never return to her ex-husband because living in the darkness that had been their marriage with no way out of it is not an experience that Hope wants to repeat. Hope doesn’t want or need a man in her life, and the merest thought of even getting close to someone of the opposite sex leaves her with a bad taste in her mouth. But Remy, the man who nearly arrests her for a crime she is innocent of is the one man to whom she has a difficulty showing her indifferent side to.

If You See Her is an installment in the series that contains very little of the elements of suspense that made book 1 such a hit towards the end. I missed the presence of the creepy killer and craved to know more about him because Shiloh has certainly done a swell job of creating his character, leaving the readers practically tied up in knots trying to guess as to who the killer could be. So needless to say, when the killer didn’t make much of an appearance in the story I felt cheated out just a bit.

Rather than focusing on the suspense element, the novel delves deeper into the growing relationship between Hope and Remy and continues to reveal the different facets of the multitude of characters that bring this trilogy to life. There are family problems, there are problems between friends, and then there is the budding romance between Remy and Hope where Remy forces himself to tread very carefully in order to win a woman who has seen more than her fair share of violence and depravity.

The moment I fell in love with Remy was a bizarre one. It was the moment that Remy let Hope take the lead role in emerging as an independent woman, a person who is more than capable of starting out on her own even if fear continues to walk right along with her on her quest to assert herself. It was how Remy went against his instincts and let Hope do her thing, let her be herself and let her come out of the shell she had hidden herself in to emerge as a woman who is breathtaking as she revels in the freedom that being with Remy brings her that I knew Remy was definitely the man for Hope.

It is always a must to appreciate how Shiloh brings the passion between her characters to life, and I reveled in every minute of how Remy and Hope finds that special someone in each other and forges that deep connection with each other that made me just a teeny bit envious even as I rejoiced in their love.

If the suspense element had been more, if the pace of the story had been just a tad faster, I would have definitely enjoyed this a lot lot more. But having said that, If You See Her is still a decent addition to a trilogy of which the last book I have already started on in my quest to get acquainted with the killer and finally find out who Shiloh has so masterfully created and hidden in plain sight so very well.

Recommended for fans of the series and fans of Shiloh Walker.

One kiss, he told himself.
Just one easy, quick kiss.
He had plenty of control.
He could control his temper, his hunger, his …
Her mouth opened under his and she met his kiss with shy, sweet hesitation.
Remy felt like the very ground had crumbled under his feet.
Oh, hell.

He pushed up onto his heels and then pulled her up against him, one hand cradling the nape of her neck, the other splayed wide over her back. His mouth came down on hers and right before he kissed her, he muttered, “Fuck, you’re going to drive me insane, I know it.”
Then his mouth crushed down onto hers. His taste was different—darker.
Her, she realized. He tasted of her.

Man, she loved the way Remy smelled. Male … warm. Expensive. Idly, she noticed the same scent was on her, now. It was the soap he used. She’d discovered that in the shower when she lathered up with it. The smell was borderline intoxicating on him, not so much on her. Absently, she stroked her hands up and down his sides.
“Hope, you’re making it very hard for me to have a conversation here.”
“Hmmm?” Tipping her head back, she glanced at him through her lashes, saw that he had a look on his face that was rapidly growing familiar.
That lovely blue was heated, his lashes low over his eyes. And she found herself wanting to push up on her toes and tug his head down close enough to kiss him.

Then he kissed her again. When he licked her through the silk, she moaned. Catching the fabric, he tugged it aside and licked her again. “Hot … fuck, yeah, you’re hot.”
Hope shuddered and fisted her hands in his hair again. But this time, she tugged him closer, gasping out his name.
He smiled against her and then proceeded to do to her what she’d been doing to him from the first time he’d laid eyes on her—driving him out of his fucking mind.