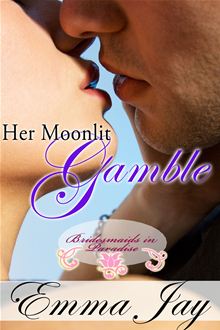 Joslyn Alexander and Andrew Norris are best friends. Joslyn is a trauma nurse and Andrew ex-military, having been honorably discharged from service after ten years. Andrew agrees to be Joslyn’s date at the wedding because for Andrew a trip to Hawaii sounds like the perfect opportunity to unwind. For Joslyn who has Andrew placed in her friend zone, attending the wedding with him by her side is going to be nothing but fun and lighthearted enjoyment at best.

But what Joslyn doesn’t factor into the trip is just how easily the sun, sand and the sea can work its magic and lure her into seeing those qualities about her best friend that she has always forced herself not to look at too closely, and just how easy it is for her to succumb to the light of desire that flares up in Andrew’s eyes. But it is Joslyn’s fear that she might lose the most precious person in her life if complications were to sour their relationship that holds her back until she is ready to make the ultimate sacrifice of giving all of her to the man she loves.

I loved Her Moonlit Gamble just like every other novella in the Bridesmaids in Paradise series that I have read and adored. Its hard not to love characters who are down-to-earth, honest and real in the sense that they are easy to fall for. Joslyn even with her hangups about losing her best friend seems unable to walk away just like that and when she does make the biggest blunder of all, she practically moves heaven and earth to make things right with the man she knows is the perfect fit for her.

I have read a lot of stories featuring ex-military heroes just like any other avid fan of romance reading must have. What makes Andrew different from the rest of the heroes is the fact that he seems to be pretty well adjusted to what he must have gone through touring Afghanistan and that was certainly a refreshing change. Maybe his coping mechanism lies within the thrill of adventure that he continually seeks with his partner Joslyn by his side. Either way, I found the fact that Andrew was the character in the story with lightweight baggage to be one of the reasons that I fell for the story.

Emma Jay has a knack for writing stories of short lengths. And the one thing that she does well is always bring enough emotions to the story to make it work for a novel of this length. Just the right touch here and there to make things go down like a cool glass of water with a tinge of lime in the mix on a hot sweltering day. I loved the fact that the beginning of the story was focused in bringing the characters to life, i.e. to let them explore the new sensations that came to life between them and to let them get adjusted to becoming something more after being friends for so long. I loved the heat that exploded onto the pages right afterwards and oh dear lordy, you’ve got to read the scene on the balcony if nothing else that practically explodes on the balcony if nothing else. Emma Jay certainly lets the two make up for lost time and there wasn’t one bit of me that wasn’t revved up right along with them.

Hot, smooth & intense; just the right touch for a novella.

She lifted her hand and licked the liquid from the side of her hand. Andrew made a sound, his gaze on her breasts. The next thing she knew, she was flat on her back in the sand, and he was over her, braced on his arms, the muscles in his shoulders bunching as he stared down at her as if he was trying to figure out who she was. Then he angled his head and covered her mouth with his.
When they stepped through the door, he turned to her, his hand sliding behind her waist, pulling her close. He didn’t kiss her right away, just looked into her eyes, giving her a chance to back away. Though she quivered with nerves, she stood her ground, and he bent his head to kiss her.
Not at all what she expected. Instead of hunger, there was reverence. Instead of desire, there was tenderness. His thumb brushed her cheek as his lips molded hers, as his tongue traced her mouth, tapping against the tip of her own before retreating.

And then he was, lifting her hips in his hands, thrusting into her in short, eager strokes, the wet sound of their joining bouncing off the walls of the balcony, off the balcony above, but Joslyn didn’t care. She met his strokes with eager thrusts of her own, curved her hands around her own breasts, rolling her nipples between her fingers.
Andrew choked and stilled, deep inside her, just to watch her. “Sweetheart. Jesus.”

She tightened her legs around him, holding him flush against her as she came, and came, and came, rolling against his hips, pleasure bursting in pulses that made her whole body jolt. Only vaguely was she aware of his need to move, and she loosened her grip enough for him to plow into her, hard, sending the table scooting across the concrete in loud screeches until it bumped up against the edge of the balcony and he stopped, balls deep, his orgasm pouring through him and into her.
He didn’t leave her body, but scooped her up in his arms and held her against his chest for a long kiss, before he walked with her, still joined, into the bedroom.

Once he’d snugged the condom on, he gripped her hips, pulling her forward, over him. She went willingly, centering over him, and he guided himself to her opening. She hovered over him for a long moment, until he thought he’d have to beg, but then she took him in, deep, in one slick movement, driving a cry from him. She was so tight, so wet, so fucking gorgeous as she loomed over him, her hair wild, her breasts swaying, her hands braced on his chest.