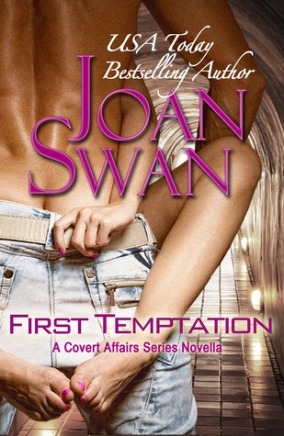 Supervisory Border Control Agent Zoe Brooks gets tangled up with Agent Taft Walker from the Counterterrorism unit of the Department of Homeland Security in a joint quest to bring down Mexican drug smugglers of the El Diablo cartel.

From the moment Taft and Zoe meet, sparks fly, regardless of the fact whether they both want it or not. Going undercover as the owners of a sex toy shop might be pushing Zoe’s comfort zone a bit more than she would like, and given the fact that her emotions are all over the place of recent, Zoe knows that she would have to up her game just that much more if she is going to prove her worth as a fresh undercover agent.

The lust that spirals forth, scorching and undeniable is one thing that both Taft and Zoe never factors into the equation in working together. Taft is sexy, confident and phobic of any sort of commitment beyond that of a night of pleasure but Zoe seems to push all his buttons in the right way that seems to make him panic and soothe him all at the same time.

While Zoe and Taft try to find their footing amidst the passion that refuses to be denied between them, the web of danger that surrounds them continues to thicken, with Zoe being the centerfold of all that danger. Though Taft would like nothing better than to protect her from harms way, how he reacts to the danger and the need to protect Zoe could mean the end of whatever it is that is between Zoe and himself before it is even given a chance to flourish.

This is my very first Joan Swan and I would have to say I liked her unabashed style of writing and the sex scenes that definitely stirred more than just Taft and Zoe. Taft and Zoe definitely cannot be blamed for having lackluster sex; they are practically all over each other and tends to find themselves in the most interesting spots to get it on!

Though everyone advices never to judge a book by its cover, I know most of us are guilty of just that and I requested for a galley of this because the cover hinted at the deliciousness that was bound to come. I am certainly glad that this novella gave me a bit of an insight into what Joan Swan can do and has definitely whetted my appetite enough to pick up more of her books to read.

Recommended for fans of romantic suspense with singeing passion that rocks you to your toes!

She stretched, sliding her body along his slowly, feeling every swell and groove and plane before she pressed her lips to his. His mouth remained firm, chaste. His eyes remained open, but a clear new awareness burned hot.
She tugged on his neck, pulling their mouths flush, and licked his bottom lip. His hands fisted in the waistband of her slacks.
She gazed into those blazing golden eyes and pulled back just enough to whisper, “Are you on board, Walker, or not?”
He growled. Opened his mouth. Closed his eyes. And really kissed her.

Zoe used her arms to rock her body into his touch. “Taft…”
He bit her ear, then whispered, “I’m going to make you come, but we’re not done. Not even close. I’m only giving you relief. And prepping you for the next one. And the one after that. I’m going to keep going until you come so hard you scream.”
Zoe whimpered. She opened her eyes, unable to believe the sound had come from her own throat. Then Taft pressed two of those thick, practiced fingers inside her, and Zoe couldn’t focus on anything but the way he filled her.