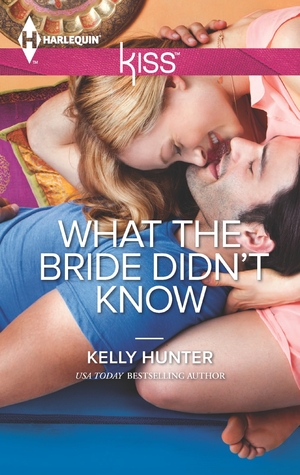 What the Bride Didn’t Know by Kelly Hunter is a novel from the Harlequin’s KISS line, novels that are fraught with sexual tension of the sizzling kind that melts you on the inside. Thankfully, this one didn’t just create the sexual tension, but delivered on it to appease readers like myself just enough so that we would finish the book with a smile on our face rather than a frown which would have been the case otherwise.

Adrian Sinclair or Trig as he is known as is Lena’s next door neighbor and they have a history that spans both their childhoods and beyond. Though Trig has always had a thing for Lena, and that is to put it mildly; the one thing that has held him back is the fear that Lena might not want the same thing when it comes to him. Of course there is also the fact that Trig is best friends with Lena’s older brother Jared which means that there is the darned bro code to adhere to as well.

Fast forward their relationship to a couple of years down the line and the dynamics of the relationship between Trig and Lena seems to have shifted, Lena having been injured while on a mission and Trig taking on the task of sticking to Lena’s side no matter what. It is Lena’s sheer dogged determination to search for her brother that finds both Lena and Trig in Istanbul facing a situation that neither Trig nor Lena ever thought they would find themselves in.

When a series of events ends up in Lena suffering from temporary memory loss that renders her to believe that she is married to Trig, well lets say all hell breaks loose between these two as both Trig and Lena tries to do things right by what they believe, Lena hellbent on seducing her seemingly reluctant husband and Trig trying his darnedest not to take advantage of the fraught situation they both have landed in.

What the Bride Didn’t Know has a lot of elements that made it the swell read it turned out to be. There is that undeniable thread of humor interwoven into the fabric of the story that made the book hard to put down. I kept smiling through even what you would call the most serious situations in the book because Kelly demanded no less with characters like Trig and Lena who have both got that sarcastic humor thing down to a pat.

Trig is an adorable hero, and I am certain Trig would skin anyone who dares say that out aloud. He is the larger than life variety of hero whose gentleness might be found at odds with his size, but that is what in effect makes Trig such an endearing hero. His love for Lena is as unwavering in strength and as immovable as he is in his determination to stick to Lena even when the going gets tough. And that in essence proved to me even without the whole story seeing its way through, the sheer beauty of Trig’s love for the woman whom his heart had claimed as his a long, long time back.

Lena’s character prior to her amnesia wasn’t one I liked overly much. She was prickly, overly sensitive, and I could understand her reasons for it because she had always been someone who could keep up with Trig and her brother no matter the circumstances. While I am leery of most books that resort to using the amnesia plot to bring the hero and heroine together, I found that this one had a fresh twist to it in the sense that Trig doesn’t try to use the lack of memories on Lena’s part to show her just how good they can be together. In fact, Trig goes out of his way to not get into any situations that would in the end slap him on his face once Lena gets back her memory and that to me showed that Trig was an honorable man, a man who would wait out an eternity if it means convincing the love of his life to share their tomorrows might not prove to be a piece of cake once she is in a sound frame of mind.

I especially loved the honest conversations that to took place between Lena and Trig, especially Lena who might never have resorted to opening herself up to that extent where Trig or anyone else is concerned. I believe that the lapse in her memories truly gave her the opportunity to face her fears and insecurities and really heal from the emotional scars left behind by the physical injuries her body had suffered and gave Trig a fighting chance in proving to her that when it comes to Lena he would always be there for her, no questions asked.

The bit that cinched the deal for me? The epilogue that made everything come together. Because everyone knows I am a sucker for a good epilogue!

Recommended for those who love sizzling sexual tension, an adorable and sexy hero and a gutsy heroine who makes you smile all throughout.

Final Verdict: Loved the snazzy humor and the sizzle! No wonder Trig and Lena makes for such a fantastic duo.

Trig smiled at that and she reached forward and covered his hand with her own. ‘Don’t give up on me.’
‘Never.’
This was why she’d married this man.
‘I feel as if I’m in a place where I don’t have to run to keep up any more,’ she confessed. ‘I can’t run any more. Best I can do is hold my ground and stumble along, and you know what? You’re still there for me, and my family is still there, because it was never about me keeping up. It was about me believing that I belonged and I do believe that now. I’m happy now. I married you, which I have to say is probably the smartest thing I’ve ever done.’

‘You love this room,’ he said with a crooked smile as she rose from the table, caught hold of his hand and tugged him towards the pianola.‘I really do. It’s a little bit beautiful, a whole lot fascinating, and kind of cracked when you look up close. I’m hoping it might be the way you see me. Because, newfound sense of belonging or not, I’m still trying to figure out what you see in me.’