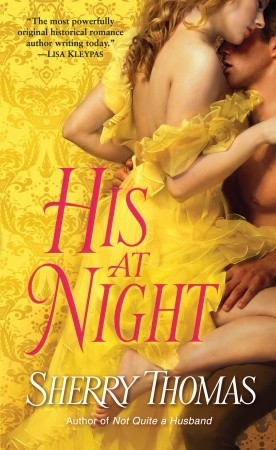 The girl of his dreams. He had met her at last.

So as you can see from the last couple of reviews of mine, I went on a Sherry Thomas reading binge because that is exactly the sort of thing that happens to me if I get addicted to the books of one particular author. Unluckily for me, Sherry Thomas doesn’t have a long backlist of books for me to wade through one by one but hopefully I’d always have the pleasure of reading each and every historical romance that she publishes because there are very few historical romance authors that I follow as diligently as I do with her books.

Lord Vere is a man who leads a double life or to be precise a man who fools even those who are closest to him to serve the country and the Queen. The deep abiding loneliness that is a resultant effect of the lifestyle that he has chosen to lead might make itself known every now and again, but Vere has always has his dream of the peace that he someday might find with him to keep the monsters at bay. And then his path crosses with that of Elissande Edgerton which throws him for a loop and changes his destiny in a way that he has never thought possible for a man like him.

Elissande is a woman who is desperate and willing to do whatever it takes to get away from the oppressive thumb of her uncle who has made an award winning actress out of her, able to hide her real emotions in the worst of situations. When fate throws Lord Vere her way, Elissande tries every trick that she has under her sleeve to secure a way out of the household, with the clock interminably running out on her.

Forced to enter into a marriage of convenience, Vere would like to feel nothing but contempt for the woman that he married, but time and yet again Elissande reveals the true face of the woman behind all the pretense, and at the same time unmasking him from the role that he willingly plays in front of everyone else. With Elissande’s uncle promising revenge and vengeance to get back at her for besting him, time to forge an actual relationship with her enigmatic husband is a scarce one, except for the times he unwillingly turns to her in passion for her that he cannot deny.

His at Night is quite different from the rest of the books that I have read from Sherry Thomas such that this story focuses more on the mystery element and setting than the developing feelings between Vere and Elissande. Even then, His at Night made for an engrossing read that was hard to put down.

One can only surmise just how tiring it must be in actuality to live a life that is not really your own, assuming a persona that is your very antithesis day in and out. The toll that it takes on Vere is more than evident, the cynicism that he wears like a cloak around himself one that makes him oblivious to even the best of things in his life. His quest for finding inner peace by seeking justice is one that doesn’t seemingly play out as he envisions it, thus the crust of his distrust when it comes to his newly wedded wife.

Elissande might not be proud of the way that she married Vere but she would do it again in a heartbeat if it means freedom for which she has longed for all her life. But her deceit does come with a price attached to it, the price of the withheld affection on her husband’s part and the hope that he crushes out of her even when she should know that hope is futile. Her struggle to find common ground with Vere when he makes it almost impossible was one of the many reasons why I fell in love  with her character.

Though not your usual run of the mill variety of romance, His at Night still gives you a story steeped in mystery, double lives, treachery and mayhem with romance to round it off. If you are a fan of the type, this one is for you!

Final Verdict: An engrossing tale that keeps you turning the pages.

He was a god above her, powerful, beautiful, larger than life. The light brought out the latent gold of his hair. The shadows contoured the perfect form of his body. Light and shadows converged in his eyes, bright lust, dark anger, and something else. Something else entirely.
She recognized it because she’d seen it in the mirror so many times: a bleak, austere loneliness.
Her hands, which had been clutching at the sheets, moved up his arms. “I never pretended it was anyone but you.”

He ground into her with enough force to launch an ocean liner. And bucked and shook as if in pain, exquisite, breathtaking pain.
She opened her eyes again to see him looking down upon her, the way he would a cursed treasure. He lifted a hand and traced her brow.
“Now you are mine,” he said softly.
She shivered.