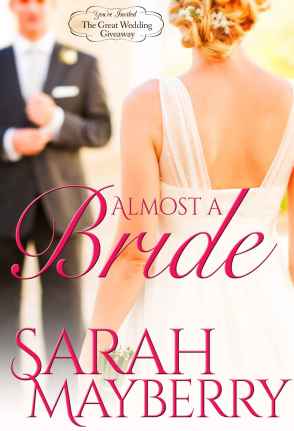 Almost a Bride by Sarah Mayberry is one of those novels that managed to put a smile on my face, not the least of it because Sarah wrote it; that is always a reason to cheer on. Though this novel is a tad shorter than the SuperRomance novels that Sarah usually writes for Harlequin, the story nevertheless carried the punch that always comes with a book from Sarah and I loved every minute of it.

Tara Buck and Reid Dalton have been partners for over a year at the Bozeman Police Department. Tara who is engaged to be married to her fiancé Simon finds her world turned upside down when she finds out in the worst possible manner that Simon had been cheating on her. Tara, who had always played it safe and done the right thing to avoid just that from happening suddenly finds herself at a loss on how to deal with the vortex of emotions and self realizations that her life becomes from that point onwards.

Reid is a wanderer, one of those people who suffers from itchy feet syndrome on staying around one place for too long. It is a family emergency that brings him back to his parents in Bozeman and from the minute he had walked into the Bozeman PD and laid eyes on Tara, there had been that electrifying connection that had happened between them, which ever since had been forged into a solid friendship, a line that Reid dares not cross, especially when Tara is vulnerable and hurting. But then again, in the matters of the heart, there is no saying what can happen when two people who are obviously meant for each other suddenly finds that nothing is stopping them from exploring what might be.

I loved Reid and Tara. Sarah has a way of creating heroes who are earthy and so sexy that even their mere presence alone makes one hum a bit every now and then. And Reid was just one of those heroes who could electrify a page just by merely walking into it. Yep ladies, he was that good.

Tara was just lovely; no two ways about it. I could actually feel the pain that she must have felt, the sense of betrayal and later on her confusion when the self realizations had started to hit her. What you get when you pick up a Sarah Mayberry is a romance with two rational people, who can actually communicate with each other and solve problems. But that doesn’t mean Sarah doesn’t toss in a bit of angst every now and the to her stories. On the contrary this one had its moments too which I absolutely reveled in.

Recommended for fans of Sarah Mayberry and those who love friends to lovers romances.

Need driving her, she straddled him once again and guided him into place. The exquisite pressure of him filling her, stretching her, made her clutch at his shoulders as she took him all. His hand slid to the back of her neck, squeezing lightly.
“Give me a second,” he said, his voice very low, his hand holding her still.
She understood. She’d expected it to be good, but she hadn’t expected it to be profound.
This felt right. Right and so good and absolutely essential.

He broke from her briefly to push them all the way down, helping her do the same, then he set her on the arm of the couch and slid inside her. She wrapped her legs around him, kissing him avidly as he began to move.
“You feel so good,” he whispered in her ear. “I want to do this forever.”
“Yes.”