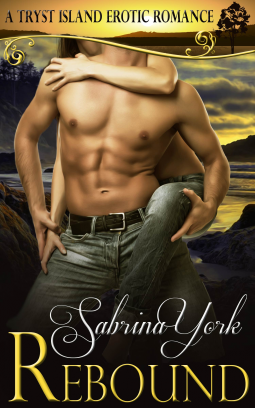 Rebound by Sabrina York was my first experience of Sabrina York and boy, what a wild delicious tingly ride that was. Rebound tells the story of Kristi Cross who had just ended things with her a-hole of a boyfriend and turned up at the vacation house she shared with a couple of her college buddies for some much needed downtime. What Kristi doesn’t plan on is sharing quarters with her long time crush Cameron Jackson who has always made her heart beat just a little faster and her palms sweat with lust and wanting.

When Kristi finds out that Cameron might harbor the same sort of feelings towards her, all bets are off in the exploration of their mutual desire for each other which practically burns the pages up! Sabrina York definitely knows to do sizzle well and does she do it ever so well! I liked the emotional aspect of the story that developed at the same pace as the physical aspect. And being a sucker for a friends to lovers romance, well lets just say this book wooed me beyond my expectations.

All the books in the Tryst Island series sounds like they would prove to be entertaining and helluva sexy reads that I would love to check out. If you have got time for a quick sizzle filled read, take this up and indulge. You just might find yourself in need for a swim to cool off after. Recommended!

“You too,” he commanded and then all thought escaped him as she complied, yanking her blouse over her head without even unbuttoning it. “Holy fuck.”
All he could do was stare. Stare at her exquisite breasts, full and heavy and cupped in some kind of Victoria’s Secret torture device. Torture for men, that was. Her bra was lacy and black and had tantalizing curlicues that framed her milky globes in a way designed to drive a man insane.

If he wasn’t mistaken—and he didn’t think he was—she’d come. Just then. To a tiny touch.
Holy. Fuck.
Insanity raged.
Need raged.
Pounding passion, a mindless urge possessed him.
He flipped her over and yanked down her panties, so she stood before him, bared to him, bent over the table, legs splayed as far as her pooling jeans would allow. Without a word, he unzipped his jeans, yanked out his cock, and thrust it home.

Cam didn’t bother to worry that anyone upstairs heard. He didn’t care. He didn’t care about anything but swamping her, filling her, flooding her.
And it came. He came.
Hot, scorching, delicious release. Sweet relief, twined with the most powerful bliss he’d ever known.
Because he was in her.
In Kristi.
The way he’d ached to be. Finally.
And she’d been magnificent.

His cock swelled.
His hips churned.
Her body wept.
Sanity fled.
Somewhere in the deep miasma of roiling bliss, she felt the hot rushing tide of his orgasm as he flooded her. She gloried in it. Welcomed it. Jet after jet of scalding passion. All for her.
It seemed to go on forever.