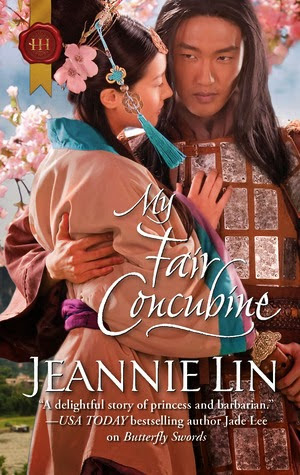 Jeannie Lin is one of those authors that writes romances that speaks to your heart. Her writing is flawlessly beautiful and China as the setting provides for that exoticism that is unbeatable. My Fair Concubine is the third book in the Tang Dynasty series and explores the story of Chang Fei Long, a nobleman and Yan Ling, a baby abandoned at a tea house where she had grown up, knowing no life except one of servitude.

Fei Long wants to save his family’s honor and is at a loss as to how to go about it when the idea strikes to make use of Yan Ling to do so. Fei Long has just three months to turn Yan Ling into princess material, to teach her the etiquettes and way of life that would be required from her when she is given to the people of Khitan as princess bride to forge political ties with China through an arranged marriage. What Fei Long doesn’t expect is for him to want to break every single rule he has set for their brief partnership and claim Yan Ling for himself. But as life would have it, many a hurdle needs to be crossed before that particular dream would be realized.

I have no idea why I skipped on reading My Fair Concubine and jumped straight to The Sword Dancer, the 4th book in the series. Either way, My Fair Concubine turned out to be a beautifully spun story with enough angst, finely wrought sexual tension and the intricacies of Chinese politics and life in the Tang Dynasty that I just adored.

I loved both Fei Long and Yan Ling. Fei Long is man who practically has honor stamped right into his DNA. Yan Ling is the woman who grew up as a servant, whose inner fire, courage, wit and wisdom makes her the right fit for a man like Fei Long. The control that Fei Long exerts on his self and emotions was such a turn on if you ask me. I love a hero who is reserved. There is such a wealth of passion hidden inside characters of that sort and I just loved what Jeannie had to offer with Fei Long. When it comes to Fei Long and Yan Ling, there’s so much to be said for the near miss caresses, the fervent longing in each glance and this intricate dance was done superbly well which reached its ultimate climax the moment during which all that control shattered under the strength of Fei Long’s hidden passion for the woman he loves. And oh my stars; what a magnificent moment that was!

I adored the colorful secondary characters like Dao and Li Bae Shen that gave this story the wholesome edge to it that it deserved. The historical tidbits and the exotic feel to the entire setting itself was one I continued to lap up like someone who was starved for just that. If history were ever to be written with such flare, I don’t think I’d ever have a problem with buying a ton of books on the subject and holing myself up somewhere for days.

This review wouldn’t do justice to the story without mentioning the scenes of passion towards the end of the story; oh boy! I was feeling quite peeved about all the heightened sexual tension in the novel with no way of breaking the promises that held Fei Long and Yan Ling from acting on their desire for one another. And when Jeannie Lin delivered on all that, sigh, I swear I just near about swooned and rightfully so if you ask me. All those hours of calligraphy lessons? Totally worth it. And that alone is reason enough to buy a copy and indulge in my opinion. Well done Ms. Lin, well done.

Final Verdict: The prose, the angst and the delivery alone attests to Lin’s mastery. Recommended!

He placed the brush back into her hand. She knew she was gripping it too hard again as she dipped it into the ink stone, but it was the only way to keep her hand from shaking. Before she could place the tip to the paper, Fei Long moved behind her. She closed her eyes as his hand rested against her shoulder to straighten her back. His other arm circled temporarily around her to position the brush and she flooded with fever. Her toes curled with the ache of it when he moved away.

She stood in a panic, keeping herself turned.
‘I have to go.’
‘Yan Ling.’
His voice was louder this time. Closer.
She tried to slip past. Wouldn’t look even when his hands closed around her shoulders.
In the next moment, she caught a glimpse of Fei Long’s face, of his dark and tortured eyes. A muscle tensed along his jaw before he lowered his head.
Her breath rushed from her at the first touch of his mouth. His hand lifted to slide over the back of her neck while his kiss soothed over lips still sensitive from the rough scouring she’d given them. Yan Ling trembled, confused. A lost sound escaped from her.

Suddenly, his hands tightened over her hips. He held her so fiercely it was nearly painful. She could feel the heat of his skin and the taut coil of muscle and sinew through his robe. A shudder ran through him.
He pulled away roughly then, holding her at arm’s length when he couldn’t get enough of her only moments earlier. His chest heaved as he stared at her as if he didn’t know what had just happened. But she knew, in every part of her, to the very tips of her fingers and toes.
‘Forgive me,’ he breathed.
It was the first time he’d apologised since she’d met him. For the one thing she’d wanted more than anything else for him to do.

‘I would give it all up,’ he rasped.
She must have heard wrong. Her throat closed so tight she had to fight for the next breath.
‘I would give it all up for you,’ Fei Long said again, stronger this time. She staggered back a step as he came forwards. ‘Yan Ling.’
He closed the distance between them. His hands came around her waist and his eyes darkened with an unfettered hunger she had never seen. Their bodies brushed as he pulled her close.

It wasn’t long before he was backing her deeper into the cover of the trees. Not long before his hands secured themselves against the small of her back and she was being guided down. Soon she was lying with her shoulders flush against the cool grass. The coarse blades tickled against the back of her neck and she could see fragments of blue sky between the branches above.
Fei Long leaned over her. His face, so familiar now, filled her vision. Masculine and beautiful in its harshness. He captured her mouth again, one hand cradled at the back of her neck to lift her to him. His other hand was braced against the ground beside her shoulder, securing her beneath the weight and pressure of his body. As if she’d ever want to escape.

She exhaled in a small gasp, her back arching willingly. Her hips lifted until they brushed against his. In response, he pressed his full weight upon her. She could feel him. All of him.
His mouth sought her throat where he tasted her first with his tongue, then the sharp edge of his teeth. She shuddered as he devoured her. There was nothing reserved about Fei Long out here. He’d left his careful detachment in the confines of the study. This passion was for her, and her alone.

Her head fell back in surrender, but Fei Long was there to catch her. His other arm circled her now with his hand splayed against her back to keep her upright. She closed her eyes, shaking her head in denial, because the sheer torture of this was senseless. He commanded her with nothing but this single, unending caress and it became everything. Cruelly, inexplicably, everything.
She cried out as her body tightened. Fei Long crushed his mouth to her and she sobbed against his lips. Her inner muscles clenched and unclenched as she shook inside and out.

Then he pulled away and her hand slipped free. There was no trace of tenderness in him as he stood. His expression was heated steel as he removed his trousers. He untied his hair as well and for a moment stood naked over her.
She took him in, all of him. Her mouth was painfully dry and even swallowing didn’t banish the knot in her throat. This was what she had wanted to know— the sight of Fei Long when there were no more boundaries between them. She took the vision deep into herself. It would always be there, no matter what the morning brought.

She pressed her lips against his throat and tasted the salt of his skin. The thrust of his body took on an exhilarating urgency, a riotous intensity that she could feel through the height and breadth of her body. There was no time to think. Only feel.
He was taking everything, just as he promised. Just as she wanted.
She wrapped her legs around his hips and held on.

“Do you know how many times I agonised over this part of your neck or this one ear?’ His mouth brushed over her neck before he took her earlobe between his lips, sucking gently. A shiver ran down her spine, making her breath catch and her toes curl restlessly. ‘You would gather your hair with your hands and sweep it over your shoulder to keep it out of the way before you’d begin to write. And I’d watch you, barely able to breathe.”

“Yes,’ he shuddered as he beseeched her. There were no words for what he wanted, but she wanted it too. ‘Yan,’ he pleaded.
Yan Ling pushed back against him as hard as she could as every muscle within her tightened. His muscled body formed a brace for her in her passion. She cried out, the sound strained within her throat. A vindicating and final rush of pleasure arched through her. An exquisite pain beyond thought.