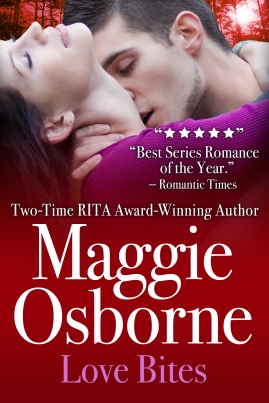 My fascination to do with Maggie Osborne is something that I would never deny. From the moment I picked up her novel Silver Lining, there was no looking back for me. To me, Maggie Osborne is synonymous with novels that takes you to places where authors normally don’t. Her unusual heroines with their inner core of strength, and very real faults; they make for the kind of characters that you root for, from the very bottom of your heart. Every review I have done of a book by Maggie Osborne has always ended with me bemoaning about the fact that she stopped writing. So imagine my delighted surprise when I found that this book was released on Smashwords late September of last year!

Love Bites is Maggie Osborne’s first foray into romance of the paranormal variety if I am not mistaken. Because I have not read her complete set of novels, I might have missed out on other genres that she ventured into way before. That being said, Trevor d’Laine is the vampire in this novel, a vampire with his own talk show, delivered at night of course. His advertisement for a live-in assistant, a Renfield to his vampire, is what brings Kay Erickson to his doorstep and into his life.

Trevor is determined that he would never ever fall in love again. Years of loneliness that has passed since the bleakness that is his past makes him wary of taking that step. And there is that secret that he carries around in his heart, of why he became a vampire in the first place that would never make him want to take a step to reverse all of it. But all that changes when Kay begins to get under his skin in a way he didn’t think it was possible, and makes him lose perspective on what he has believed to be true ever since he turned into a vampire.

Kay lives in a bubble of her own making until meeting Trevor changes everything. Every single thing she has believed about life, love and lust takes a hike upon meeting Trevor. And that proves to be a game changer for someone as steady, dependable and perhaps a bit boring like Kay, but someone who yearns for adventure, love and passion of the kind that would blow her mind. In Trevor she finds all those things, but the danger that becomes all too real when it comes to the mission they embark upon makes the situation doubly precarious.

While I liked Love Bites, I can’t say that I fully loved the story or could accept where it eventually led me to. Perhaps it has got something to do with Maggie Osborne’s take on the vampire lifestyle. Vampires are made out to be characters who cannot stay true to what they are, because there are so many drawbacks to their lives, the soul deep loneliness and inability to love for one? I just couldn’t understand why they couldn’t just stay the way they were and still be able to love, feel and whatnot.

The other thing was the gravity of the sacrifice Trevor makes to be with Kay. Obviously with all the “negativity” with which Maggie Osborne paints the life of a vampire, Kay didn’t or wouldn’t have wanted to become one. Why become one when the love that made you want to take that step withers away after centuries of being together? Revealing Trevor’s sacrifice would mean giving away a huge spoiler, but let me just say this – I cannot help but question whether or not Trevor would regret the sacrifice he made somewhere down the line. I just cannot help but sigh a little bit with regret over what could have been if otherwise.

I would say Love Bites has a “happy ending” depending on the way you look at it. Well, it was a happy ending in one sense. But in another, it just seemed an uneven happy ending to me! While Trevor was an absolute darling, I couldn’t bring myself to love Kay wholeheartedly. But Maggie Osborne’s writing? Absolutely magical in places where it mattered.

Recommended for fans of vampire romances. This one definitely has a unique take to it!

Kay’s heart stopped as she stared up at him. He no longer reminded her of an impish boy wearing plastic teeth. This was a man. An aroused man staring at her throat, listening to her blood accelerate in her veins. His shoulders swelled, and his expression was sexy and dangerous and wildly exciting.
A great thrill of weakness spread through her limbs and she couldn’t catch her breath. As if her body had become heavier, her hips sank in the water and her toes found the bottom of the pool. She stood on shaking legs, breathless and unable to move, and gazed helplessly into his glowing eyes.
The desire she saw there set a match to her trembling body and lit her on fire.

The cool touch of his hands on her burning skin, the feel of his hard full thrust straining the thin material of her swimming suit, the mesmerizing smolder in his flaming eyes, the touch of his hand stroking her breast, all combined to render her frantic and helpless. Dizzy erotic hungers whirled in her mind, scalded her thoughts.
Gasping for breath, blood pounding, all she could think about was the desire that knifed through her like a hot blade. She wanted him to rip aside her swimsuit and plunge inside of her, wanted him to sink his teeth into her bared throat and take from her whatever he needed. She wanted… oh God, she wanted!

He yearned to taste her life, her soul, to drink her into him. He craved the rapture of fulfillment that her blood could give. Swept by passion, he saw only the thin tissue of rosy skin between him and the rich red blood that roared in his ears.
As he approached climax, his mouth opened instinctively and his teeth extended a final distance, a reflex beyond his control. His body shook with an urgent need for release, driven by an almost desperate need to suck and drink.
As his body erupted, Trevor veered away from her bared throat and he buried his teeth in the pillow beside her head. Trembling violently, he collapsed on top of her, pushing the torn pillow aside. Her arms stole around him, and she held him tightly until both of them stopped shaking.